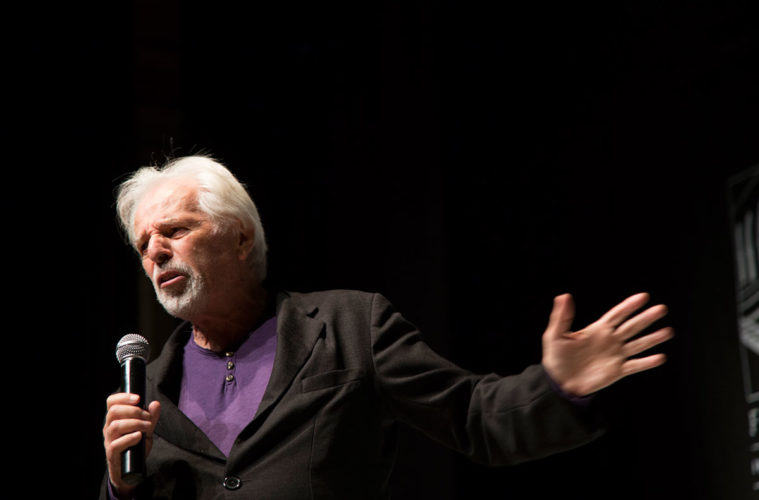 Alejandro Jodorowsky, the eccentric Chilean filmmaker behind surreal works like El Topo, Santa Sangre, and The Holy Mountain, has finally returned this year. He was the subject of a documentary, Jodorowsky’s Dune — one of the year’s best — which chronicled the artistic vision of his never-realized adaptation of Frank Herbert‘s sci-fi epic. That mythical production included collaborations with Orson Welles, Mick Jagger, and the recently deceased H.R. Giger. The director also recently returned to narrative filmmaking with his abstract autobiography The Dance of Reality, which we reviewed at Cannes. Jodorowsky thinks on a cosmic scale, as evidenced in this one-hour discussion with Hit Fix‘s Drew McWeeny, filled with heady quotes like, “The value of art is [its ability] to heal.”

In conversation, Jodorowsky is animated and emotional, even allowing a fan to come up and hug him. His anecdotes cover different periods of his career, including the process of directing his son in El Topo to a discussion of Scrooge McDuck. Surprisingly (or perhaps quite the opposite), Jodorowsky reveals he is not a fan of Gravity, and proceeds to praise the technical accomplishments of the film but denounce its dependence on stars Clooney and Bullock. Like his films, Jodorowsky’s point-of-view is hard to pin down — he mixes anti-establishment beliefs with a disdain for monetary incentives in filmmaking, but acknowledges the need for both to realize his wild visions.

This conversation extends the enigma behind the cinematic figure, and one can take a look below:

The Dance Of Reality is now in limited release and Jodorowsky’s Dune will be available next week on Blu-ray.

Did you find this conversation informative?