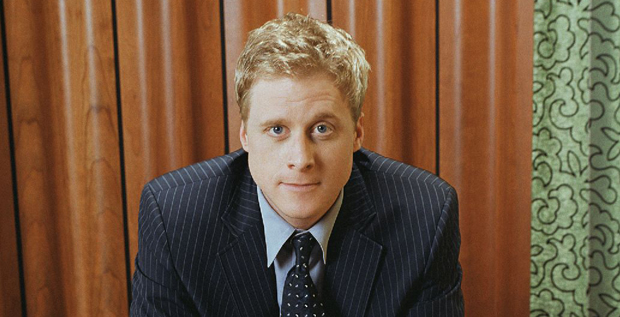 This weekend consummate character actor Alan Tudyk tries his hand as a leading man in the whip-smart horror-comedy Tucker & Dale vs Evil. (Read Jack Giroux’s review here.) Far from a household name, Tudyk has long been building a loyal fan following through his sharp character work in a wide range of projects, from his memorable role as a thuggish Brit in the post-modern romance A Knight’s Tale, to the lovable husband and pilot Wash on the short-lived but cult-adored sci-fi series Firefly, to his scene-stealing turn as a nude accidental tweaker in Frank Oz’s Death at a Funeral. (Apologies if I haven’t cited your favorite Tudyk role. There’s just so many to choose from!)

It’s little wonder then that this stellar character actor has slyly been building a sideline as a voice actor, popping up in the Ice Age movies, Halo video games, and superhero-centered cartoons like Young Justice and Batman: The Brave and The Bold, where he plays Green Arrow and Flash respectively. But now Tudyk has revealed to Empire [via the Playlist] that he’s got a much bigger project on the horizon. While discussing his work as a voice artist, Tudyk admits:

I’ve done Pixar. I don’t know how much I can say on that one except it’s a really cool role that I can’t wait for people to see, but I’m sure it’s at least two years out, maybe a year and a half at best. We’ve been working on it for a while though. It’s great, they really take their time.

With the only info being that it’s a Pixar movie that’s due to come out in the next 1½-2 years, it’s unlikely Tudyk is referring to Pixar’s next venture Brave [teaser here], which makes its way to theaters next summer on June 22. That leaves the upcoming Monsters Inc. prequel, Monsters University, which chronicles Mike and Sully’s college years, The Untitled Pixar Movie About Dinosaurs, which is said to imagine what the world would be like if the dinosaurs hadn’t gone extinct eons ago, and the next effort by Up director Peter Docter, a project that hasn’t even an unofficial title but is said to explore “inside the human mind.” Monsters University will open June 21, 2013, while the latter two are slated to be released on November 27th, 2013 and May 30th, 2014 respectively.

Of these possibilities, it seems most likely that Tudyk has been tapped for Monsters University, as Tudyk’s tremulous timbre seems an excellent fit for the world of frantic monsters…and it’s the closest chronological match. Now I’m a big fan of Pixar, but honestly have had no interest in a prequel to the winsome buddy comedy…until now. Good voice work is often crucial to a successful animated film that even the thought that they’d have Tudyk on board makes me re-assess my lack of enthusiasm. Of course, with nearly two years before this monster movie hits theaters, it may be some time before we get a confirmation on my educated guess. Still, it’s enticing.

Until then, Tudyk fans have Day Watch director Timur Bekmambetov’s Abraham Lincoln: Vampire Hunter to look forward to. The star-studded cast that will gleefully rewrite history with loads of gore includes such luminaries as Benjamin Walker, Dominic Cooper, Jimmi Simpson, Anthony Mackie, Mary Elizabeth Winstead and Rufus Sewell. Tudyk has signed on to play Stephen A. Douglas, the Democratic candidate who ran against Lincoln in the 1860 Presidential election, and in the film is in league with blood-sucking vampires. Tudyk had this to say of playing the controversial politician:

I’m a historical figure so I provide a lot of historical moments, so I seem to show up whenever Abraham Lincoln is making a decision; I work as his foil, you know, the other side of the argument on slavery – which you just don’t get to hear enough of. I’m in cahoots with vampires and Rufus Sewell plays the lead vampire and I haven’t worked with him since A Knight’s Tale so it’s really great working with him. And we’re on the same side, pretty much. Whenever you’re working with vampires it’s like you’ve got an attack dog. And politicians are even less trustworthy so really it’s a bad pairing.

For more insights from Tudyk, follow him on Twitter, where he often opines, unleashing some wickedly funny tweets.

What Pixar picture would you most like to hear Tudyk in? What’s your favorite Tudyk character?