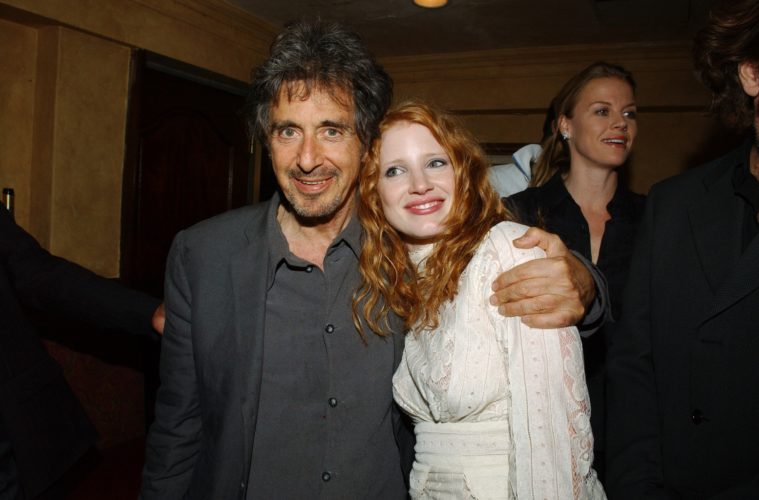 If you ever wanted to get in the psyche of the man who once gave us such iconic performances in The Godfather and Dog Day Afternoon, but is now churning out works like Righteous Kill and Jack & Jill, this new documentary may give you a chance. Premiering at Venice Film Festival and directed by Pacino himself, Wilde Salome chronicles the man’s obsession with Oscar Wilde‘s play, which he starred in and served as a break-out for The Tree of Life‘s Jessica Chastain (pictured above). There is no mention or appearance of here in the trailer though, which can be seen below via Yahoo. Wilde Salome invites audiences into the world of Al Pacino as never before, offering a deeply intimate portrayal of the cinema’s greatest icon, playing his most demanding role: himself and King Herod. Brimming with shockingly candid moments, Wilde Salome ventures with Pacino all over the world, to London, Paris, Dublin, New York, Los Angeles and to his dressing room backstage; nothing is off limits as Al Pacino explores the complexities of the play, the trials and tribulations of Wilde’s life, and in the process offers an unprecedented look at his own. At once touching and deeply funny, Pacino’s journey in Wilde Salome is one of passion, determination and above all, obsession. Tom Stoppard, Gore Vidal, Bono, Tony Khusner, and Oscar Wilde’s grandson Merlin Holland also appear in the film.

Wilde Salome will premiere this week at Veince and is rumored for a 2011 release, but has no distribution yet