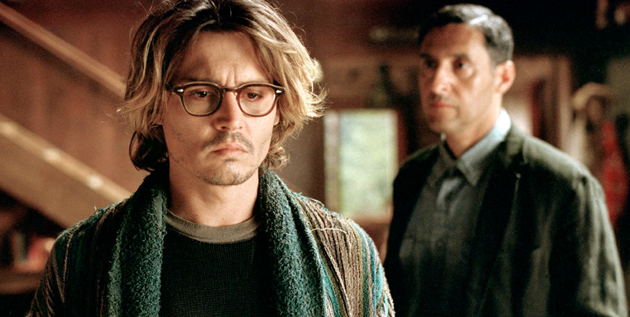 Adapt This: ‘Secret Window’ – The Koepp vs. The King For movie freaks, Halloween naturally makes us think of… Halloween – the classic John Carpenter flick and it’s Rob Zombie-helmed remake. Since neither movie was directly based on previously published material, the subject won’t work for Adapt This… unless we start counting remakes, but that’s a whole other idea.

Anyway, for horror-loving movieheads of my generation, Halloween equals horror flicks and in the deepest chamber of my heart, horror equals Stephen King. We’ve covered Stanley Kubrick‘s The Shining, and while it’s generally considered to be a horror classic, King himself never cared for the flick, and executive produced a slavishly faithful remake years later for ABC. Has King’s attitude toward his film adaptations changed? Judging by King’s positive reaction to Frank Darabont‘s radical change to the ending of The Mist, (based on a great novella), maybe he has. Either way, there are no King comments on the record about Secret Window, one of many underrated adaptations of his lesser-known works. Secret Window was written and directed by David Koepp. Recognize his name? You should – he wrote both Jurassic Park and its sequel The Lost World, Carlito’s Way, Death Becomes Her, Panic Room, War of the Worlds, Indiana Jones and The Kingdom of the Crystal Skull, wrote and directed the underrated Stir of Echoes and Ghost Town, and snagged Johnny Depp to star as bestselling author Mort Rainey in this adaptation of Stephen King’s novella Secret Window, Secret Garden. (Want to read some crazy insider lunacy regarding the politics of professional screenwriting? Seriously? You have nothing better to do? Then dive into the blog of Josh Friendlander, War of the Worlds co-writer – and showrunner/creator of the now-defunct Terminator: The Sarah Connor Chronicles. You won’t regret it, but moving to Hollywood might slide down to the absolute last of your to-do list. His particularly entertaining record of being rewritten by Koepp on Spielberg‘s War of the Worlds can be found here.)

King writes a lot about writers – he has stated in his brilliant On Writing that if the Wise Old Dudes say to Write What You Know, for him that meant writing, teaching and playing the guitar, not necessarily in that order. Secret Window is about Mort Rainey, a blocked writer newly separate from his wife and currently living in their summer house on a lake in Maine (Koepp shifts the locale to upstate New York). As Morty wallows in his pity party, a very odd Southern cracker calling himself John Shooter shows up on Mort’s doorstep and accuses him of stealing his story. This sets off a chain of events which escalates in typically-horrifying fashion: Shooter torches Mort’s main house, kills his pet, murders many people and makes damn sure all the evidence points to Rainey. Why? Because Mort stole his damn story, that’s why. David Koepp’s adaptation is a very good example of how a Stephen King story should be adapted (so if Ron Howard and Akiva Goldsman are serious about their wildly ambitious take on King’s Dark Tower books, I hope they watch and take notes) – Koepp takes a lot of interesting liberties while retaining the spirit of the source material. Some are minor (changing Mort’s murdered pet from a cat named Bump to a dog name Chico, for whatever reason), and some are quite major. The biggest change – beyond the ending, which I’ll get to – is the introduction of a new character Mort visits in New York City named Ken Karsch, a combination private detective and private security guard played by Charles S. Dutton. Karsch exists primarily as a sounding-board, a thoroughly correct method to translate a lot of the prose into dialogue. My second-favorite change (besides the movie’s wonderful, grotesque ending… do I keep teasing the ending? Because I love the movie’s ending.) is the dramatic shift in tone given to Timothy Hutton‘s character, Ted Milner, the shitball insurance salesmen Mort catches his wife Amy (Mario Bello) in bed with during the film’s gripping prologue.

King does his best to balance his reader’s empathy for every character. In the story, Ted Milner is younger than Mort and Amy, but is mild-mannered and far from the aggressive prick the film gives us – Mort “cordially detests” him in the story. The movie version of Ted Milner is a tall, sleazy bastard. He and Mort flat-out hate each other. Koepp expands their mutual, antagonistic back-and-forth into some very funny and affecting scenes, the best of which is their encounter at a gas station, where Mort provokes Ted into taking a swing – which he neatly sidesteps, allowing Ted to break his hand on a car window. The changes aren’t terribly subtle, but while this is a strength in gathering the audience’s sympathy firmly on Mort’s side (before brutally pulling the rug out from under us), the one glaring hazard of Koepp’s film – and it’s a big one – is the bafflingly miscast John Turturro as our villain, John Shooter. Turturro is a fine actor is just about everything (and a terrific director: check out Romance & Cigarettes if you don’t believe me), but his presence is off-putting and his bizarre caricature of a “Miss’ippi” accent is distractingly false. If you know the ending to this story, there is a certain logic behind Koepp’s interpretation… if you don’t, well, SPOILER! John Shooter is a figment of Mort’s imagination.

Actually, John Shooter is an amplification of Mort’s guilt and rage – he’s gone crazy in his summer house overlooking a beautiful country lake, inventing John Shooter, imagining all their run-ins, even going to the trouble of multiple murders and large-scale arson to keep this bizarre fantasy going. Why? In the novella, Mort’s dirty secret is revealed: long ago, he actually did steal someone’s story. He was the second-best writer in a college creative writing class, and King details how Mort found a copy of his more-talented rival’s short story and in a drunken fit of jealousy submitted it for publication and was accepted. Wracked with guilt, shame and the shattered ego of the cuckolded husband, Mort goes crackers and puts himself – and his soon-to-be-ex-wife, whom he appears to love and hate in equal measure – through hell.

The movie skips all that. Instead, there’s a brief mention of a time when one of Mort’s best-sellers was considered for a movie deal, but was too much like a similar project… which hardly seems enough to toss Mort over the edge. I think the plagiarism back-story was present in early drafts of the script, but was excised… possibly because the story was quite complicated enough without a bunch of flashbacks. It certainly motivates the major theme running through the film and novella: theft. Ted’s theft of Mort’s wife, Mort’s supposed theft of Shooter’s story – and on some level, Shooter’s theft of Mort’s sanity and identity. In the end of King’s version of the story, Amy shows up to check on Mort at the lake house just as Shooter takes over and tries to kill her. She is saved by a providential bullet to Mort’s head – an armed insurance agent investigating the fire Mort set in his own house shows up just in time to save the day. Koepp’s film has no such deus ex machina  –  first Amy, then Ted show up to Mort’s house. Shooter merges with Mort, and first Ted, then Amy, are brutally murdered by a shovel-blade to the head.

The ending is a shocking, daring choice by both star and director. It deepens the original story’s dark intentions, culminating in a disturbing epilogue showing us a new Mort Rainey, seemingly a third man, not just the shaggy-haired, depressed Mort whom, thanks largely to Depp’s eccentric, weirdly endearing performance, the audience can’t help but feel sorry for. The “new” Mort has weird, flattened hair, a retainer, an odd jaw-stretching tic, and the entire little town is scared shitless of him. The local police chief makes it clear that they can’t prove Mort did anything… but everyone knows it was him.

The arc of the film is quite a lot like Fight Club – two warring facets of a broken man’s personality are merged into one creature. The Stephen King story pre-dates Fight Club – both the book and the film – by nearly a decade. In a parallel reality, Stephen King shows up on Chuck Pahalniuk‘s doorstep, and says in his inimitable New England accent, “You stole my story.” David Fincher‘s film handles the same themes with a bit more grace, but Koepp’s film plunges into a deeply personal realm that Fincher doesn’t quite touch. It’s perfect viewing on Halloween, since you’ve probably seen Halloween way too many times.

Have you seen Secret Window? Are you a fan of the Stephen King story? Did I steal your story? If so, I’ll be waiting out behind the hardware store.