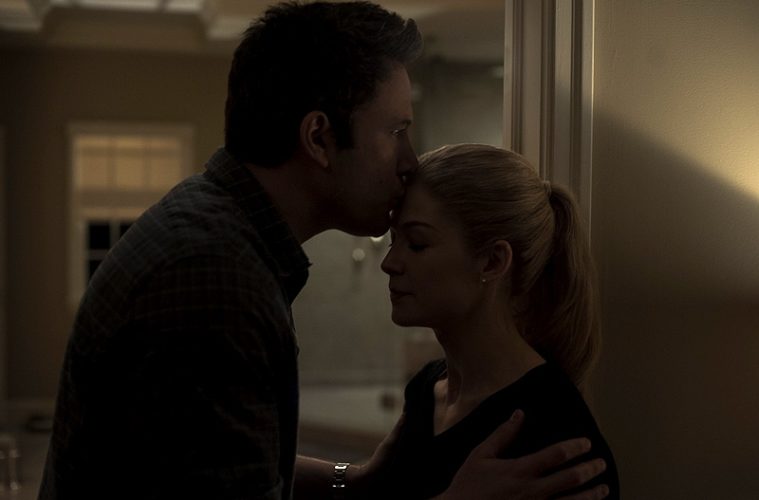 He may be once again adapting a pulpy, best-selling novel, but Gone Girl is quite unlike the rest of David Fincher‘s resume. Yes, his incredibly precise technical approach is still fully on display, engulfing the (often humorous) satire in the sort of icy, indelible world only he can conjure. As I said in my review, “That lurking darkness, by this point as identifiable a trait as any in the Fincher oeuvre, can be found in spades throughout, but Gone Girl is, first and foremost, a black comedy.”

In some ways, it seems like perhaps the most fun he’s had behind the camera, paying homage to a variety of directors. Ahead of the film’s release this weekend, we’ve taken a look at a number of films that help inform the Gillian Flynn adaptation. While they’re worth brushing up on before heading into the theater, each selection would make for a valuable watch if you’re looking for similarly themed offerings. Continue below and let us know if you’d have any to add in the comments.

Although I come to you as a man who’s not yet seen Gone Girl, I do consider myself something of a Brian De Palma expert, and knowing what I know about David Fincher’s latest film allows me to say you’ll probably get a bit more out of it if Dressed to Kill and Body Double are experienced beforehand. That this is tiptoeing around spoilers would both acknowledge the need to preserve some surprise and also tip the cap to De Palma, whose immense formal talent can make the bombastic and stupid utterly sublime — a trait one might apply to Fincher himself. Even if you have no desire to check out his 2014 offering, at least allow another director to give you some slick sleaze. – Nick N.

Not since Stanley Kubrick has a director earned the moniker of “control freak” like David Fincher — a stamp of approval if there ever was one. Both employ numerous takes and push their actors to the point of exhaustion, so Fincher’s found the ideal subject with Ben Affleck‘s aloof, weary character of Nick Dunne. When it comes to the closest point of comparison with Kubrick’s filmography, Eyes Wide Shut unquestionably comes to mind, given its amusingly lurid exploration of a marriage on the rocks. Adding to the collation, Daniel Kasman acutely points out the dreamlike depiction of New York — told in heightened flashbacks — and one may be convinced Tom Cruise‘s wandering William Harford is just around the next corner. – Jordan R.

Fans of Gillian Flynn‘s book will recognize the direct reference to Alfred Hitchcock‘s Vertigo, but similarities to the Master of Suspense’s work don’t end there. One imagines if Rosamund Pike was of a different era she could very well be a Hitchcock blonde. When it comes to another one of his classics, Psycho — a film that, like Gone Girl, was also criticized for its aforementioned “trashy” qualities upon release — we’ll be wary of spoilers, but both find great exuberance in pulling the rug from under their audience. “I know Vertigo really well, and I think Jimmy Stewart in Vertigo is so much crazier than any of villains in Hitchcock [sic],” Fincher recently told Film Comment, sharing his admiration for the Hitchcock drama. “I mean the so-called hero of that film is wandering up to women on the street and saying, would you wear a gray suit and change your hair for me?” – Jordan R.

The girl is gone early in George Sluizer’s Spoorloos (The Vanishing), limiting Johanna Ter Steege’s screentime to a handful of minutes at the opening. The presence of Steege’s Saskia, however, infects and informs the entire film and relentlessly haunts her husband, Rex, who never stops looking for her after her disappearance at a truck stop. Like Fincher’s Gone Girl, Spoorloos is, as Roger Ebert once called it, a thriller about knowledge, and it unspools with the grim promise that the truth may be both complicated and transforming. The primary difference in the two films is one of sensation and texture; Gone Girl plays a confidence game with its audience, while Spoorloos enters a rugged, existential obstacle course with Rex, heading towards a resolution that is dark and uncompromising, yet also metaphysically hopeful. A great pairing with Fincher’s delightfully twisty thriller, Spoorloos is a testament to how suspense can be rung not from an outcome, but from the impact that outcome may have on the psyche. Skip Sluizer’s remake, whose happy ending was both insulting and less triumphant than the one the director originally provided here. – Nathan B.

Have you seen all the above films? What would you recommend to watch with Gone Girl?