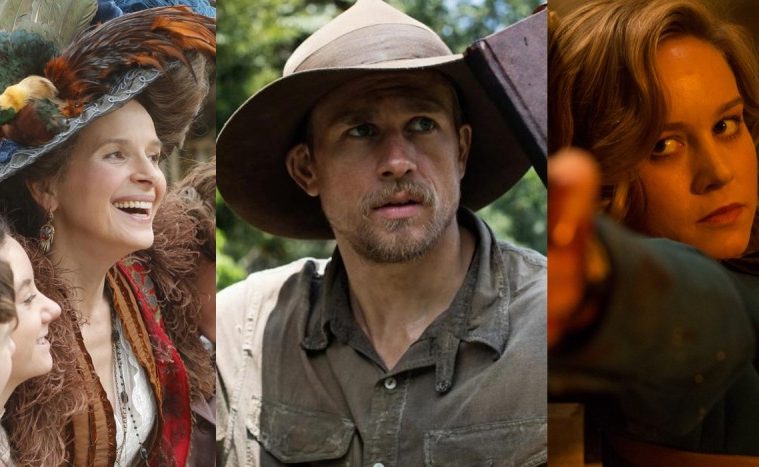 This month brings Amazonian exploration, shoot-’em-ups, boundary-pushing documentaries, kaiju battles, and more. Before the summer genuinely kicks off, and with it the Cannes Film Festival, there’s also a handful of films from last year’s outing. Check out our picks for what to see this month and chime in with what you’re most looking forward to.

Synopsis: A woman lands a dream job at a powerful tech company called the Circle, only to uncover a nefarious agenda that will affect the lives of her friends, family and that of humanity.

Why You Should See It: With Smashed, The Spectacular Now, and The End of the Tour, James Ponsoldt has crafted a number of commendable dramas in his relatively brief career thus far, and his latest will find him stepping up his scope. Starring Emma Watson, Tom Hanks, John Boyega, Karen Gillan, Ellar Coltrane, Patton Oswalt, and Bill Paxton in one his last roles, we hope The Circle isn’t as on-the-nose as its marketing suggests.

14. The Happiest Day in the Life of Olli Mäki (Juho Kuosmanen; April 21)

Synopsis: The true story of Olli Mäki, the famous Finnish boxer who had a shot at the 1962 World Featherweight title.

Why You Should See It: After premiering at Cannes, where it won the Un Certain Regard Prize, Juho Kuosmanen‘s debut feature went on to become Finland’s Oscar entry, and it’ll now arrive this month. As we said in our review, “The Happiest Day In the Life of Olli Mäki is a boxing biopic that has no interest in the sport of boxing. Juho Kuosmanen’s dryly funny, blissfully sweet, and deceptively absorbing work revels in Olli Mäki’s psychological surroundings as he contends with the strangeness of national promotion, the accruing pressures of competing, and a burgeoning romance that’s feeling more permanent than he expected.”

Synopsis: After two decades of media speculation and public fascination, filmmakers explore the macabre legacy of the world’s most famous child-murder case.

Why You Should See It: In 1996, the six-year-old JonBenét Patricia Ramsey was murdered in Boulder, Colorado, and in the 20-plus years since, the perpetrator has yet to be found. It’s a story that has captivated the world; now, a new documentary takes an intriguing angle with exploring the infamous unsolved murder. Looking to take a meta approach in forming a recreation of the surrounding events and those involved, it promises to be a powerful, dark experience.

Synopsis: An earthquake causes a high school to float into the sea, where it slowly sinks like a shipwreck.

Why You Should See It: If you’ve become numb to various boss babies and talking cars that studio animation has to offer, the surrealist debut of Dash Shaw might be more up your alley. Following a group of students (including those voiced by Jason Schwartzman, Lena Dunham, and Reggie Watts), we said in our review, “Writer-director Dash Shaw’s hand-drawn picture is fun and slight without overstaying its welcome. It never runs out of energy and is constantly in a state of innovation and surprise, parodying pop-culture references as vast as Deep Blue Sea and Peanuts.”

Synopsis: A disgraced former cop, fresh off a six-year prison sentence for attempted murder – returns home looking for redemption but winds up trapped in the mess he left behind.

Why You Should See It: After producing and distributing his Sundance-winning drama I Don’t Feel at Home in This World Anymore, Netflix is staying in the Macon Blair business. Their next collaboration isn’t one he directed, but rather wrote with E.L. Katz, who is making his directorial follow-up from the humorously brutal Cheap Thrills. Starring Nikolaj Coster-Waldau, Robert Forster, Gary Cole, Jacki Weaver, Larry Fessenden, Pat Healy, and Blair himself, the SXSW premiere will hit Netflix this month.

Synopsis: Norman Oppenheimer is a small time operator who befriends a young politician at a low point in his life. Three years later, when the politician becomes an influential world leader, Norman’s life dramatically changes for better and worse.

Why You Should See It: Joseph Cedar (Footnote, Beaufort) makes his English-language debut with Norman: The Moderate Rise and Tragic Fall of a New York Fixer, and while it seemed to get lost in the shuffle during a fall-festival debut, it’ll now arrive this month. Led by Richard Gere, it looks to be a uniquely crafted, witty drama with perhaps shades of A Serious Man. There’s also the impressive supporting cast of Charlotte Gainsbourg, Josh Charles, Michael Sheen, Lior Ashkenazi, Dan Stevens, Steve Buscemi and Hank Azaria.

Synopsis: A film about compromises and the implications of the parent’s role.

Why You Should See It: Romanian director Cristian Mungiu, who won the Palme d’Or back in 2007 for 4 Months, 3 Weeks and 2 Days, returned to Cannes last year with Graduation and now it’ll finally get a release. As we said in our review, “Neither blackly comic like his debut, Occident, nor as searingly incisive as his Palme d’Or-winning masterpiece 4 Months, 3 Weeks, and 2 Days, Graduation is a well-acted and efficiently directed but schematic rehash of themes that Mungiu and his fellow new-wavers have expounded time and again over the last decade.”

Synopsis: A dying Sheikh travels across the Moroccan Atlas in a caravan escorted by two rogues.

Why You Should See It: One of the highlights of last year’s Cannes Film Festival, we said in our review, “A “religious western” is how Moroccan-based Spanish director Oliver Laxe describes his second film, Mimosas. It’s a spiritual, ambiguously plotted journey through the Atlas Mountains, and those willing to give in to its mystical embrace and gorgeous visuals should find it a sensual, engrossing watch.”

Synopsis: Two strangers find themselves linked in a bizarre way. When a connection forms, will distance be the only thing to keep them apart?

Why You Should See It: The highest-grossing anime film of all-time is making its U.S. debut this month, and despite the attention its accrued thus far, I’ve largely avoided learning more about the plot beyond its body-switching conceit. So I’ll make this short and say I’m seeking it out, and will be curious if it makes a similar splash here in the states.

Synopsis: Set in Boston in 1978, a meeting in a deserted warehouse between two gangs turns into a shootout and a game of survival.

Why You Should See It: His ambitious Ballard adaptation High-Rise was perhaps even more divisive than past films, but now Ben Wheatley is getting down and dirty with his follow-up. We said in our review, “The gunfire alone risks perforating your eardrums as John Denver blares from a 1978-era van’s eight-track, but I think it’s the surprising wealth of comedy that ultimately gets the blood pumping and synapses triggering. Wheatley and wife/writer Amy Jump’s latest isn’t for everyone — fair warning to Hardcore Henry detractors, Sharlto Copley refuses to quit his shtick — but those willing to break free from a desire for plot complexity will undoubtedly be entertained. This is low-brow Reservoir Dogs, extreme genre action meant to energize you with an insane cast of characters hell-bent on killing each other on principle. Although that briefcase of money is appealing too.”

Synopsis: Inspectors Machin and Malfoy investigate after tourists vanish from beaches on the Channel Coast.

Why You Should See It:  Following his epic drama Li’l Quinquin — which he is currently prepping a sequel to — director Bruno Dumont returned to Cannes last year with Slack Bay, a dark period comedy following an investigation into a series of mysterious disappearances on the beaches of northern France. Led by his Camille Claudel star Juliette Binoche, Fabrice Luchini, and Valeria Bruni Tedeschi, our review from Cannes last year was mixed, but entering the world of Dumont is an experience to cherish.

Synopsis: Two art students roam the streets of Warsaw, exploring a city torn between its past and future.

Why You Should See It:  A beautiful journey as we float through the music-filled lives of youth in Warsaw, I said in my review, “Blurring the line between documentary and fiction like few films before it, Michal Marczak‘s All These Sleepless Nights is a music-filled ode to the ever-shifting bliss and angst of youth set mostly in the wee hours of the day in Warsaw, Poland. Marczak himself, who also plays cinematographer, is wary to delineate the line between narrative and nonfiction, and part of the film’s joy is forgoing one’s grasp on this altering perspective, rather simply getting wrapped up in the immaculately-shot allure of its location.”

Synopsis: A woman discovers that severe catastrophic events are somehow connected to the mental breakdown from which she’s suffering.

Why You Should See It: An impressive feat of large-scale-meets-small-scale storytelling, with a stellar, unexpected performance from Jason Sudeikis, Colossal is Nacho Vigalondo‘s best work since Timecrimes. Led by Anne Hathaway, we said of the film, “The climax prevails in its thematic resonance, moral quandary, and righteous hope. The monster may kill nameless hundreds, but its ability to save one could make everything worthwhile. Great power forever brings great responsibility, but we aren’t all as pure as Peter Parker.”

Synopsis: The story of American poet Emily Dickinson from her early days as a young schoolgirl to her later years as a reclusive, unrecognized artist.

Why You Should See It: Considering how delicate and carefully articulated his films are, it doesn’t seem like we deserve another excellent Terence Davies feature so soon after last summer’s Sunset Song. However, A Quiet Passion delivers, as we said in our review, “That sense of empathy and understanding with his subject is rife throughout this quietly cleansing and exquisitely considered film, which shows the writer from her late teens (portrayed by Emma Bell) through to adulthood (Cynthia Nixon) and old age.”

Synopsis: A true-life drama, centering on British explorer Col. Percival Fawcett, who disappeared while searching for a mysterious city in the Amazon in the 1920s.

Why You Should See It: We’re only a quarter into 2017, but there will surely be no film this year that looks, feels, and moves like The Lost City of Z. As in his previous films, the souls within the characters of James Gray’s drama are laid bare as they venture into the treacherous unknown. Speaking on the experience of seeing it in 35mm, we said in our review, “Let it be stated upfront that this is most likely the best (only?) way to experience what Gray and cinematographer Darius Khondji, reuniting from The Immigrant, have achieved: a film that will often truly and totally appear to have been made in decades past and just discovered today.”