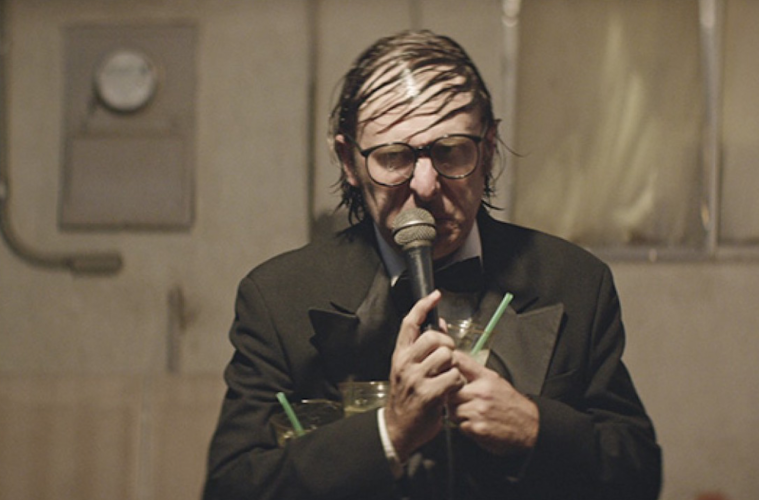 The role of the comedian in film has never been a particularly noble one. Often reduced to mere comedic relief despite the arduous nature of live performing, they receive, as the great Rodney Dangerfield said, “…no respect, no respect.”

Here’s an attempt to change that as we give our respect to those who made us laugh so hard while they themselves were perhaps trying not to cry. The following ten films detail the lives of comedians of various styles and backgrounds. They’re not all traditional, laugh-out-loud comedies, though each one indeed contains incredibly clever and uproarious moments of levity. They capture the desperate fear of failure and the euphoria of success that every performer yearns for and fears with equal vigor.

Ahead of the release of Entertainment, enjoy the list, please recommend your own suggestions in the comments, and don’t forget to tip your waitress!

Woody Allen‘s Annie Hall is arguably the best film ever made about a comedian, though only briefly touches on the minutia of show business. It’s instead an elegy to old times and old relationships. Before we even meet Annie Hall, Alvy Singer informs us that he and Annie have separated. It spirals back through Singer’s life and broken relationship with Hall, this lovable and goofy woman with a predilection for neck ties. It’s all the more remarkable as an iconic romantic comedy due to the fact that Alvy and Annie do not end up together. Containing some of the finest one-liners ever written, Annie Hall is not only a beautiful comedian’s story, but also Allen’s masterpiece.

The Comedy and Entertainment (Rick Alverson) The Comedy is indeed a film about comedy, though not necessarily about comedians. The hero of Rick Alverson’s 2012 picture is the type of guy Adam Sandler or Jack Black has portrayed many times: a playful man-child to whom everything is a joke. But the film containing that character couldn’t be less like their goofy comedies. Tim Heidecker plays Swanson as an obnoxious and juvenile white male living a pseudo-Bohemian hipster life in Williamsburg, Brooklyn. Fitting with the spirit of this nearly plotless story, Swanson will find no meaning in the events of the film, learning nothing about himself — or anything else, for that matter — which may be the most brutal punchline.

Alverson’s follow-up is, yes, already worthy of a mention on a feature such as this. Norm MacDonald once said (and I paraphrase) that the life of a comedian is not far removed from the life of a drifter. You move from town to town, working only an hour a night. The remaining 23 hours are dedicated to killing that free time and trying to stay connected to your family at home, possibly thousands of miles away. Entertainment, the mesmerizing new anti-comedy, captures this point in a stark and ruthless manner. The film finds its protagonist, Gregg Turkington, essentially playing himself, a touring comedian making the rounds across the sun blasted California desert. Comedy fans will know Turkington better as his on-stage character, Neil Hamburger. In the course of the film, Hamburger will curse and clear his throat through bad gig after bad gig, a cutting and often hilarious reminder of the despairs of life alone on the road.

While messy and perhaps over-long at two-and-a-half hours, Judd Apatow‘s Funny People wonderfully captures the emotional essence of its characters. George Simmons (Adam Sandler) is a famous comedian and actor who’s been diagnosed with a rare form of leukemia. Flanked by his new assistant (Seth Rogen), Simmons attempts to win back the woman of his dreams (Leslie Mann) who wised up and dumped him many years ago. We assume this diagnosis will force Simmons to reevaluate his life and change his selfish ways. It does not. Instead, Simmons resists this change, using his condition to manipulate those around him. Perfectly conveying the highs and lows of the business of comedy, Funny People may have its flaws, but they’re weirdly in keeping with its characters.

The King of Comedy (Martin Scorsese)

Despite the cult status of Martin Scorsese‘s film, The King of Comedy‘s protagonist, Rupert Pupkin, is one of the saddest characters ever depicted on film. Pupkin (Robert De Niro) is a wannabe nightclub comic who decides to kidnap talk show host Jerry Langford (Jerry Lewis) in order to land a stand-up set on his show. What’s not so well-remembered is how solitary and lonely Langford seems in the few moments we see of his home life. Pupkin and Langford are two sides of the same coin. Like a clichéd comic-book villain, Langford’s celebrity unknowingly and unintentionally created Pupkin, this diabolical, self-centered monster. Scorsese and De Niro have collaborated on some dangerous characters, but neither reach the level of violent unpredictability of this needy and brazenly psychotic protagonist.

Bob Fosse‘s beautifully non-linear black-and-white ode to the great Lenny Bruce still feels as stylistically contemporary as any film I’ve seen this year. And in detailing the fractured and contradictory nature of Bruce’s onstage / offstage persona, star Dustin Hoffman delivers one of the most electric performances of his career. Fosse’s film and Julian Barry‘s screenplay, itself adapted from the play of the same title, focus on the legend’s best and most controversial onstage material, proving that, despite the years in between Bruce’s life and today, he’s still one of the most important and influential comedians of all time.

Man on the Moon (Milos Forman)

Many biopics feel like Greatest Hits compilations, the storied lives of influential men and women distilled into a punchy Best-of. If Milos Forman‘s Man on the Moon ever evokes this feeling, it’s simply because there are almost too many unbelievable and amazing Andy Kaufman stories. They can only cram so much greatness into one film. Commanding one of the best performances of Jim Carrey‘s career, along with an irreverently charming screenplay by Scott Alexander and Larry Karaszewski, Man on the Moon is a heartfelt tribute to the career of the most uniquely offbeat comic of his generation.

Billy Crystal‘s little-seen directorial debut follows the (fictional) story of Buddy Young Jr., once a moderately successful comedian who’s now sliding into obscurity. In the early years of the act, Buddy’s brother Stan (David Paymer in a stirring performance which garnered him a well deserved Oscar nom) was his partner on stage. A dramatic fork in the road soon alters the brother’s lives forever. As Buddy alone rises to fame, his crass comedic persona drifted off the stage and into his real life. One of the film’s most emotional moments comes when Buddy egotistically claims to be the only reason his brother, now reduced to being Buddy’s manager, even has a career. Stan’s reply perfectly summarizes Buddy’s problem and the problem of many other comedians of that generation: “Yeah, but you could have been nicer.” After she’s harshly dumped by her boyfriend, Donna (Jenny Slate), an unemployed comedian, commences a drunken one-night stand which results in an unplanned pregnancy. For poor Donna, the timing could not be any worse. She’s is not a comedian in the same sense that Adam Sandler’s character in Funny People is a comedian: she’s an open mic comic, a label which makes her plight all the more sympathetic. Acutely observant and achingly funny, the film also contains memorable, albeit small performances from David Cross and Richard Kind. Obvious Child is an emotionally truthful indie gem that refreshingly demonstrates there is indeed life after life.

Sleepwalk With Me (Mike Birbiglia) Mike Birbiglia‘s Sleepwalk with Me is perhaps the quietest, most contained film on this list. It’s the true story of Birbiglia’s journey from being an open-mic newbie to a touring, professional comedian, framed against the gradual collapse of his relationship with his girlfriend, Abby. Stylistically simple yet deeply nuanced, the film achieves a tone reminiscent of Woody Allen or Albert Brooks. Birbiglia finds emotion in utterly unexpected places, such as the first paycheck he earns from hosting a not-so-well-attended lip sync competition. Sleepwalk with Me touchingly evokes joy and also sorrow in small personal moments while still generating very big, very intelligent laughs.

What are your favorite films featuring comedians?