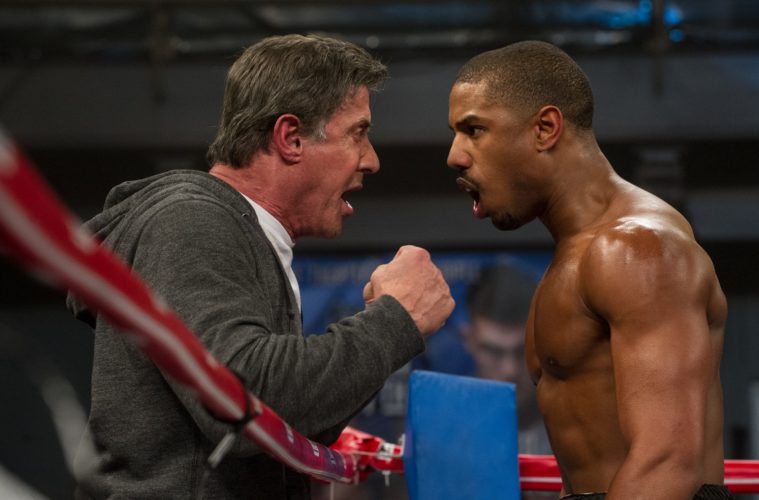 The life of a professional boxer can be desperate and toilsome. Unless you’re a marquee prizefighter, there’s little money to be made, leaving many fighters stricken by poverty. Yet, few professions are so straightforward. Almost disturbing in its simplicity, you punch your opponent until they fall down, whilst they try to do the same to you.

In cinema, the boxer is an ever-present figure, often solitary and driven to succeed by demons from the past. Creed, Ryan Coogler‘s new addition to the Rocky series is out this week in a wide release, and garnering some very positive reviews (including our own). There’s no better time to brush up on your boxing movies, as it’s an enthralling little sub-genre, ripe for explosive violence and drama.

We compiled ten of the best boxing movies below, so check them out, and let us know your favorites.

Michael Mann‘s epic portrait of Muhammad Ali marvelously depicts the champ and the cultural upheaval surrounding his storied and controversial career. Like many biopics, the film merely hits the key points on his resume, including his bouts with Sonny Liston, Smokin’ Joe Frazier and of course, George Foreman. Yet, we see the true essence of Ali encapsulated in Will Smith‘s finest performance, this confident and brash fighter with the youthful spirit of a poet. Mann’s sweeping and layered portrayal boasts a star-studded cast, including Mario Van Peeples, Jamie Foxx and Jon Voight‘s spot-on Howard Cosell, which nails every detail right down to the pelt-like hairpiece. Ali is a thoughtful and aesthetically flawless picture, which succeeds in conveying the harrowing emotions the People’s Champion felt inside and outside of the ring.

Jim Sheridan‘s third collaboration with Daniel Day-Lewis brings boxer Danny Flynn home from prison, after serving 14 years for his crimes as an IRA volunteer. Hoping to go straight and return to boxing and to his first love (Emily Watson), Flynn finds violent conflict in the form of Harry, a ruthless and hateful IRA lieutenant with whom he worked in the past. Emotionally stirring and disturbingly intense, the film builds to several enraging moments in which our villain commits such terribly loathsome acts, the audience (and the surrounding characters) nearly scream for his blood. The scenes in the ring are photographed with careful precision and athletic detail, continually dishing out jabs and blows which land with a gut-wrenching authenticity. A far cry from the flashier, Oscar-winning performances Day-Lewis is known for, but equally powerful for its reserved nuance.

Rocky Balboa may be a blue collar protagonist, but there is nobody on this list with a bluer collar than Tully (Stacy Keach) in John Huston‘s Fat City. After washing out of the sport years earlier, Tully hopes to escape his skid row life by returning to the ring. Ernie, a young boxer (Jeff Bridges) admires Tully, having seen him fight during his heyday. After Ernie’s admission, Tully asks: “Did I win?” Ernie replies: “No.” Tully simply nods, unsurprised. Fat City is a sobering and realistic portrayal of the toils of pugilism: the mental, the physical and the emotional. After Ernie loses his first match, his manager barks at him to remove his boxing shorts, as the next fighter now needs them. Ernie peels off and hands over the shorts, stained with sweat and blood. The next fighter reluctantly takes them and pulls them on. In an interview, Huston described the archetypal boxer’s struggle in a compassionate and poetic fashion: “Unlike the gambler who throws his money onto the table, the fighter throws himself in.”

Sadly and unfairly, Karyn Kusama‘s indie debut never achieved the box office of so many lesser low-budget films, but Girlfight is an undisputed winner of the genre. Diana Guzman (Michelle Rodriguez) is an angry, frustrated high school girl, whom we meet beating the crap out of a snarky fellow student. After she’s threatened with expulsion from school, Diane finds herself at the local gym, ringed with young masculine boxers in training. This unfamiliar new world quickly captivates her and soon, Diane is working along side unapproving males, including her father (Paul Calderon, in a fantastic turn) with whom she’ll come to blows. Though Diane may be the only female fighter on the list, she could undoubtedly hold her own with any opponent.

Stanley Kubrick made Killer’s Kiss on a meager budget with little-known actors and whatever available New York City locations he could scrounge. A staling, pompadoured boxer falls for a lovely dancer and intends to slip away with her, only to run afoul of her sleazy, dangerous employer. On a narrative level, there’s little to praise. It’s B-movie, film-noir lite at best, but even at the age of 27, Kubrick’s artistry elevates the picture well beyond its pot-boiler origins. The fight sequence achieves an immaculate cinéma vérité period quality, closer to World War II footage than mere sports newsreel.The true power of Killer’s Kiss lies in the photography, the lighting and craftsman-like attention to composition. It’s a fascinating early glimpse of an artist whose skill and talents had not yet fully crystalized, which makes the film even more watchable for its blemishes and scars.

John Ford‘s whimsical The Quiet Man is less about boxing than it is about the life-altering consequences of the sport. A former boxer (John Wayne) moves to his family’s ancestral home in Ireland, only to find himself at odds with a local blowhard (Victor McLaglen) which might prompt a reluctant return to fighting. Tragically, the boxer accidentally killed an opponent in the ring years earlier, an act which caused his change of heart and exit from the sport. Even so, The Quiet Man is the most outwardly humorous film on the list, thanks to the lively and charming supporting cast which includes Barry Fitzgerald, Ward Bond and the stunning Maureen O’Hara. McLaglen himself was a real boxer for a time in Canada, fighting heavyweight legends such as Jack Johnson. Indeed, Ford wisely surrounds Wayne with a treasure trove of fantastic character actors, all dropping hysterical one-liners that would make Buck Henry proud.

Martin Scorsese and Robert De Niro have created so many unforgettable characters, but the actor’s most monumental transformation is undoubtedly the character of Jake LaMotta. Scorsese’s most mature work, the film is a breathtaking black and white portrait of LaMotta’s career and deteriorating personal life as he succumbs to the difficulties of male insecurity. The melancholy tone of the material can cloud the film’s humor in memory. Like Goodfellas, Raging Bull is a very funny movie, as seen in the interaction between LaMotta and his brother, played by Joe Pesci. These two knuckleheads arguing as they vainly attempt to fix a TV set, or clumsily spar in the ring, becomes funny in a rather life-like manner. There may be superior glimpses of the sport on this list, but there is no finer portrayal of its leading character: a wounded and sad man, hellbent on hurting himself as much as he does his opponent.

Requiem for a Heavyweight (Ralph Nelson)

Notable for the brief cameo of Muhammad Ali, then known as Cassius Clay, and for the remarkable tracking POV shots that bookend the film, Requiem for a Heavyweight is a minor classic of the boxing genre. Written by Rod Sterling, who regards the script as the best of his filmography, the plot examines the dirty consequences of a life spent in the ring. Our hero, Mountain Rivera (Anthony Quinn) is a punch-drunk has-been prizefighter whom we meet after the final match of his 17 year career. Rivera is beaten, bloody and raw, and warned by the doctor that he won’t survive another match. His sleazy manager (Jackie Gleason, coming right off The Hustler) owes money to a dangerous gangster and will do anything, including humiliating Rivera by forcing him into the world of staged wrestling matches, to pay the debt. Though it may be melodrama, it is never cheap. The cast, which also includes Mickey Rooney, elevates this television movie to memorable and moving cinematic heights.

It’s so easy to forget the subtlety, sweetness and humor of John G. Avildsen‘s Rocky, following the numerous and sometimes laughable sequels. (Remember Paulie’s robot?) The film’s climactic bout between Philadelphia’s favorite son and the champ Apollo Creed (clearly based on Ali) is a balletic ode to the underdog, framing the fight’s escalation gradually, imbuing Creed’s first drop to the canvas with a rousing elation. Even after countless viewings, I still get a jolt when Rocky Balboa lands that first fall. The power of the film (and its titular character) endure because of the story’s simplicity: a likable loser who gets a one in a million shot at the American dream. The sport of boxing is a wonderful metaphor, as it is a true athletic equalizer of men. No matter who you are and no matter where you came from, if you can fight, you can fight.

When We Were Kings (Leon Gast and Taylor Hackford)

Perhaps the finest documentary ever made about boxing, Leon Gast and Taylor Hackford‘s When We Were Kings is a supremely entertaining and riveting look at the legendary Zaire showdown between Muhammad Ali and George Foreman, better known as the Rumble in the Jungle. The incredible footage encapsulates every behind-the-scenes step as dozens of American fight promoters, journalists, trainers and musicians (B.B. King and James Brown appear) transplanted themselves to Kinshasa to await the historic clash. The composed Foreman and the charismatic Ali engaged in a lively back and forth in the press, playful sparring which provide a perfect entree to the main event. The fight itself maintains an ageless and exhilarating edge of your seat quality, aided in no small part by Norman Mailer and George Plimpton’s eye witness testimony. Even casual fight fans will watch the film’s last half hour on their feet, shouting and covering their eyes in suspense. When We Were Kings lives up to the critical hype, making a decidedly rare gem.