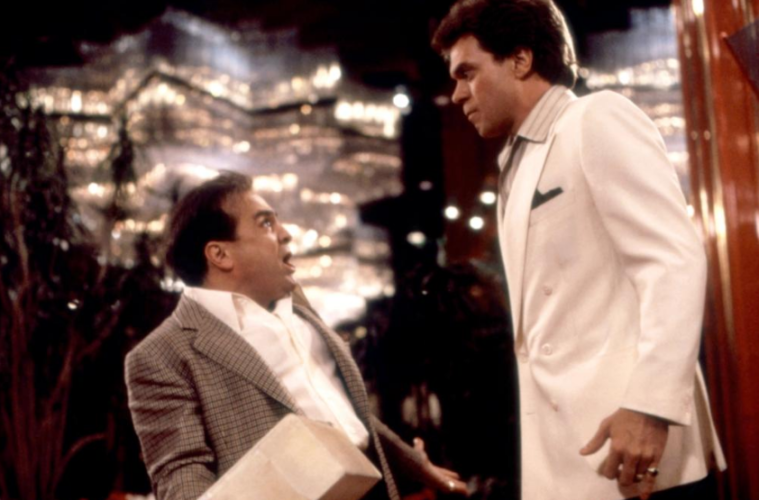 In spats, it plays like De Palma trying out slapstick. Select moments — a close-up shot that pulls out to reveal Harry being drowned inside of a fish tank or Moe testing out a bulletproof suit jacket for his boss — highlight the fascinating hybrid of De Palma’s visual style with broad, studio comedy. If only it worked a bit more frequently throughout the film’s bloated 100-minute runtime. One can only ponder what additional mileage the director may have achieved from DeVito’s deliciously terrible hairpiece, but, alas, it was not to be.

It often seems that both the filmmaker and his lead actors are only trying to be funny intermittently. While structured and cast like a bumbling road-trip comedy, it is surprising how often all involved play it steady and soft, treating the fracturing friendship of the guy from Saturday Night Live and the guy from Taxi as a semi-tragedy to be overcome. And if its over-the-top music cues and sadness are meant to be acts of self-awareness engineered to elicit laughter, they miss the mark all too often.

To some degree, the manic comedy of De Palma’s earlier works (Hi, Mom!, The Wedding Party) never really manifested itself in his bigger-budget output. If one considers Wise Guys and The Bonfire of the Vanities the two closest examples of De Palma doing comedy at a studio level, the results speak for themselves. That said, the sheer scope and ambition of Vanities elevates that film above the middling atmosphere in which this film lives.

Now, one should not discount time as a factor. In the mid-80s, a buddy comedy about two losers assigned to kill each other almost certainly was a fresher, more bankable concept than it is today. Upon release, Wise Guys wasn’t wholly dismissed, receiving positive notices from the likes of the New York Times and Roger Ebert, and, for whatever it’s worth, screenwriter George Gallo would follow this picture with Midnight Run, a near-perfect on-the-run buddy comedy that’s only shined brighter with time.

It’s also important to note that Wise Guys opened (along with the cult hit Body Double) between two of De Palma’s most commercially successful movies: Scarface and The Untouchables. Both are playful and playfully violent; Wise Guys is never much of either. Punches are being pulled, safe decisions being made. Clever Mafioso subversions (Moe and Harry sometimes have to turn their bosses’ cars on, just in case it’s wired to explode), an easy chemistry between the leads and an impressive supporting cast, including Patti LuPone and a scene-chewing Harvey Keitel, never elevate an aggressively straightforward narrative.

There may be an explanation for the lack of creativity and verve here. Speaking with Fandango a few years back, De Palma briefly touched on the difficulties of making the film: “…take a movie like Wise Guys. It’s not one of my favorites because nobody at the studio ever liked it. It was given a go by one administration and they left, and then another administration came in. It was a bastard child that no one wanted anything to do with, so that was not a pleasant experience. But I liked working with Danny DeVito so much that we managed to soldier through it.” He doubled down on the take in an interview with Business Insider earlier this year: “Now a movie I wish I hadn’t done was Wise Guys… I should have just taken my money and walked instead of dealing with a studio that didn’t want to make the movie.”

Revisiting it thirty years later, there’s no denying what it could have been while also acknowledging what a strange time piece it has become: Piscopo as leading man, playing off of a white-hot DeVito, in the age after 48 Hours but before Lethal Weapon.

In many ways, Wise Guys is the “bastard child” of De Palma’s career — a lazy piece of work from a director who is anything but. Even with his trademark split-diopter popping up a couple of times — most notably during the finale in the casino — the filmmaker feels markedly absent from the proceedings. Auteurs, by nature, make their unique mark on everything they touch. De Palma’s mark does not get any lighter than this.