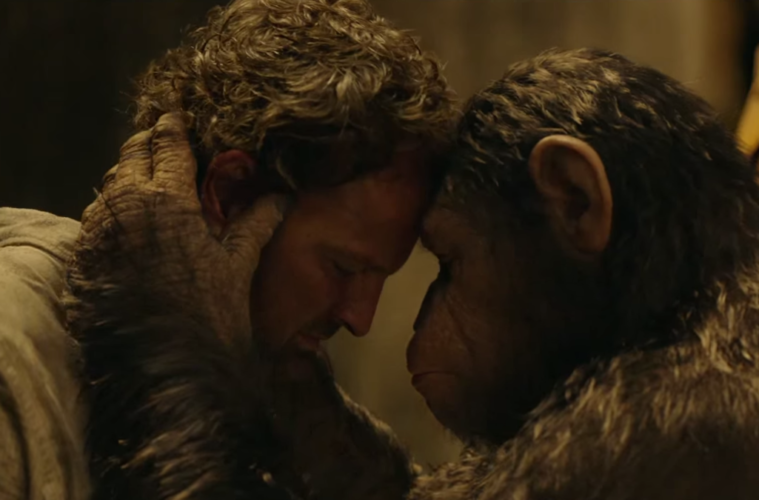 Why the Original Ending of ‘Dawn of the Planet of the Apes’ Was Cut From the Film, But Not the Marketing Note: The following article includes a discussion of the ending for Dawn of the Planet of the Apes.

Debuting to major acclaim (including our own) and better-than-expected box-office, Matt Reeves‘ Dawn of the Planet of the Apes is a well-crafted, refreshingly levelheaded blockbuster that defies the standard prequel trappings. Centered primarily around Caesar (Andy Serkis) and the inner-workings of his newly formed community (particularly their clash with the remaining nearby humans), I mostly stayed away from 20th Century Fox’s marketing as to not spoil the experience. However, upon viewing the final trailer after the film, I was taken aback by just how much it gives away, including what was going to be the original ending.

One shouldn’t be surprised in today’s age when it comes to studios’ deceiving marketing. Paramount removed an entire legion of characters from Darren Aronofsky‘s Noah in its ad campaign, while Warner Bros. effectively changed a linchpin Godzilla shot from the trailers to conceal another monster and bring our title character face-to-face with the audience. When it comes to Dawn of the Planet of the Apes, though, Fox was bold (or nervous) enough to include a shot excised from the finale.

In the third act, as Koba’s new army of followers reign over the remaining humans, Gary Oldman‘s Dreyfus, tucked underground with his two colleagues, reveals to Malcolm (Jason Clarke) that they’ve finally made contact with a military base up north. Before Dreyfus kills himself and murders his companions (except for a preposterously lucky Malcolm), he declares that the military is approaching to presumably wipe out the remaining chimps and save humanity. Instead of seeing this suggested conclusion, following Caesar’s act of violence, the apes find a brief moment of peace before saying goodbye to Malcolm and Reeves’ camera (directed on Skype, no less) pushes in on the eyes of our lead for a fulfilling book-end. A mere few weeks ago, though, that wasn’t all the ending had to offer.

For those curious what the original conclusion had in store, look no further than the final trailer below (1:51 in):

The above footage shows the aforementioned military battleship approaching San Francisco amidst footage of all-out war. Considering it’s a film that features perhaps two major action sequences (both heavily detailed in the trailer and measly by Hollywood’s summer standards), we can see why Fox chose to include this clip in the marketing, despite how deceiving it is. After all, a studio seemingly can’t have a summer action tentpole without major military presence hinting at total destruction. (I suppose a planet in which the majority of its reigning species has been wiped out isn’t enough.) This brief clip also pairs nicely with their main poster, which misrepresents Caesar’s motives and features a nonexistent setpiece.

When it comes to what nearly made the cut, screenwriter Mark Bomback recently stopped by Jeff Goldsmith‘s podcast The Q&A to discuss the originally planned finale, saying they knew early on they wanted Caesar’s moral dilemma with Koba to be the focus, but they “played a lot with what happens next.” He goes on to say, there was “a version where you see the arrival of other humans. We had the apes retreating to Muir Woods afterwards, going across the bridge and in the far distance you see a battleship starting to arrive,” referring to the shot used in the marketing.

“There was always a queasiness when we did it,” Bomback adds. “For one thing, the people on the battleship we don’t know. It’s weird to end your movie with strangers and also we knew we were locking into a scenario for the next one. Why do we want to lock in? I’m guessing when Dreyfus said there was a military base up north that’s coming, that will play a role in what we do next. I don’t know, does it need to?” He concludes, “On a purely character level, it’s Caesar’s story. Why are we leaving Caesar at the end of his story? We want to end on his emotional place, not on a battleship.”

In a Marvel-dominant world full of multiple endings, mid-credits teases, and post-credits lead-ups for the next franchise installments, it’s practically a miracle they were able to pull off this book-ended finale, bringing this contained story to a satisfying close. “What was most important was to leave you in that emotional space with Caesar, which is the ending of the movie that you’ve seen, and know that the future is coming, but not already be at that future,” Reeves tells Collider. “Because the moment is really about the moment that has passed. This could have been the planet of the humans and the apes, and that parting between Caesar and Malcolm is a very emotional moment to me and I didn’t want something that distracted and became something else.”

We certainly side with Reeves’ decision, but for those that do want to see that “something else,” Fox has come to a respectable middle ground, preparing to release an extended cut on Blu-ray with a collection of deleted scenes. Fox may have added some misleading big-budget spectacle to their ad campaign, but we should be thankful they didn’t force Reeves’ hand in overextending his story to tease audiences what comes next, considering the next sequel’s date is already locked in for the summer of 2016. With the goodwill Reeves has instilled thanks to Dawn, simply ignoring the marketing for its follow-up is bound to be advantageous.

Do you prefer the current ending in the film? Did you find Dawn‘s marketing deceiving?