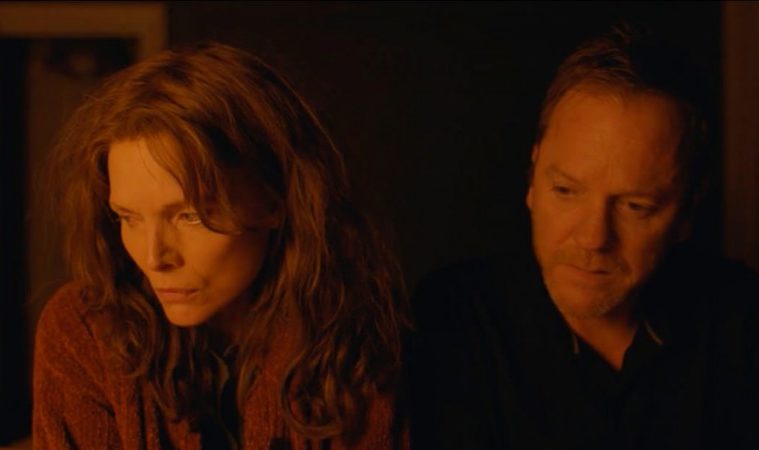 Director Andrew Dosunmu made a splash at Sundance in 2013 with his film Mother of George, a Brooklyn-set story concerning a Nigerian couple trying to have a child. Four years later, the man is still in New York City with Where Is Kyra?, this time exploring how a metropolis can swallow up its older members whole, without a second thought. We spoke with Dosunmu about where this idea came from, how he collaborates with his great cinematographer Bradford Young and if his top-notch lead actors were aware of how often the camera was not focused on them at all.

The Film Stage: How did the project come together?

Andrew Dosunmu: After I finished my last film Mother of George, I wanted to do something different. And I live in the city (New York City), and people are out there. And for me, it’s like, there’s this guy on the street and I start talking to this guy and this guy went to Berkeley and I was like, ‘Slim are you for real?’ And we had a conversation. And then, you start to attribute it to the country and the situation, the society, the state of the country at the moment, what happens when you’re unemployed at a certain age? You’ve worked in a factory or at a company for twenty-five years and you’re fifty [years old], so you’re still pretty young. How do you find a job?

I mean, I remember a friend of mine saying something to me which I’ll never forget. She said, ‘Oh, I’m looking for a secretary, and this woman came in and she’s amazing.’ And she’s like, ‘[She can type] one-hundred words per hour’ or whatever it is, ‘but I’m not going to employ her’ and I said ‘why?’ and she said, ‘because I feel like I’m bossing my mother around.’ And I’m thinking, ‘this is what people like this are facing.’ She’s good for the job but [Kyra, in the movie] can’t even get a job at the pizza parlor because she’s not sexy enough…so really it’s that question of how, in this society, the decline of whatever we are going through…that’s the genesis really. So I spoke to my writer [Darci Picoult]…

And you two had worked together on Mother of George…

Yes, and we started piecing things together, and that was it.

It’s definitely such a specific part of the metropolitan experience…

Especially New York metropolitan, that metropolis, in my opinion…

Well, and it’s an interesting look at the City of New York. One of the main reasons to see this movie, aside from Michelle Pfeiffer and Kiefer Sutherland who are great in it, is Bradford Young. The lensing that you guys collaborate on is so unbelievable. At this festival right now I sometimes feel that half of the movies are shot and set in New York City, so you can feel oversaturated in New York City stories. The way you two capture the city, in terms of the shadows and a tone that feels very lonely and very detached, feels fresh. When you’re filming and planning to film, what’s that discussion?

And you come from the photography world…

I come from photography and he was a huge fan of my work and he knew my work… you know it’s almost like being in a jazz band. We know what influences us, and he just blows and I just blow. So that helps. We’ve backpacked through the streets Sudan together, you know what I’m saying? So, you know, we know each other.

There’s an early shot where Kyra is in the apartment bedroom and her mother is in the bathroom and the camera is placed in such a way that the frame looks split, and then a door opens up and it becomes a completely new shot without the frame moving at all. I’m still thinking about that shot and how you guys did that.

So that’s a conversation. Palettes, we talk about palettes and what we’re going to do. Like, for example, for this film I remember all I said to Brad was, ‘[artist] Cindy Sherman.’ That’s it. And we went from there.

Bringing it back to the performances. It’s obviously a very visual movie, but you have these two actors [Pfeiffer and Sutherland] who – although Sutherland has been doing television work of course – haven’t been around in films too much recently. And they’re a great duo I would’ve never thought of together. But it works in the film, there’s a hardness to them. How do you get there with the two of them?

Well, it was interesting the whole idea of Michelle coming on. I was intrigued because it was like a challenge for me. This is a woman, an amazing actress. We all see Michelle as a kind of actress, fragile. It always seemed like Michelle was a certain kind of actress, fragile, all those things we associate with her. And actually, when I first met her I met her on a day like this [overcast and cold] in New York. And I knew that if I wanted to work with her this is what I wanted to do with her. I knew she had that capability. I was intrigued by that. There were places I could have gone. I could have gone the Tilda Swinton route. But you expect them to do this film. To me, the reason for doing this film was to add to the conversation, about our society. And what better way than to use Michelle, which is an American household face, because then it resonates with the audience, with the people. This can happen to anyone, and who is ‘anyone?’

With Kiefer, I love the way he’s introduced where you don’t see his face for a long while and when you finally see him he’s so shrouded in darkness you barely know it’s him. When you’re making a movie like this, with these two bigger names, the way you’re filming there’s almost a lack of camera coverage. Are they aware of where you’re putting them in the frame? Where the camera is focusing? Is that a conversation you have to have?

They are aware of it. They’re scared of it. It was something that…I felt the energy of the set that me and my collaborators – my DP and my writer – didn’t need that kind of fame. Of course they are aware of it. We’re not cutting from their face to another face to their face to [a wide shot]. And to me there’s something beautiful about that. Because this is the moment where you come with your A-game. And that’s it. And Michelle, flawless. Came in, Bang! Nailed it. So it was beautiful to work with her. I lent as a director, you know? I’ve always worked with directors and actors and someone of that caliber, in contrary of people I’ve known that have worked with bigger actors, Michelle was very open. It was my script and I knew what I wanted. And she was on it. She came, nailed it. And because of budget, there were a lot of constraints. It’s New York there’s no one-block trailer, all that stuff. So it’s like just trying to get her in and get her out.  Asking ‘what’s the best way I can cover this? And stay true to me?’

Because I come for photography as well, the whole idea of installation and cinema and how they converge at the same time.

The sound of the subway in this movie is terrifying. It’s a very New York thing. During the transitional moments [in which Kyra walks around the city], you have a very industrial score that stands apart. Where does that come from?

For me, it started with the cane.

It started with the cane?

The repetition of the cane and how do you enhance that? Because it actually is the repetition of the cane, enhanced. Here’s this woman and here’s this cane…it’s that combination of the train and the New York sirens and everything. Not actually using that, but making people feel the same way. Like in New York, you’re so isolated and in your own world. You’re in the subway, you’re in taxis, you’re in the ambulance. We’ve seen that in movies. I wanted to create the same impact, of that isolation of that fear.  Of this woman that is impersonating someone else and she’s terrified. And, for me, again this film is a conversation about our relationship to the elderly in New York City. Maybe it’s because I’m aware and my mom’s elderly and I think about those things. Like, we don’t want to think about…we want it to be quick. We want to get on the bus. We don’t have the patience for our elderly…that’s why she can go to the bank [impersonating her mother], because the teller is thinking ‘get this old lady out,’ so he’s even not looking at her.

Where Is Kyra? premiered at the Sundance Film Festival and opens on April 6, 2018.