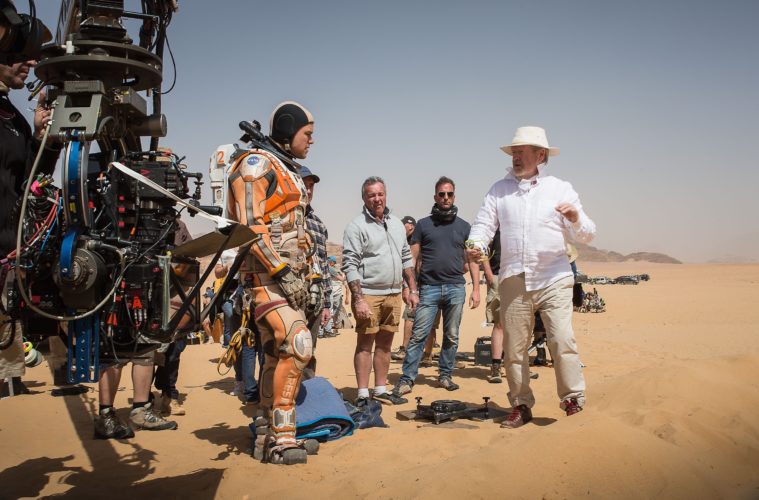 With 23 films over the last 38 years, Ridley Scott has barely had time to slow down and he’s already planning to shoot his Prometheus sequel, Alien: Paradise Lost, early next year. As for his latest, The Martian, it’s shaping up to be his biggest success yet with a $100 million-plus opening weekend worldwide and widespread acclaim from audiences and critics. For those that are looking to go behind the scenes of the the making of the film, as well as his entire career, we’re featuring a batch of extensive conversations he’s taken part in.

“Matt [Damon] called me ‘Two Take Charlie,'” Scott told EW with a laugh, revealing he shot the film in a brisk 72 days. “The key is to know what you’re doing. If you do 90 takes it means you don’t really know what you want. Also, the key in doing my job is to have good taste in casting and cast well. When you cast well, the actors are going to help you on the day. So you cast people who will become partners and that’s how you move so fast. They trust me. I trust them. Most great actors will say: I’m going to get it in two. So if we go on to do 19 takes I don’t know what I’m doing anymore. I learned that way back when. They’ve come in totally prepared and you do not want a long dissertation about their cat dying, and their mother isn’t well and the house just burned down. They’ll look at you and be like, “What are you doing? You’re f—ng with my head!”

In the talks he discusses his decade in the commercials world before diving into his debut, The Duelists, at the age of 40. He opens up about jumping right into Alien, in which he was the fifth choice to direct behind Robert Altman — who looked at it and said, “Wow, this is not for me” — and only did the project because of his fascination with sci-fi after Star Wars. Also discussed was his 18-month period of pondering whether or not he would take on Blade Runner and much, much more.. As for The Martian, he said there will be another version on the Blu-ray that’s around 15 or 20 minutes longer, saying, “It’s not fat. It’s real scenes. I hate it when people shove in a couple of long shots — it’s boring. This is real scenes.”

Check out all the talks below and listen to our in-depth discussion here.