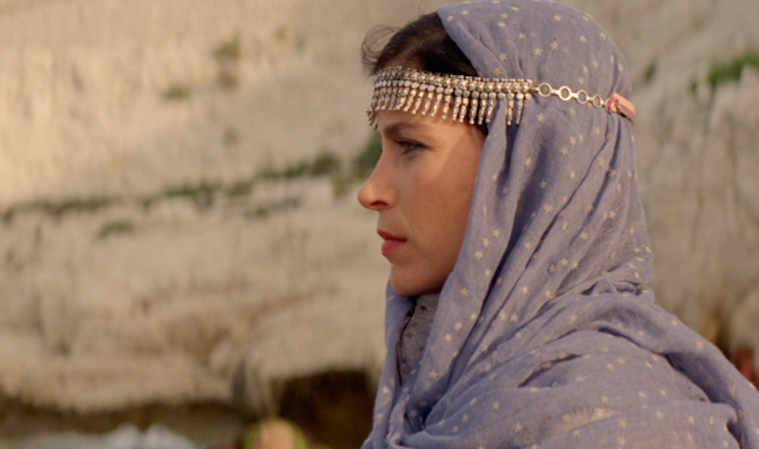 Spectre is the longest Bond ever and The Hateful Eight 70mm event is over three hours, but the most epic cinematic event of the fall will be experiencing Miguel Gomes‘ Tabu follow-up Arabian Nights. Clocking in at 6 hours and 21 minutes and spread across three separate films, technically, it captures fictional stories “from the miserable reality he is immersed in,” some quite hilarious, others not so much.

Set to debut in December at NYC’s Film Society of Lincoln Center  — more dates to come here, thanks to Kino Lorber — Gomes stopped by there during the New York Film Festival to give, fittingly, three separate talks. Over the two hours or so, he touches on a variety aspects of the year-long shoot, notably how he came across the stories to pull in and the on-the-fly adaptation process. If you’ve managed to see the films on the festival circuit, it’s a must-watch and if you plan to seek them out this fall, be sure to bookmark.

One of our favorite films at Cannes, we said in our review, “Miguel Gomes’ Our Beloved Month of August and its ecstatically received follow-up Tabu showcased the director’s love of storytelling as a means of contemplating reality. In these films, by whimsically intermingling and reinventing cinematic traditions as well as throwing in an abundance of personal innovations, Gomes wove tales that reflected on defining aspects of Portuguese culture with irresistible idiosyncrasy. The six-hour triptych Arabian Nights continues in the same vein, though with far greater ambition. Fascinating even in its misfires, this sprawling and fantastical document of the country’s plight in the wake of the global financial crisis confirms Gomes as one of the most exhilaratingly inventive filmmakers working today.”

Check out the conversations below as well as the release details at Film Society of Lincoln Center.

An up-to-the minute rethinking of what it means to make a political film today, Miguel Gomes’s shape-shifting paean to the art of storytelling strives for what its opening titles call “a fictional form from facts.” Working for a full year with a team of journalists who sent dispatches from all over the country during Portugal’s recent plunge into austerity, Gomes (Tabu, NYFF50) turns actual events into the stuff of fable, and channels it all through the mellifluous voice of Scheherazade (Crista Alfaiate), the mythic queen of the classic folktale. Volume 1 alone tries on more narrative devices than most filmmakers attempt in a lifetime, mingling documentary material about unemployment and local elections with visions of exploding whales and talking cockerels. It is hard to imagine a more generous or radical approach to these troubled times, one that honors its fantasy life as fully as its hard realities. An NYFF53 selection. A Kino Lorber release.

In keeping with its subtitle, the middle section of Miguel Gomes’s monumental yet light-footed magnum opus shifts into a more subdued and melancholic register. But within each of these three tales, framed as the wild imaginings of the Arabian queen Scheherazade and adapted from recent real-life events in Portugal, there are surprises and digressions aplenty. In the first, a deadpan neo-Western of sorts, an escaped murderer becomes a local hero for dodging the authorities. The second deals with the theft of 13 cows, as told through a Brechtian open-air courtroom drama in which the testimonies become increasingly absurd. Finally, a Maltese poodle shuttles between various owners in a tear-jerking collective portrait of a tower block’s morose residents. Attesting to the power of fiction to generate its own reality, the film treats its fantasy dimension as a license for directness, a path to a more meaningful truth. An NYFF53 selection. A Kino Lorber release.

Miguel Gomes’s sui generis epic concludes with arguably its most eccentric—and most enthralling—installment. Scheherazade escapes the king for an interlude of freedom in Old Baghdad, envisioned here as a sunny Mediterranean archipelago complete with hippies and break-dancers. After her eventual return to her palatial confines comes the most lovingly protracted of all the stories in Arabian Nights, a documentary chronicle of Lisbon-area bird trappers preparing their prized finches for birdsong competitions. Right to the end, Gomes’s film balances the leisurely art of the tall tale with a sense of deadline urgency—a reminder that for Scheherazade, and perhaps for us all, stories can be a matter of life and death. An NYFF53 selection. A Kino Lorber release.