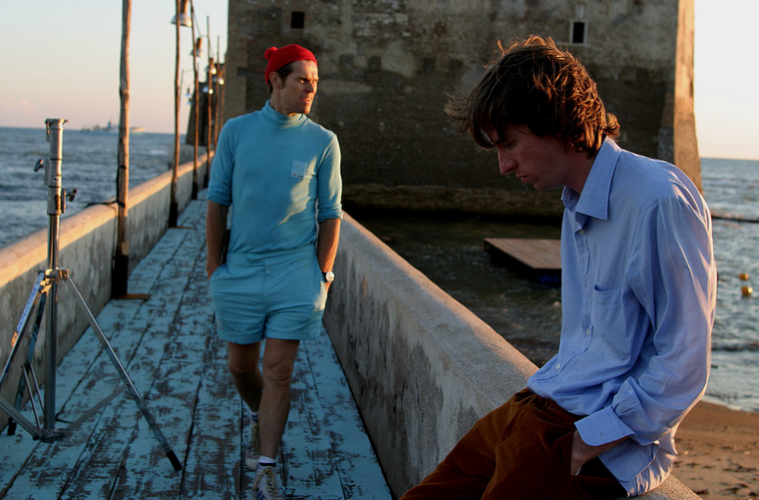 Although it might have been not as well-received as his other films on its original release, Wes Anderson‘s The Life Aquatic with Steve Zissou has certainly built up a following as of late. Today we’re taking a look behind-the-scenes of the sea-bound adventure, thanks to a handful of special features, also currently available on the beautiful Criterion Blu-ray.

First up, following his documentary from the set of The Royal Tenenbaums, the late Albert Maysles (with co-directors Antonio Ferrera and Matthew Prinzing) captured the production once again, this time for a 50-minute documentary titled This is an Adventure. Featuring Anderson getting pre-occupied by the placement of a dog in the frame, he also describes it as his James Bond movie, then has a hilarious reaction when an explosion goes off. It’s full of fantastic snippets from the shoot, as well as something one can never go wrong with: a great deal of unscripted Bill Murray.

For a different look at the shoot, we have the Intern Journal by Matthew Gray Gubler, who played Intern #1 in the film and was Anderson’s actual intern when he was back at New York University. Taking a far different approach than Maysles, we have narration and a step-by-step look at a fairly average day, including interviews (however brief) with much of the cast and crew. Also including a batch of deleted scenes, check out everything below.

This is an Adventure

The Life Aquatic with Steve Zissou is currently available on Criterion Blu-ray. Check out behind-the-scenes documentaries on Rushmore, Bottle Rocket, and more here.