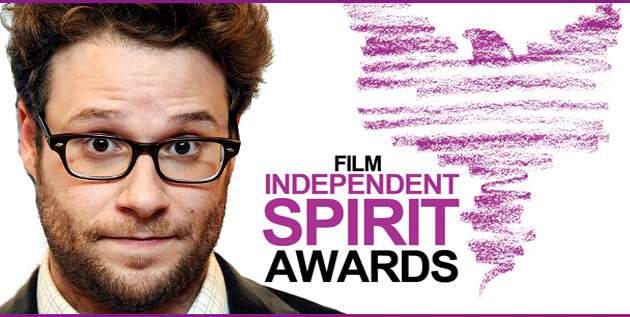 [Voting Spirit] Your Guide to the Indie Spirit Awards Each year the world gawks at the Academy Awards, filled with glitzy celebrities and massive amounts of cash for big budget productions and glossy, global promotions. There’s a lot to marvel at the Oscars, but generally there are few surprises. Part of the Oscar’s predictability problem comes down to the Academy’s well-established biases (comedies, people of color, women directors) that relegate many exceptional films to dark horse or token status. Take as an example last year’s race for Best Picture, which basically boiled down to: which biopic about a wealthy but socially awkward white guy will win!?

Ultimately, the Oscars are better known for looking back than looking forward, rewarding the expected or established over the intrepid and innovative. On the other end of the spectrum is The Spirit Awards, where inventive independent films get all the glory. Founded in 1984, Film Independent’s Spirit Awards has been honoring the best of indie cinema by not only featuring standard categories like Best Picture, Best Director, Best Cinematography, but also offering awards like Best First Screenplay, Best First Feature, and the John Cassavetes Award, which goes to the best film made for under $500,000. With the Academy Awards’ nominee crossover being greater than ever as of late—thanks largely to the Academy’s expansion of nominees in the Best Picture category—these last three honors give the Spirits a distinct edginess. Here is where low-budget but dynamic features that were overlooked by Oscar–like Thomas McCarthy’s multiple Spirit Award-winning debut The Station Agent–get their due. Another intriguing element of the Spirit Awards is that instead of the victors being chosen by some shadowy selection of Hollywood elites, the winners here are determined by a nationwide vote of Film Independent/IFP members, which happens to count me among its ranks. As such, each January and February, I take to the ferociously frigid Manhattan night to attend a panoply of voters-only screenings in an attempt to see all thirty-some nominated films. It’s a privilege I don’t take lightly: if I don’t see all the films in a given category, I do not vote in that category. Beginning next week, I’ll take you with me on this indie-centric cinema quest, detailing my impressions of the nominated features, as well as their shot at winning, and sharing any bonus fun facts that come up along the way, as I did in last year’s column.

This week let’s kick things off by discussing some of the surprises in the nominations and their fallout, beginning with the “snubs.” [Full list of nominees] To many, the most shocking nominee omissions came in the Best Male Lead category, where such adored indie stars as Michael Fassbender (Shame), George Clooney (The Descendants), and Joseph Gordon-Levitt (50/50) failed to garner nods for their critically praised performances. In their place, less high-profile portrayals earned nominations, including Woody Harrelson’s in Rampart and Demián Bichir‘s in A Better Life.

As I haven’t seen all of the above yet, I won’t speculate on why Clooney and Gordon-Levitt lost out to Harrrelson and Bichir, but I can say that Fassbender’s omission from this category is not based on merit, but rather Shame‘s status as a foreign (or in Spirit speak “International”) feature. According to Spirit Award guidelines International Features are only eligible in the category of Best International Film, which succinctly explains Shame’s lack of nominations elsewhere. To this end, many were surprised that the silent romance from France The Artist qualified outside the International Feature category, where it garnered five nominations including Best Feature. Thankfully, THR breaks it down:

“Film Independent earmarks its awards for American-made features produced for $20 million or less. According to the group’s submission guidelines, an eligible feature must have been made by a U.S. citizen or permanent resident in at least two of the following categories: director, writer or producer. It must be set in the U.S. and at least partially financed by a U.S.-based company.” Of course, set in silent-era Hollywood The Artist does take place in the United States. Furthermore, though its production companies are French, one of those is Warner France, which is the foreign satellite of a Burbank-based production company. And finally, while Spirit-nominated writer-director Michel Hazanavicius is French, he is also a permanent U.S. resident, who made the film for roughly $12 million dollars. As such, The Artist qualifies on each count, and so its French star Jean Dujardin earned a well-deserved spot in the Best Male Lead race. While some are fuming over this early award season favorite’s scene-stealing Spirit presence, I’m personally thrilled as The Artist was one of my favorite films of 2011, and I cherish the opportunity to write more about its jubilant and sensational storytelling.

There are more noteworthy indie performances that did not get nods this year (Paul Giamatti and Amy Ryan from Win Win come to mind), but rather than taking this as a detraction of the Spirits, I choose to see it as the promise of emerging talent getting recognized. Of course, not everyone is so willing to accept the omission of certain performances. In fact, the so-called “snub” that has got the most press was not one that surprised critics as much as it did one often criticized filmmaker, the very vocal Kevin Smith.

Yes, despite having marred his indie cred with such studio slop as Cop Out and Jersey Girl, Smith continues to consider himself the ultimate arbitrator of independent cinema. And he has determined that his latest feature, the highly political but sloppily executed Red State, deserved a number of nods, or as he so eloquently put it:

Now, let’s sidestep the fact that the biggest buzz Red State received was not for the film itself but rather for Smith’s bizarre faux-auction after its Sundance premiere. Let’s also overlook Red State’s dismal critical reception and poor box office performance that pulled in $3 million less than its estimated budget, as The Spirit Awards are not known for focusing on these attributes. Instead, let’s consider that horror films–which are generally ignored by most major award shows–are often given a decent shot at the Spirits. Just last year Ashley Bell earned a nod for her gut-wrenching performance as a girl possessed in The Last Exorcism.

Other horror films like Paranormal Activity and The Signal have also garnered nods in First Feature and the John Cassavetes Award respectively. This suggests that these rare horror honors usually go to first-time filmmakers and low-budget productions that managed to do something striking in an underrepresented genre. Red State does not succeed on either of these levels. Smith is established, and aside from some cruel characters and icky gore, there’s little to fear in Red State and even less to honor. As a former Smith acolyte, it’s disturbing to me not only that he’s no longer making Spirit-worthy work, but also that he seems genuinely unaware of it.

Still, let’s not let his rant (or mine) spoil the fun of the 2012 Spirit Awards as there’s a lot to look forward to. Beyond lauded performances from feminist/heartthrob Ryan Gosling (Drive), breakthrough ingenues Shailene Woodley (The Descendants), Brit Marling (Another Earth), and Jessica Chastain (Take Shelter), there’s the latest from heralded comedy-helmers Woody Allen (Midnight in Paris) and Alexander Payne (The Descendants),  as well as sensational debut narratives like Bellflower and Pariah, and the tackling of a wide array of taboo topics! In short, it’s going to be a blast. So check back each Tuesday as I make my way through 38 nominated films with a total running time of 3,873 minutes.

Which is your favorite Spirit nominated feature? Do you agree Clooney, Gordon-Levitt, Giamatti, Ryan, and/or Red State was snubbed? What do you make of Smith’s tirade and/or Kristy’s response? Sound off in comments or tweet @Kristy.