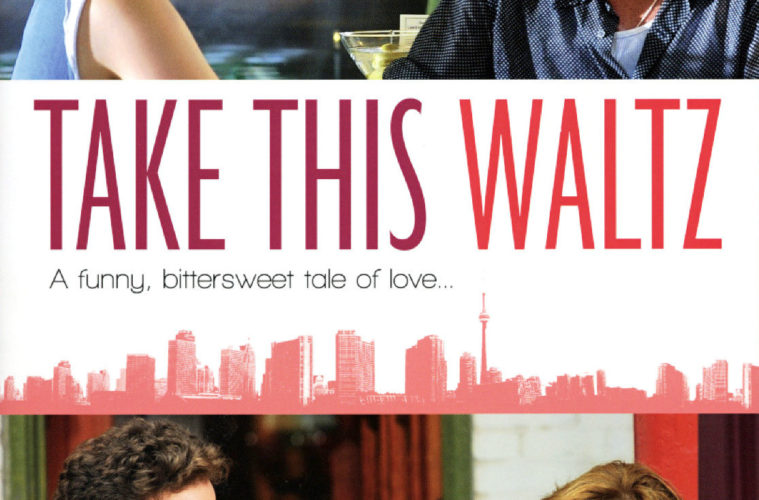 Films dealing with break-ups have the trouble of easily falling into two camps. Either the work is genuine and emotionally devastating like a Blue Valentine or faux romantic and absolutely trite like The Break-Up. Having already wowed the world with her debut feature of complete authenticity dealing with Alzheimer’s destructive power on love, Away From Her, I hoped Sarah Polley had her finger on the pulse of heartache and would carry it through to her sophomore work, Take This Waltz. Unfortunately, although it is brilliantly acted and contains some amazingly beautiful passages, it never was able to prevent itself from eventually ringing false.

Perhaps I’m too much of a romantic, but it’s hard to get behind a work that holds cheating as a commonplace activity we should simply shrug our shoulders at and believe the hollow words, ‘new things get old’, as gospel. Old doesn’t necessarily connote bad, yet in as far as this film goes, nothing could be worse. Polley nicely depicts the marriage of Lou (Seth Rogen) and Margot (Michelle Williams) in its rough patch of crossed signals and indifferent response as though willing us to believe she has a reason to stray. He’s working hard on a cookbook—making chicken every night as a result—and therefore has his dedication confused as ambivalence to Margot’s romantic embraces at the stove. She yearns to be touched as she was during courtship, the spontaneity of young love replaced now by the consistent lull of five years together.

You can’t blame her for taking a shine to the fresh new face of Daniel (Luke Kirby) on a business trip, but can to her unlocking her soul so easily to him. The coincidental impossibility these strangers live across the street from each other back home ends up being so contrived you have to accept it because of how hard it’s trying. But Polley never let’s us forget the continuing love between Lou and Margot, never let’s her do more than talk and pretend with Daniel. He is a ‘gentleman’ waiting for a married woman to make the first move, but she is afraid of hurting the current/former man of her dreams—a sweet guy who would never fathom doing the same to her. And thus the love triangle transpires in secret, pulling Margot this way and that, ever forward to a decision whose choice can never be perfect. Whomever she ends up with will only be half the man she desires.

So, Take This Waltz becomes a depiction of one woman’s mid-life crisis at 28. Age is now meaningless as people hit this wall earlier and earlier each generation. Williams portrays her confliction brilliantly despite being inside an overwritten, overly cute screenplay. Whereas her bond to Rogen is natural, honest, and funny, it all gets subverted by the odd inclusion of baby talk with weirdly eccentric attempts to connect in a sexually juvenile way which only breeds awkwardness. Couple this with her too comfortable too quick relationship to Kirby—playfully calling each other asshole at the start, making me think they were married and only role playing strangers before Lou is introduced—and it’s hard to watch her straddle the line of happiness when it appears she doesn’t know what its meaning. This fracturing of her heart into two people with disparate needs is mirrored by Polley’s mixed direction. Characters are added as mere plot device—see Sarah Silverman‘s impressively serious take on Lou’s sister Geraldine—and choices are made that beg the question, why? Why are you showing us a shower scene of naked women talking about love? Perhaps being a male, I just can’t comprehend the vulnerability(?) at play, but so many moments like this hinder me from clearly remembering the stunning sequences. I want to recall an amusement park ride’s aural assault of “Video Killed the Radio Star” blaring as a warm red glow showers Williams and Kirby in its display of euphoria’s abrupt nature as a hallmark moment of clarity. And a climactic time lapse of sex, love, excitement, and home towards the end is a magnificent piece of filmmaking ruined by the snail’s crawl of twenty more minutes to go afterwards. Instances of cinematic wonder are sadly always dulled by the contritely written cutesy bits I’d rather forget.

This disappointment is a detriment to some wonderful performances. Rogen has never been better in his attempts to actually act, a later emotional montage of his lack of comprehension on the situation at hand a stirring moment. He and Williams have a great implicit rapport like a married couple would, her dealings with Kirby holding a palpable change in her demeanor. She shows her inner struggle perfectly and does make you want to see her end up with her new love as his nonchalant confidence hides his own vulnerability to deliver some great laughs and emotional monologues that win us over. But while we can take turns enjoying both men, Williams’ Margot must choose and live with her decision by never turning back. It’s a devastating realization that will affect so many more people than just these three, the scope and weight of the situation far larger than the personal quest for joy it should be.

A lot of the film hinges on a fear of being in between and one could say this implies the love between Margot and Daniel is fleeting. She’s in a rut and wonders about leaving Lou but can’t bear the resulting loneliness. So she sees a shiny new toy to help get her through, a man who has fallen for her as deeply as her husband and risks the same destruction. Plot devices like her love of niece Tony and sister-in-law’s alcoholism manipulate and ruin all sense of naturalism, but underneath does live a beautiful tale of life’s hard choices. It’s difficult to champion a marriage’s end and Polley’s ability to make me only angers me more. But I know this anger is in myself and not the film. She does, after all, find a way to end with both a glimmer of hope and the danger of humanity’s fickle desire for more. I can therefore applaud while still frowning at the potential Take This Waltz had for greatness, its finished product equal parts magic and unfortunate disappointment.

Take This Waltz is currently playing at the Vancouver International Film Festival.