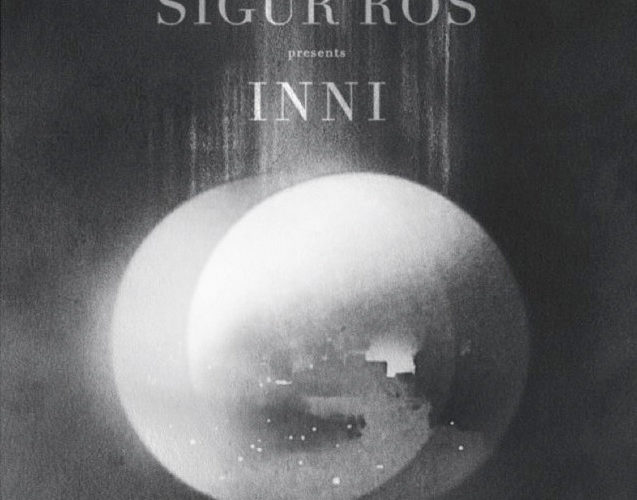 If you go into Inni thinking you’ll receive Heima Part 2, you either be sadly disappointed or extremely grateful because it is anything but. Rather than show us Sigur Rós’ atmospherically sumptuous music against the gorgeous expanse of their Icelandic homeland, director Vincent Morisset captures the bombastic energy of one performance in a monochrome, scratchy gray. Shot with intimate compositions of abstract shapes and completely unbalanced framing, we experience the assault of being at the concert hall. Through a show from November 2008 at Alexandra Palace in London, we are transported to a world of raw, unbridled aural chaos—the beauty and awesomeness of the band let loose to travel freely beyond the stage.

Whereas their first documentary infused a lot of interview footage with the artistically controlled performances, Morisset has decided to pair his stripped down visuals with a limited archive displaying the world’s ignorance of their origins. With questions like NPR asking if the boys started by playing “normal music” before evolving to where they are today or the description from one about their sound, “We’re a very serious heavy metal band—and we worship the devil”, do not expect direct answers. It’s the hilarity of the media’s need for cookie-cutter history points that elicits laughs from the audience, real fans of the music uncaring as long as the work continues to impress and captivate. While we do learn tidbits such as the origin of the name Sigur Rós coming from Jón Pór Birgisson’s sister Sigourney Rose, diehards will already be aware. It’s the musicality and uncontrolled aesthetic we want to enjoy.

And those involved in the film do not disappoint on this desire. The track-listing consists of nine songs spanning the band’s discography, heavily infused with newer work off of Með suð í eyrum við spilum endalaust—unsurprising due to the tour filmed. Jónsi is shown with bow and guitar in hand wearing a feathered get-up at the microphone. Orri Páll Dyrason sits behind his drum kit with an angular crown atop his head. And Georg Hólm and Kjartan Sveinsson are seen as well as the close-ups of faces, hands, feet, and instruments intercut with wideshots of the stage. Once “Sæglópur” begins, the screen goes to quadrants; later on we seen a shot of the textured backdrop playing during the show; and the bubbled orbs of light glowing towards the end become filled with the figures of stock footage pulsing to the sounds. By the time “Lúppulagið” plays, the screen goes into an epileptic seizure-inducing strobe of visuals as the music blares and confetti falls. A few archival interludes do possess some uncovered gems too, though. It isn’t all a laugh at outsiders trying to force them into a mold. One bit shows the band getting kicked out of a room for incessantly playing a piano when the bar had closed and another gives us a look at a performance from 1999 shot by a fan who wished to remain anonymous. It’s a welcome historical account without context, spliced in with the concert footage to add to the band’s abstract sensory identity. More a formal look into music’s power to overwhelm, the film’s 74-minute run-time definitely makes it into a work of art before a true documentary with any sort of linear story. This is a concert film, through and through, and it captures the magic of a show to perfection.

If reminiscent to anything I have seen in the past, Radiohead’s Meeting People is Easy comes to mind with its pastiched composition of song and sights which actually bred the music video for “Palo Alto”. Inni never attempts to be more than it is, giving us an artistic display of one director’s idea of the band’s intrinsic allure and ability to enthrall. A friend of mine still talks about how a Sigur Rós’ opening performance for David Bowie totally disoriented him to the point of blacking out. After watching this film, I can believe him. The ghost-like, ethereal quality of the visuals mixed with the otherworldly sounds can captivate in their intensity as well as carry you to another plane of existence. Let the music wash over you, enjoy the religious experience on screen, and convert all your friends into lovers of uniquely original music. Since we won’t all have the chance to catch them live, the raw energy displayed here could be a damn close facsimile.