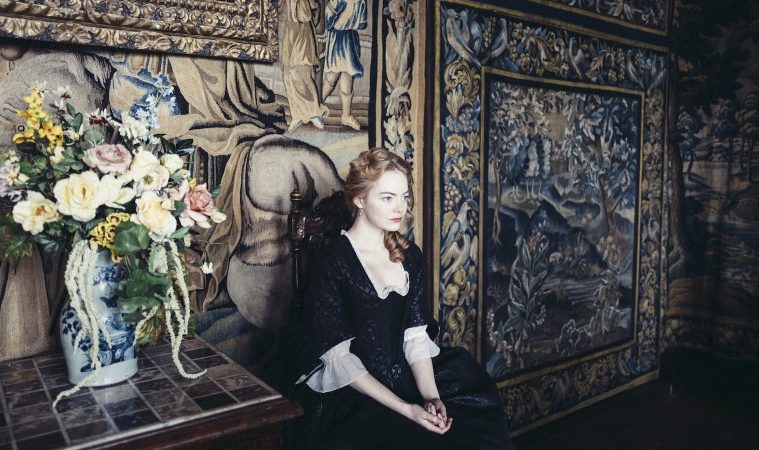 Venice Review: ‘The Favourite’ is a Zany, Exhilarating Period Drama

The English royals populating Yorgos Lanthimos’ rollicking period drama The Favourite may not know much about the country’s ongoing war with France, but they’re formidable connoisseurs in duck-racing and pineapple-eating. A year after The Killing of a Sacred Deer, the Greek director ventures into a starkly different terrain with a period feature chronicling internecine feuds among early-18th-century English bluebloods. And as if the plunge was not remarkable enough for an auteur known for his bleak and absurdist dystopias, The Favourite marks the first time Lanthimos is not credited as writer.

Penned by Deborah Davis and Tony McNamara, The Favourite zeroes in on three real-life characters: Queen Anne (Olivia Colman), her best friend and confidante Lady Sarah (Lanthimos’ habitué Rachel Weisz), and Lady Sarah’s cousin, Abigail (a pitch-perfect Emma Stone). In the candid words of Prime Minister hopeful Harley (Nicholas Hoult), one of many wig-wearing politicians and aristocrats idling about the Queen’s palace, Abigail “was once a Lady, now a nothing.” Thrown into poverty by an alcoholic and gambling-addicted father, Abigail shows up to court covered in mud to beg her cousin for a job. Moved by her plight (moved being an euphemism here, as Weisz exudes a ruthless cool that echoes her performance in The Lobster), Lady Sarah sends Abigail to work in the palace’s kitchen, from which she is quickly relieved after successfully ingratiating herself with Queen Anne, thus launching her ascent into the palace’s higher echelons and threatening Lady Sarah’s own spot as the Queen’s best friend and lover.

Who of the two may be ill and invalid Queen Anne’s favorite is the question ricocheting around the film’s exhilarating autopsy of an incestuous elite, at once so utterly detached from the kingdom’s troubles and viciously in tune with their animalistic drives. Over eight chapters, Lanthimos captures all out-bonkers displays of royal excesses, from ducks racing around the palace to grand ballroom parties, one of them featuring a breakdance-like routine between Weisz and Abigail’s suitor, Masham (Joe Alwyn), that ranks high among the film’s most memorable scenes.

The bilious aristocratic debauchery coalesces to a viciously captivating degree with Queen Anne. Played with majestic bravado Netflix’s future Queen Elizabeth II Olivia Colman (The Crown’s aficionados should make Lanthimos’ work a priority ahead of the series’ third season), Anne stands out as a chronically insecure monarch, a puppet easily manipulated by the two women on whom she relies. By her thirties, real-life Anne had grown increasingly lame; despite seventeen pregnancies by her husband Prince George of Denmark, she died with no surviving children, and in Lanthimos’ universe of human-animal metamorphoses, she mourns their deaths spending hours playing and cuddling with seventeen pet rabbits — “my children,” as she introduces them to a stunned Abigail.

Juxtaposed with short-lived moments of empathy are others when she stands out à la Monty Python’s Mr. Creosote, puking and eating ad nauseam. Interestingly, Lanthimos treats Anne’s sexual urges as a cannibalistic desire, the Queen biting and chocking on Lady Sarah’s flesh. There was much talk ahead of The Favourite’s Venice premiere over whether Lanthimos’ latest offering would be billed an LGBTQ drama. It’s a label that ought to be handled with care. More than a vindication of Lady Sarah and Abigail’s right to express their sexuality, the liaison between the two women and the Queen comes across as a means to an end, a calculated game that allows Abigail to return to her aristocratic roots and Lady Sarah to hold the government and household together — meanwhile, the Queen sinks deeper into madness and paranoia.

A triumph of production and costume design (courtesy of Fiona Crombie and Sandy Powell, respectively), The Favourite is a joy for the eyes. Robbie Ryan’s cinematography alternates camera spins and fisheye lenses, capturing some stupefying interiors and the distorted perspective of solitary royals populating them – mirroring, to some degree, the visual experiments Lanthimos had toyed with in The Killing of A Sacred Deer. Endlessly quotable and serendipitously timely — all the more so considering the whole project was conceived nine years ago — The Favourite is a zany, piercing close-up on three women so replete with swagger as to reduce their male counterparts to disposable extras. “Your mascara is running,” Lady Sarah tells a furious and heavily made-up Harley. “If you need to fix yourself, we can resume this later.”