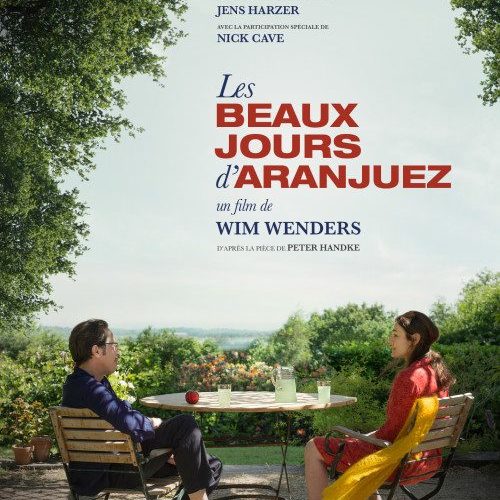 Shot in 3D on a grand-looking estate, presumably on the outskirts of Paris, we follow the stream of consciousness of a woman (Sophie Semin) recalling her romantic exploits as a man (Reda Kateb) lightly goads her on. As she slowly reveals more and more of her previous conquests (or “silhouettes,” as she calls them), the man begins to tell his own tales of a time spent in Aranjuez. From her we pick up details of location, sensations, and the weather. From him we get flying sparrows, mulberry trees, “high summer” and so on. From what we can gather, in case it wasn’t clear, genders do tend to be different.

While often a bit of a slog, the film is not without a sense of humor, and the director still knows how to execute a sharp surrealist flourish from time to time. At one point the man hums the tune to The Trogg’s “Love is All Around” as the woman describes a sensation of once feeling a partner’s “despair” when he was “inside her.” At another moment the man spots the yellow leading jersey of the Tour De France through a pair of binoculars as it cycles along, solitary, nearby them. The wind seems to rage anytime the woman gets aroused or excited. Handke himself even pops up to do some gardening. Wenders’ use of music in his films is often brilliant, but here it seems clunky and overtly literal by comparison. We jump the shark at the exact moment when Nick Cave appears on piano, in the hallway, for a rendition of “Into My Arms.”

Perhaps the gentlest artist to emerge from his celebrated contemporaries, Wenders has always been a great admirer of Americana (Paris, Texas, The American Friend) and Yasujiro Ozu (Tokyo Ga), and elements of both can be seen, respectively, in the music and camera angles being used. Considering that the film is in itself an attempt to put on screen how a writer might visualize their story, Wenders’ use of 3D does offer an interesting spatial and meta quality to the proceedings. However, such confident flourishes are brief or at times redundant and ultimately fail to elevate the near constant romantic dialogue of Handke’s text. Kateb and Semin (even more so) find great joy and dedication in their work, but as a 97-minute film, their conversation simply fails to hold the viewer’s gaze.

That aforementioned Simpsons reference should not necessarily be seen as a direct dig at Aranjuez. We can presume the show’s legendary writing team probably had people like Bergman and Fellini on their mind when they showed what a blue collar American might think of a European film at the time. It might, however, go some way to explaining how laborious and old-fashioned Aranjuez feels, like a strange parody of intellectual cinema, or some sort of misremembered ideal from a different time.

The Beautiful Days of Aranjuez premiered at the 2016 Venice Film Festival.