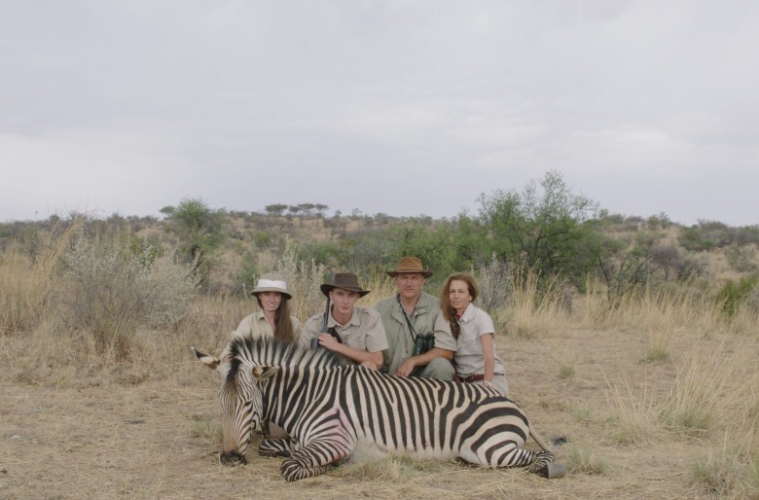 Isn’t it strange how cinema’s greatest misanthropes always seem, deep down, to be the most empathetic. It’s as if the total lack of sentiment for (and complete fascination with) human nature somehow clears the way for a more profound understanding. Lars von Trier often shows warmth for his most debased subjects before pulling them apart. Michael Haneke might not portray it in his films quite so much, but he comes off as quite the softy when interviewed in the right light. In both his narrative features and, more recently, stylized documentaries, Ulrich Seidl has always been drawn to the seedier corners of Austrian society. Naturally, he feeds his subjects plenty of rope, but there’s always a lingering suspicion he might be on their side. His new doc, Safari, follows a group of so-called “canned hunters” in Africa, a subculture of people that choose to pay great sums of money to simply pull a trigger, grab a quick selfie, and take home the bust of the slaughtered animal. Just a year after Cecil the lion, the great man could hardly have chosen a less-popular subject and, of course, it’s a perfect match.

Safari focuses on a small subject group and cuts between three core parts: interviews with the hunters (in Seidl and cinematographer Martin Gschlacht’s signature staged, head-on manner); footage from the hunt; and gruesome images from the slaughterhouse. The interviews have the same bizarre quality as those in Seidl’s last outing, In the Basement, a sort of drab awfulness that’s both unsettling and strangely matter-of-fact. While unheard by the audience, Seidl never appears to grill his subjects for answers. There’s a quiet, relaxed formality about it all — nobody seems to be on the defensive — and Seidl gets each subject to speak almost philosophically. The kids of one family (both in their late teens / early 20s) talk about mortality and, in a strange way, justify their actions as a euthanization process. Others compare their actions with the even greater brutality of a slaughterhouse for cattle. Racism leers its ugly head when the topic of local law and government is brought up. One woman presumes all black people could be faster than white people “if they wanted.” This is the caliber of human being on offer.

Seidl cuts these interviews with scenes from the hunt, offering an on-the-ground view of events as they happen. It’s a sordid process. The tourists head out in full hunter garb, looking like they’ve seen Indiana Jones a few too many times. They’re taken to the location by a professional hunter, who gets them in range and even sets up their shot. When the job is done, they high-five and offer the vaguely fascistic congratulations of “Hunter’s Hail!” They pose for a quick selfie with their prey, often artistically staged by the Safari guide, and then head back. One man pats the dead carcass on the head and says, “you put up a good fight.” While otherworldly in many ways, these scenes tend to drag due to a lack of footage.

The final hunt goes from upsetting to horrendous, with Seidl showing the prolonged death of a dignified old giraffe. The humiliating transport and detailed slaughter of this creature is, without doubt, Safari’s most challenging and horrifying sequence — many in the theatre were quick to head for the door — and might also be its most profound. Naturally, we’re reminded first of the sheer brutality of the situation, then of the fact that these tourists never really have to dirty their hands. Most interestingly, though, is that we’re asked to empathize with the workers of the slaughterhouse. However grotesque, it’s a job for these men, and the longer you look at it, the more desensitized you become. Knives, meat, blood, and guts: Hannah Arendt’s “banality of evil” in full flight.

We can be assured Seidl has no time for any of this. His fascination is that of an anthropologist with a wide-angle microscope. Safari is the kind of film nobody else could make. Seidl knows how to push the audience’s buttons, but there’s nothing preachy, self-righteous, or demeaning about it. It plainly and artistically presents the facts, and leaves enormous space for the audience to make up their own mind.

When asked about Ulrich Seidl yesterday, Wim Wenders told me “we need him.” That sounds about right.

Safari premiered at the 2016 Venice Film Festival and is currently without U.S. distribution.