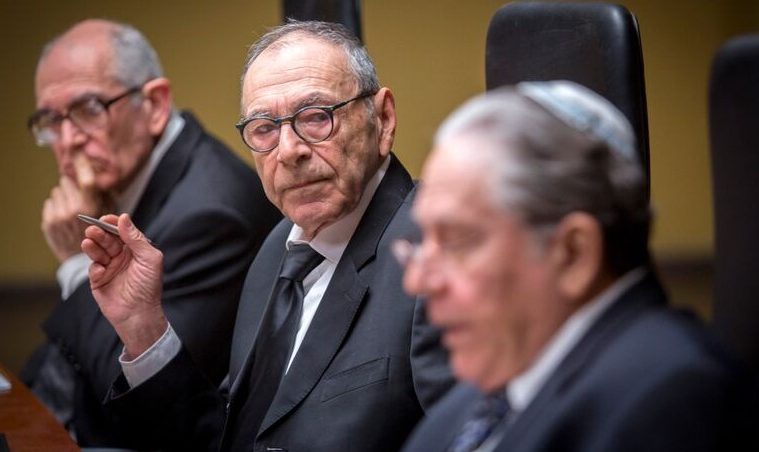 Amos Gitai is almost a running joke here at Venice. He’s had a film in competition on the Lido for the last three years (Tsili, Ana Arabia and Lullaby to My Father), none gathering prizes or even overly positive reviews from assembled critics. But his new film, an essayistic docudrama on the assassination of 90s Israeli Prime Minister Yitzhak Rabin, avoids the structural flaws and dullness of his previous few works. Instead, it’s an impressive addition to the director’s oeuvre, which might have a chance at a strong reception here at Venice – if only as a loyalty bonus to Gitai for keeping coming back.

Rabin was a significant figure in the Israeli-Palestinian peace process, a war hero who gave peace a chance, making inroads with the PLO and helping to bring the Palestinian National Authority into being. Along with Yasser Arafat and Shimon Peres (his immediate successor), he won the Nobel Peace Prize after signing the Oslo Accords, but his actions split Israeli society, with right-wing political rivals Likud and religious hardliners seeing him as a traitor for giving away land they saw as belonging to Israel. Rabin was assassinated by Yigal Amir, a right-wing radical Jew, who though the any giveaways to the Palestinians acted against the Torah. But Gitai’s quest doesn’t circle around Amir or his extremist vision of Judaism, but the climate of extremism and Israeli exceptionalism was the real murderer of the statesman.

It isn’t quite an Israeli version of JFK, but Rabin, the Last Day rivals Oliver Stone’s film in seeking to pose questions that official studies have refused to explore. In JFK, the events were after the Warren Commission; here Gitai frames the actions within the official Shamgar Commission into security and intelligence failing behind assassination. The commission was denied the chance to investigate the political and social climate around the actions – something Gitai tries to rectify.

This is an absorbing watch, remarkably innovative in structure and convincing in its assessment of various Israeli governments’ dithering attitude to extremist Zionism that has led to Netanyahu’s Israel belligerent rhetoric today. The film combines actual footage (the killing was, remarkably, filmed by TV news) with re-enactments and dramatized scenes, all of which Gitai says are verbatim from written transcripts.

Much of the film takes place as testimony to the Shamgar report, including countless bureaucrats passing the buck on institutional failings. The only talking heads are a brief interview with Peres that opens the film and one with Rabin’s wife Leah. Gitai also re-enacts scenes from inside extremist religious sects where Amir (Yogev Yefet, one of the few recurring characters) sees theological leaders advocate Rabin’s death. In one scene, Gitai dramatizes the climate of paranoia with an extremist Zionist, who also claims to be a clinical psycologist, bursting into tears because she can’t have a “schizoid” prime minister leading her country.

Gitai relates these interior dramatizations, with their cold, dank lighting, to TV footage from grand Likud demonstrations, with placards portraying Rabin as an SS officer or behind crosshairs. Binyamin Netanyahu preaches at rallies where crowds shout “death to Rabin.”  At one point, a commission lawyer says this “school of thought legitimized violence in the West Bank.” Part of what’s urgent about the film is in Gitai’s unapologetic pointing to Netanyahu as a source, rather a symptom of that extremist dictum that infiltrates conversations about the Arab-Israeli conflict even today.

At 153 minutes, The Last Day is too lengthy a study, especially for such a somber subject, but it’s formally challenging and the curious, theatrical re-enactments are well-choreographed, kinetic scenes. “Sedition is no grounds for incrimination,” says one Commission member. For Gitai and sympathetic listeners, sedition is a engrossing subject for trial by cinema.

Rabin, the Last Day premiered at the Venice Film Festival.