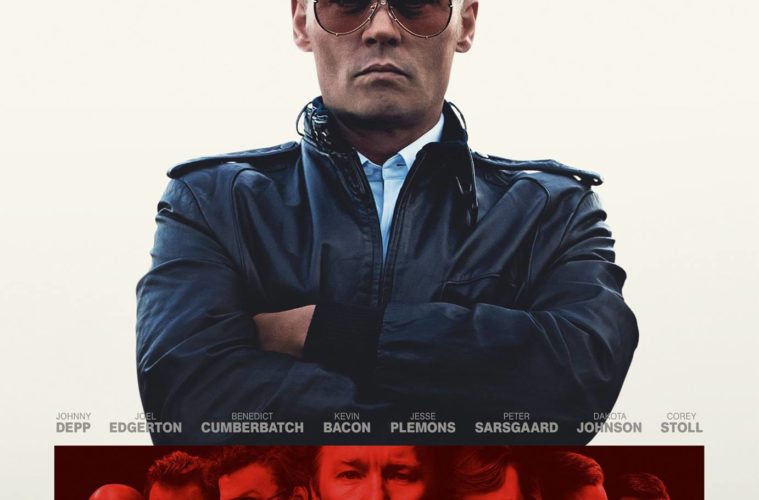 Premiering out of competition at the Venice Film Festival, Scott Cooper’s Black Mass goes deep inside Boston’s underworld to chronicle the life of real-life gangster James ‘Whitey’ Bulger (Johnny Depp) and the peculiar ‘alliance’ he struck with some FBI agents to fast-track his criminal career. Adapted from Dick Lehr’s book on Bulger, Black Mass is a solid, straightforward if not particularly memorable addition to a genre that has seen a number of illustrious contributions in recent years, from Eastwood’s Mystic River to Scorsese’s The Departed and Affleck’s The Town.

And to its credit, the film gets into it right off the bat – recreating a sweaty, crumpled 1975 in South Boston where small-time gangsters get into cars four at a time, and one of them is probably not making the trip back. Helping old ladies from the neighborhood with their groceries and lashing out at beat cops – who are of course glorified messengers carrying a rival’s threat – is all part of the daily routine for the Winter Hill gang. That is until local boy turned FBI agent John Connolly (Joel Edgerton) rides back into town with a mandate to eradicate the Mafia, and decides that a mutually beneficial agreement with his childhood friend Jimmy Bulger is the most efficient way to accomplish his goal.

Essentially running a con on the Bureau for years, Connolly plays up Bulger’s role as an informant while shielding him from prosecution and letting him rise to the top of the criminal food chain. A kinetic bundle of posturing and self-assurance, Edgerton is heartbreakingly unaware as the product of a system in which “what’s written on a piece of paper is less important than blood, or loyalty.” Which, of course, is exactly the raison d’être of the Mafia he’s trying to bring down, but the irony is lost on him. Similarly, Black Mass has no problem in actually spelling out the ‘kids go straight from playing cops and robbers to doing it for real’ cliché, but the amount of self-delusion on both sides at least keeps things interesting. Thanks to the deposition-recording framing narrative, every gang member in the movie – starting with Depp – is portrayed as very eager to let the record state he’s not a rat, before proceeding to rat on his pals.

Expectations of Depp are high on this one, now that audiences seem to have finally tired of his infamous cartoonish performances. The role of Jimmy presents a nice opportunity for some middle ground between those and his more ‘serious’ turns – this time he plays a gangster (like in Donnie Brasco, Blow, Public Enemies) and he can do his thing behind a mask. Pale, blue-eyed and bald – if not for the white tufts of hair seemingly about to take off from the sides of his head – he looks like Goodfellas’ Ray Liotta in an advanced stage of transformation into Gary Oldman’s Dracula. Depp’s magnetism serves the character well, even buried underneath the glacial menace of a man whose mission in life seems to be the manipulation of others.

Edgerton is fueled by a much simpler, more earnest energy, but the two characters are prisoners of that same distorted bond, which Benedict Cumberbatch – as State Senator Billy Bulger, Jimmy’s brother – seems able to navigate more cunningly. The unspoken side of these relationships is where Scott Cooper really shines as a director, and what made his previous thriller Out of The Furnace even better than his debut Crazy Heart. The smaller the scale, the better he is at depicting the drama of intimacy, and the decade-spanning, crowded story of Black Mass definitely takes something away from that.

In addition to the cinematography from Masanobu Takayanagi (who also did ace work on Warrior and The Grey), the film has much in common with its Venice companion Spotlight, and even manages to top the already excellent cast of Tom McCarthy’s pic with a near-infinite supply of great character actors popping up even late in the story. Rory Cochrane, Jesse Plemons and W. Earl Brown add rich details to the portrayal of Jimmy’s gang, and it’s a pity that women once again get the short straw, reducing screen time for actresses like Julianne Nicholson and Juno Temple to one or two short scenes – which is still better, I guess, than Sienna Miller being cut out of the movie entirely.

Black Mass premiered at Venice Film Festival and will be released on September 18th.