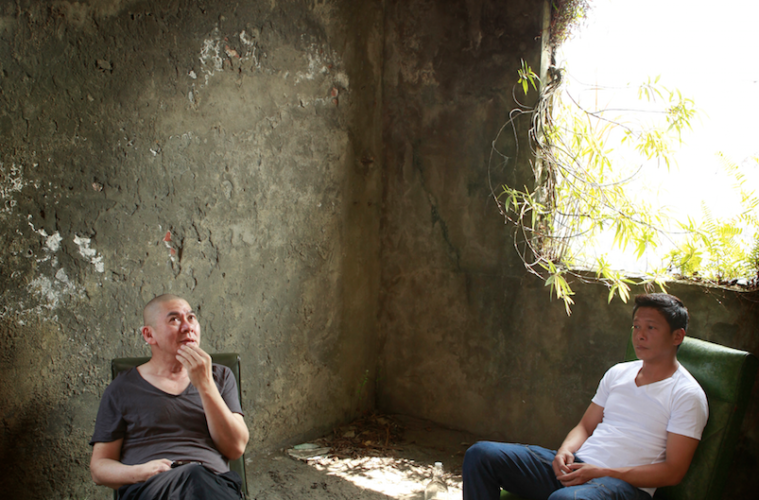 It’s always been easier to review Tsai Ming-liang’s films than to make sense of them. Characterized by an often impenetrable language of silence and immobility, the Malaysian-born, Taiwan-based filmmaker’s work triggers all kinds of intuitive response that writers crave, yet those same writers might be hard-pressed to explain what they’ve just seen on screen. In this sense, Afternoon poses the exact opposite dilemma, in that it’s by far the most verbal and straightforward project from Tsai – but how do you assess, evaluate, grade something so close to life you’re not even sure what to call it in cinematic terms?

Featuring Tsai and his long-time actor-of-choice Kang-sheng Lee as themselves in an extended, unscripted conversation shot on static camera, Afternoon has no discernible narrative arc, resists somehow also the categorization of documentary. Is it an interview? A visual essay? A behind-the-scenes reel? An improvisational performance piece? Ultimately the initial festival designation of “non-fiction” might just have to do. As with his narrative work, Afternoon is formally stripped to the very essential. One dilapidated room with two openings in the brick wall. Two chairs supporting a couple of plainly-dressed, middle-aged men. The unmoving gaze of a single camera which, except for three momentary blinks, records the whole thing uninterrupted. There are no visual tricks being played and, with one glance, you feel like you’ve seen all this unspectacular square of image has to offer. This lack of distraction serves the film well, though, because it’s all about these two people: director / actor, mentor / pupil, creator / muse. After working together continuously since 1991 and leaving behind one of the most remarkable collaborative filmographies in world cinema, what has their relationship become? What do they have to say to each other?

Turns out they have, or at least Tsai has, plenty of things to say. Beginning emotionally with the wish to have his last words documented before deteriorating health leads to imminent death, Tsai goes on to talk at length about his upbringing, missing sense of belonging, and how he has experienced some of the saddest, but also the most purely blissful moments of his life with Lee. From there it shifts to his admiration of Lee from a professional perspective and how he has come to be his indispensible alter ego, his motivation for continuing to make movies. The train of his thoughts follows no particular trajectory of coherence or logic. Random tidbits from their past, travel stories and personal losses are thrown in here and there. At times it gets incredibly specific to the point of banal. Lee, meanwhile, smokes and only chimes in every once in a long while, usually prompted by the director who’s noticed the dialogue was again turning into a monologue. As broodingly unresponsive and slurringly inarticulate as Tsai is agitated and eloquent, Lee often tends to bring the talk to a halt or sends it in another direction. So questions would remain unanswered and sentences often start in one place, only to end in a contextually, grammatically discontinued second half.

Isn’t this how we think, speak, perceive the world though? Continuous but chaotic, with no chance of a second, better take afforded. At the very beginning of the film, Tsai says with some exasperated embarrassment to the camera: “I don’t know how to imagine the crew not being there!” But as the defenses of the two subjects gradually get lost in their somewhat jumbled reminiscence, the pretenses also drop away. What we get is a rarified access into the minds of two individuals irreversibly joined by 20+ years of shared history. A history that, mixed with feelings of gratitude, attraction, caring and appreciation, hangs in the open space around them and fills the pauses with poignancy. All this is not necessarily to say Afternoon is a good film or an enjoyable film. Returning to the opening question, is it even a film at all? For those unfamiliar with Tsai’s work or uninterested in him and Lee as artists, it might seem like the most tedious stunt of self-promotion, an unwarranted act of indulgence. For those who ever wondered what sustained the Scorsese-DeNiro collaboration or how Diane Ketaon and Scarlett Johansson gave Woody Allen his creative juices, however, this proves a fascinating look at the chemistry between the inspiration and the inspired. And for Tsai’s numbered but avid fans everywhere, it offers a highly informative, almost voyeuristic peek behind the creation of such masterpieces of urban loneliness as Vive L’Amour or Stray Dogs.

Afternoon premiered at the Venice Film Festival and opens on April 1st at NYC’s Metrograph.