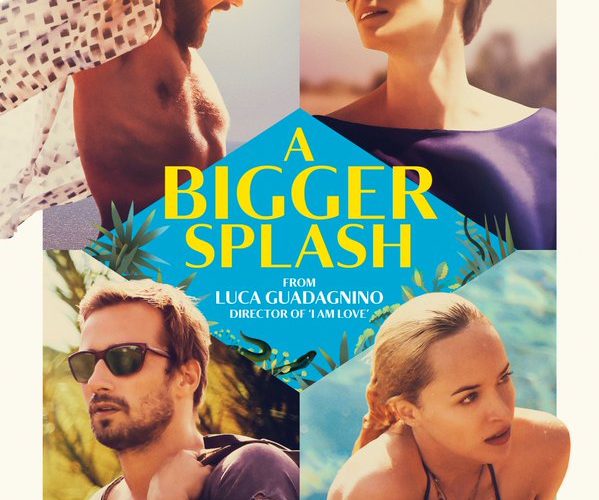 Despite a loose script that justifies little, Italian director Luca Guadagnino’s follow-up feature to his glorious melodrama I Am Love is a sweaty, kinetic, dangerously unpredictable ride of a film. One is frustrated by the final stroke of genius that never came, but boy was it fun to spend two hours inside such a whirlwind of desires, mind games, delirious sights and sounds.

Based on the 1969 French drama La piscine (The Swimming Pool), the story essentially begins as Marianne (Tilda Swinton) and Paul (Matthias Schoenaerts) – a couple vacationing on an Italian island – get an unexpected visit from her former lover and record producer Harry (Ralph Fiennes), along with his daughter Penny (Dakota Johnson). Harry, a raging bohemian who still harbors affections for Marianne, and Penny, a confident Lolita-type who has her sights set on the hunky Paul, will make sure feelings old and new get kindled, leading to frictions that may end up being more than harmless. The screenplay establishes the characters well, fleshing their shared histories out – except for Penny, who shall remain a mysterious property – via numerous flashbacks. Even when the particulars aren’t always clear, you get the idea there’s some trauma in the past, adding gravity to the tension at hand. This is, however, not the most focused of screenwriting. People run errands, prepare meals, engage in swimming competitions, and even break into full-fledged musical numbers. Through these actions you grasp onto a sense of their personalities for sure, but sometimes you find yourself asking where all this is going. The most obvious failing of the script comes in the third act, when a crime is committed and later on, a slap is dealt. These sequences constitute the dramatic climax after the film just spent over 90 minutes building and crafting atmosphere, but the scenes themselves confound more than anything, as both the motivation and the intensity of the actions seem somewhat inexplicable.

With that said, one probably wouldn’t get too hung up on meaning and explanations in a movie this jaggedly hypnotic. In a fundamental stylistic departure from the celestial classicism of I Am Love, Guadagnino opts for a rawer, much wilder look here. The texture of the frames is coarser, the lighting less gentle, the production and costume design ten shades plainer. But if anything, the unrefined, almost primal aesthetics of the film only serve to bring out the rampant carnal energy coursing just beneath the sun-kissed surface, which in turn gets captured by the predatorily alert cameral of cinematographer Yorick Le Saux. In grand, fluent movements, he picks up every signal of flirt, suspicion and panic to striking effect. The aforementioned crime scene is photographed with such immediacy, continuity and scope it engrosses and repulses to equal measure. Also worth mentioning is the boldly instinctive editing by Walter Fasano. By constantly bringing scenes to an abrupt end or cutting between strongly contrasting scenarios, it further enhances the bluntness of the visual experience and keeps you on the edge of your seat. Same goes for the music selection, which is as eclectic as it is eerily evocative. From rock tunes to discordant orchestral notes, they take you by surprise and summon an ominous sense of restlessness even before anything bad happens.

The four lead actors are excellently cast, their vastly different screen presence contributing to the pivotal yin and yang of the mix. Fiennes is on fire playing the philandering music man who “does not believe in limits.” While his grandstanding entrance might strike one as over-the-top, the scenes where he switches from clownish banter to sobered retorts in the blink of an eye give you a hint of the stupendous range and elasticity of his performance. Swinton is her reliable diva-licious self. Even though this is a less showy role for her, she still compels at any given moment with an open face that seems to have no filter for emotions. Belgian it-boy Schoenaerts also has a quieter part but he brings the stoic steadfastness and easy masculinity that’s vital to the picture. The biggest delight of the bunch might be Johnson. After turning in a performance that’s better than it has any reason to be in Fifty Shades of Grey earlier this year, she takes on a role that’s the polar opposite of the demure, repressed Anastasia Steele and runs away with it. Playful, assertive, utterly unself-conscious, she not only holds her own opposite other veteran actors in the cast but again elevates a character that could well have been a harmless cliché.

Realized with extraordinary craft and verve even if insufficiently contextualized, A Bigger Splash might not have achieved the desired impact, but the wicked spell it casts remains a bona-fide stunner.

A Bigger Splash premiered at the Venice Film Festival and will be released on May 4th, 2016.