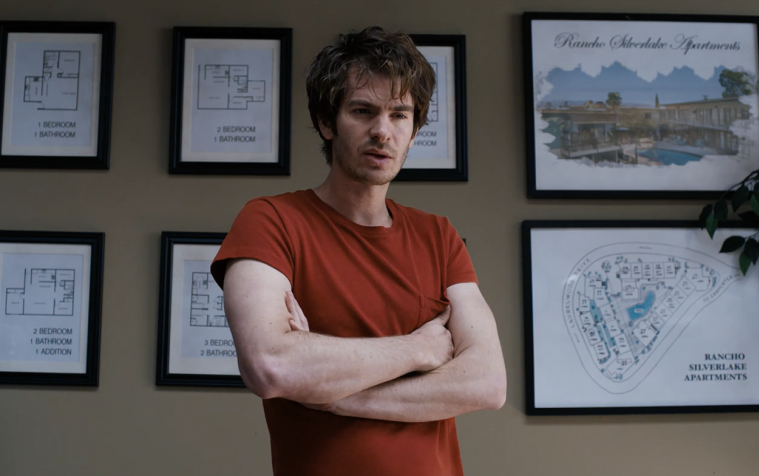 ‘Under the Silver Lake’ Trailer: Andrew Garfield Leads Crime Drama from the Director of ‘It Follows’

After his hit horror thriller It Follows, which packed an unceasing sense of dread, director David Robert Mitchell is back and finally teaming with the distributor that seems well-attuned to his sensibilities: A24. This summer, they will release Under the Silver Lake, an Andrew Garfield-led crime drama that delves into the indie music scene, and now the first trailer has arrived.

The film follows Garfield’s character Sam who goes on a personal quest to track down a missing woman (Riley Keough) in a music-filled Los Angeles, complete with hidden clues everywhere… or so he thinks. From the first seconds, one gets the sense that this will be an altogether different outing for the director, stylistically speaking. With a vibrant color palette and an off-kilter comedic-meets-romantic vibe, not to mention the use of Never My Love, there’s the feeling of an Inherent Vice-meets-David Lynch-meets-Richard Kelly influence.

We’ll have to wait and see if it stops by Cannes to premiere, but in the meantime, one can see the trailer below for the film.

From the dazzling imagination that brought you It Follows comes a delirious neonoir fever dream about one man’s search for the truth behind the mysterious crimes, murders and disappearances in his East L.A. neighborhood.

Sam (Andrew Garfield) is a disenchanted 33-year-old who discovers a mysterious woman, Sarah (Riley Keough), frolicking in his apartment’s swimming pool. When she vanishes, Sam embarks on a surreal quest across Los Angeles to decode the secret behind her disappearance, leading him into the murkiest depths of mystery, scandal and conspiracy in the City of Angels.

From writer-director David Robert Mitchell comes a sprawling, playful and unexpected mystery-comedy detective thriller about the Dream Factory and its denizens — dog killers, aspiring actors, glitter-pop groups, nightlife personalities, It girls, memorabilia hoarders, masked seductresses, homeless gurus, reclusive songwriters, sex workers, wealthy socialites, topless neighbors, and the shadowy billionaires floating above (and underneath) it all. Mining a noir tradition extending from Kiss Me Deadly and The Long Goodbye to Chinatown and Mulholland Dr., Mitchell uses the topography of Los Angeles as a backdrop for a deeper exploration into the hidden meaning and secret codes buried within the things we love.