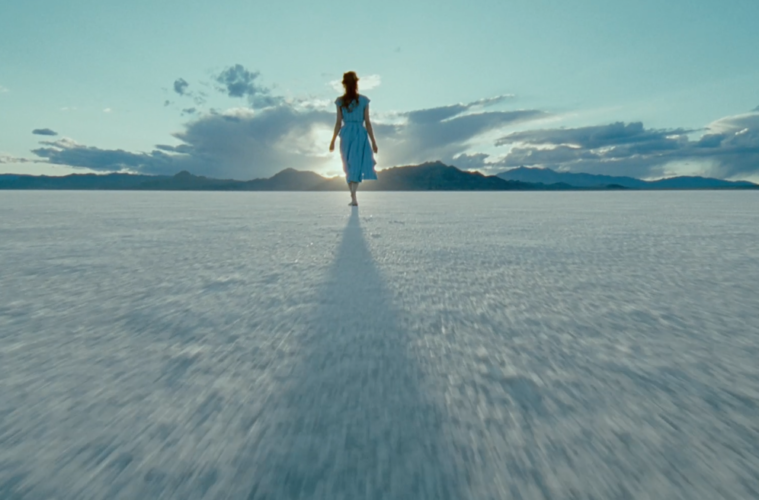 When it comes to the films of Terrence Malick, we can’t be sure what we’ll get or even when they will arrive until we’re actually sitting down in the theater. As he juggles a few, and ahead of the Berlin premiere of his Knight of Cups — which we got more details on this week — we have some more information on his long-gestating Voyage of Time.

After some legal tie-ups, it’s now been confirmed that a 40-minute version with scientific narration by Brad Pitt will get an exclusive IMAX run, followed by a 35mm, feature-length version with narration by Cate Blanchett, which Broad Green Pictures — who came aboard to finance with IMAX — have the first rights to distribute. With no confirmed release date, as for when we can expect it, producer Dede Gardner recently told us it might be a few more years. As we patiently wait, check out the full press release below, which includes the synopsis. Update: See the first look at the film via Broad Green to the right.

VOYAGE OF TIME is a celebration of the universe, displaying the whole of time, from its start to its final collapse. This film examines all that occurred to prepare the world that stands before us now: science and spirit, birth and death, the grand cosmos and the minute life systems of our planet. Malick is working first in the IMAX format for a 40-minute version with scientific narration by Brad Pitt, followed by a 35mm feature-length version with narration by Cate Blanchett.

VOYAGE OF TIME is the first recipient of financing from IMAX’s Original Film Fund, announced in May. The Fund, capitalized at $50-plus million, will co-finance a portfolio of 10 original IMAX films that will enable IMAX’s worldwide network to provide new digital content to its institutional partners in the form of documentaries that employ cutting-edge techniques, innovative filmmakers such as Malick, and embrace fresh new perspectives in documentary storytelling.

”Terrence Malick is one of the most innovative filmmakers in the world, and has literally been designing and making this movie with large-format cameras for over 30 years,” said Greg Foster, Senior Executive Vice President, IMAX Corp. and CEO of IMAX Entertainment. “To be able to launch our Film Fund portfolio with Malick and his imaginative style of filmmaking is capturing lightning in a bottle. We look forward to working with Terry and his producing partners on this groundbreaking film.”

“Terrence Malick is an innovator of epic scope,” said Gabriel and Daniel Hammond of Broad Green Pictures. “We have long admired his work and could not be more excited to partner with him on this project.”

“We are thrilled to partner with IMAX and Broad Green, who, along with our partners at Sophisticated Films and Wild Bunch, provide a combined expertise to ensure Terry’s vision is carried out at the highest level,” said Nicolas Gonda and Sarah Green.

Said Sophisticated’s Sophokles Tasioulis: “I am extremely pleased to welcome IMAX and Broad Green to VOYAGE OF TIME. In the past 12 months we have been working hard to secure the best imaginable set-up for Terry. With IMAX we give VOYAGE the perfect stage for the epic scale and ambition of the project and with Broad Green we bring on one of the most dynamic new powerhouses of the film industry.”

The deal was negotiated with the legal support of Stefan Luetje of Olswang Germany LLP, Alan Sacks at Frankfurt Kurnit and Christopher Tricarico, EVP of Business Affairs at Broad Green.