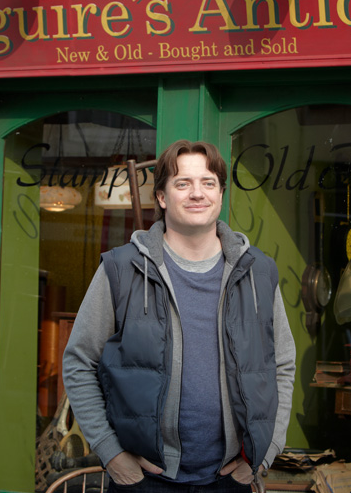 There’s a whole lotta plot in the latest feature film from this year’s Oscar-winner Terry George. The Hotel Rwanda director is tackling lighter material with Whole Lotta Sole, an Irish mob hostage movie starring the ever-amiable Brendan Fraser. For such a simple conceit, subplots upon subplots abound to make this relatively well-paced and enjoyable lark strain in its third act.

Fraser plays Maguire, a U.S. resident looking to restart his life in Belfast, Ireland after his physically-abusive wife, who has Irish mob ties in Boston, might have set a hit out for him. While that plot seems like it could be a film all unto its own, it is covered within the first minute of the film. Back to Belfast, there’s a new father named Jimbo (The Pacific‘s Martin McCann), who owes crime boss Mad Dog Flynn (David O’Hara, not straying far from his gruff The Departed and Contraband roles) a hefty sum. If he doesn’t pay up, he’ll take his baby, as Mad Dog’s girlfriend would like a child and this mafia man only shoots blanks. Then we’ve got police detective Weller (Colm Meaney) and his son Randy (Michael Legge), who is also part of the force, but relegated to social worker status for a group of Snatch-like pikies. Jimbo decides to rob the local fish market which goes by the aptly-named Whole Lotta Sole. Things turn messy when he uncovers something bigger than he imagined. Running from the police, he heads to an antique shop managed by Maguire,  temporarily taking it over for his brother the owner, who is overseas doing charity work. And then there is Maguire’s love interest Sophie (Yaya DaCosta), who is involved in all these shenanigans, which escalates into an all-government hostage situation.

George doesn’t do a poor job of balancing all these plotlines, and while they’re never as entertaining as something like the aforementioned Guy Ritchie gangster film, his experience behind the camera makes for lively labyrinth of criminal activity. As the hostage situation begins, Maguire is immediately mistaken for the one in charge of the proceedings, an odd moment where he could have easily told Detective Weller the truth. Written by George and Thomas Gallagher, the film is unfortunately scattered with these inexplicable happenstance occurrences, breaking realistic bounds only to keep the story moving. But thankfully it does, as O’Hara continues to be a menacing presence as the antagonist. While Fraser is hard to buy as a tortured soul trying to overcome his pending divorce and charming his new lady friend, the focus is mostly kept on Jimbo and his desire to get the necessary cash and save his baby. As someone caught up with gambling, one wishes his character had more development on the family side, with his wife given barely any screentime. We all know any parent should be willing to give up everything for their child, but it’s never completely conveyed here.

As the third act approaches, George is left scrambling to tie up the many plot threads he’s unraveled. Instead, he mistakenly adds some, one of them an extremely odd inclusion of a pikey mom being romantically invested in the lead detective’s son, as well as an inclination said son may be homosexual. For an already packed but strangely slim movie (running about 89 minutes), it’s stuff that could have easily be left on the cutting room floor. Though no one plot line gets the attention required to invest in the characters involved, George leaves nothing to ambiguity, as everything gets wrapped up into a tight bow. This makes for some rushed third act moments, which could have had much more of an impact if we were given a more layered film. Whole Lotta Sole is a fine enough way to pass the time, but an unmistakeably minor effort from this acclaimed director.