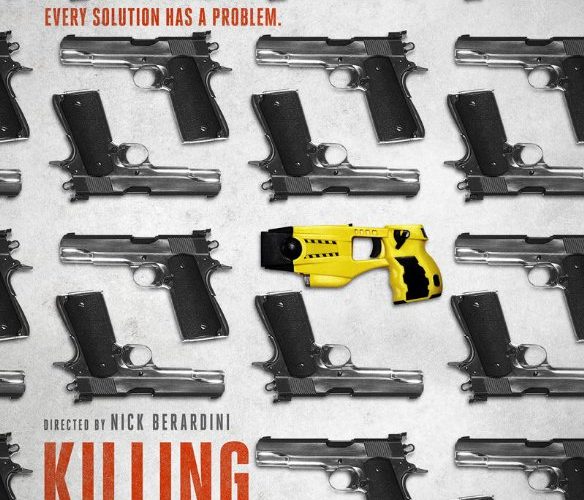 Killing Them Safely is, above all, an example of excellent, ethical, fair, and balanced journalism allowing both sides to state their case. What emerges in its later passages, after the arc of its first act, is a criticism of policing that I believe to be fair: bad policing, including laziness, poor communication and training, a lack of maturity, and a reliance upon tools without further study, kills. The Taser is simply one tool and one that may be too often deployed not as an alternative to deadly force, but as an alternative to deescalation.

I suspect in light of recent reports on the culture of policing, one that is difficult to obtain specific data particularly around the question of use of force, we will see more a flood of documentary filmmakers tackle the subject. The problem with specific cultures that require a certain kind of knowledge to operate – or one that can often operate like a secretive cult – is gaining access to a certain perspective. As we saw journalists arrested while searching for answers in Ferguson, the kind of filmmaker that we need now more than ever is Nick Broomfield. If he could ambush Suge Knight and Sara Palin, I imagine he won’t think twice about approaching Daniel Pantaleo, Darren Wilson or Michael Slager.

Data on the use of lethal force varies by jurisdiction — including reasonable kills in gun fights to mishaps where a taser is used as a compliance device — and is sketchy at best, making Nick Berardini’s picture all the moral vital. Extending his reporting beyond the race and economic lines in the United States he heads to Vancouver, BC where the Braidwood Inquiry has looked further into Taser International’s research in the wake of a deadly incident, where reliance on the taser lead to the death of a misunderstood Polish immigrant Robert Dziekanski. Killing Them Safely lays out both sides of the argument via its thorough research, using archival materials and talking head interviews. When Rick and Tom Swift, founders of Taser International, are called to answer for the deaths, it’s alarming the response has been to defect blame to the parties that had been tasered.

While the Smiths claim their product is safe — although we learn from lawyers it is not FDA approved — its application is perhaps the most problematic as we learn the heartbreaking case of Stanley Harlan, who was tasered for not following contradictory orders given by multiple officers. Officers in this event were trained via Taser International and not a third party, yet had no basic medical training in the wake of an adverse reaction in order to administer any kind of aid or look for the warning signs, leading to Harlan’s death minutes later. While Berardini and his team offer some emotional appeals throughout the picture, the film’s use of public source materials cut through the red tape of departments who would rather not go on camera.

However, we do hear from the Warren, MI police department, which was not indemnified by Taser International following the death of a teenager. While its unclear if the Moberly, MO police department, responsible for Harlan’s death, were approached for an interview, the film underscores the importance of good, fair journalism on the subject of police force in the United States. While Berardini’s interviewees do include lawyers who have taken Taser on via various medical theories, he also gives time to Taser International, who claim their product has saved lives. The economic interest is clear as Taser is now offering a whole suite of complimentary products. Through company spokesman Steve Tuttle, the filmmakers allow their perspective to be heard and in doing so, he touts early victories while Berardini supplements Tuttle’s commentary with some product history.

Well-constructed and riveting, Killing Them Safely is an essential documentary for municipalities of any size. While other documentary filmmakers may take a broader view of law enforcement issues due to the availability of dash cam videos, laws that protect members of the community taping police encounters (formerly considered a crime in some jurisdictions) and access to information via social media, Killing Them Safely is mature, thoughtful filmmaking that, like the best social issue documentaries, provoke discussion about the general culture of policing and the tools we allow them to use on our citizens.

Killing Them Safely premiered at the 2015 Tribeca Film Festival and opens on November 27th.