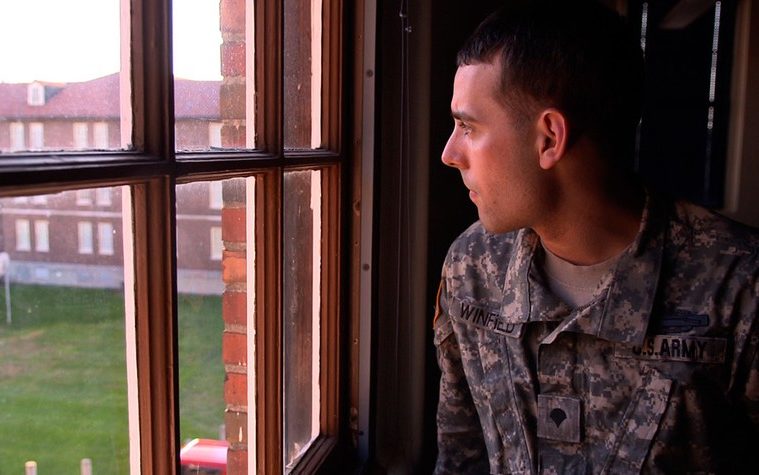 It may be solely within the wide, malleable spectrum of cinematic taste that we ever encounter this unified set: that which we enjoy, that which we do not, and that which we, regardless, must confront. To merge one into the others — by that token, combining seemingly disparate forms of personal taste and approach into a coherent unit — is a task that carries with it a degree of difficulty few bother to attempt, and one fewer succeed at when trying. Lose grip of just one edge, and the whole enterprise can collapse at any given moment.

Had he only assembled these three into a functioning whole, director Dan Krauss could be said to have a certified accomplishment in his war documentary, The Kill Team, needing little else to own a title of even some merit. Yet what comes of the effort, in full, is better: a glance at the dark side which understands man’s need to not merely protect, but justify means to that end — opting not for the harsh truth of document, but using what exists of it to explore the boundaries between fact and assertion, finally concluding that all human sense is susceptible to malfeasance in the fog of combat. For portraying without condescending and probing without draining, this is a work that stands as a unique achievement by complex design. The Kill Team’s subject is brutal enough to warrant discussion in the first place, onscreen or off: in late 2009 / early 2010, a group of U.S. soldiers stationed in Afghanistan formed what the media would, later, call a “kill team,” the term denoting those who treated innocent Afghani civilians as creatures to be hunted with ease and, more importantly, minus any true consequences. Krauss speaks to most of this small assemblage — save for the party’s coordinator, a figure whose lack of input only comes to obscure some central truth even further — but is not present himself, supplanting the role of interrogator with he who presents the reality of what, as we learn, words will never convey to the full extent of honesty.

That his subjects come across as smart, well-groomed, respectful-to-the-point-of-affable individuals makes their actions, stories, and our view of such a more complex matter than the moral starkness would typically allow; that it stands as compulsively thrilling (to the point of entertaining) opens a new avenue of questions on the role documentaries have as educational tools. Quandaries though this may raise, the effect itself is easily attributable: Krauss has a skill for formal manipulation, walking a fine line between the objective stance of images and an accused party’s own explanations, never bothering to highlight what stands as a confession and what marks a personal justification. Instigated by the record is a straight-down-the-line set of questions, the small group of subjects neither belittled nor psychologically simplified by being cast under harsh light; Krauss wants to be told the story of “why” as much as he wants us, the audience, to see the aftermath of “what,” wisely reserving varying levels of potential judgement for those who truly wish to dole it out. One needn’t be surprised, then, that a collective portrayal of mutual implication eventually finds itself juxtaposed with an attempt at main narrative, in totality giving The Kill Team a center which feels, if not truly moving, nevertheless oddly slack. This is not due to some paucity of sympathy for the specific man — as it so happens, no doubt can really exist as to why he, above all others, was given a spotlight — or wholly misplaced sense of purpose in examining personal impact. The series of events rings hollow, instead, because it puts too fine a point on that which operated with selectively small viewer-to-subject relationships. What was once disturbing in its unspoken possibilities is subsumed into the unexpectedly familiar with further light; in essence, a drama of the broken few becomes a drama, too, of those on “the outside,” who simply will not understand for themselves.

These arguments notwithstanding, problems with structure happen to make way for an argument that The Kill Team must be seen, discussed, and used: both as a tool for helping tackle issues that so many, out of fear or duty, never acknowledge, and, in its strengths, a work of cinema which dives into war unlike any recent compatriots.