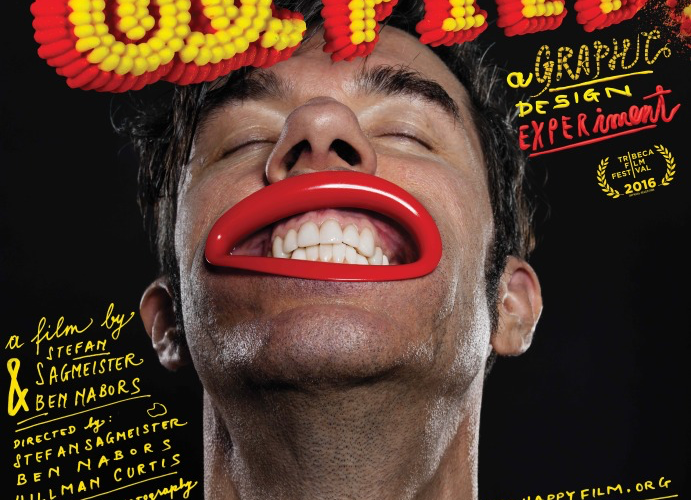 So it turns out the key to happiness is Zoloft and a gorgeous women 20 years your senior. At least that’s the message in Stefan Sagmeister and Ben Nabors‘ The Happy Film, a quest to, among other things, approach happiness as a design problem. This wouldn’t include designing objects that, in everyday practice, make one happy or expand upon one’s happiness. Largely, the design proposed by Sagmeister is the expression of happiness — which occasionally involves bouncing around the word “happiness,” formed in gelatin and capturing this in slow motion.

While an opening inter-title warns that The Happy Film will not make you happy, it should also come with a warning that what’s to come is a self-indulgent bore as Sagmeister challenges himself to discover happiness through meditation, counseling, and (legal) drugs. Based in New York City, Sagmeiser is best known for his innovative album covers for The Rolling Stones, Jay-Z, and Talking Heads. The film finds him first on sabbatical in Bali creating personal design projects, including chairs. Returning home to New York Cit,y he’s asked what’s next. Nursing a recent break-up, he begins the journey to conceptualize “happiness” as a design project and himself as a citizen journalist in the mix. Unfortunately, Sagmeister lacks the charms and wit of other filmmakers that directly insert themselves into their experiments, such as Morgan Spurlock and Nina Davenport.

Amongst his challenges is standing on a New York street corner trying to stop women to engage them in a conversation, a sequence that’s a bit creepy. The expression of happiness is an abstract concept that’s surely expressed in the graphic design of theme park brochures and car ads, but what does it mean? How is it conceptualized and expressed? The performative range includes highly aestheticized moments, but perhaps the film might have been more effective as an Art21-style behind-the-scenes look at an exhibition that encourages viewers to engage with the abstract notion of happiness, ultimately asking them to select a gum ball from a two story-high clear machine on a scale of 1 to 10 for how happy they are. (Most fall in the mid-range.)

The film’s disjointed nature could perhaps result from the fact that it started as an experimental hybrid and grew into a seven-year mess due to factors that are disclosed within the film: Sagmeister’s original collaborator for this project, documentary filmmaker Hillman Curtis, passed away mid-production in 2012. Ben Nabors boarded the project at an undetermined time and documents several changes in Sagemeister’s life, from falling in love with a younger woman to falling in professional love with rock star graphic designer Jessica Walsh, who becomes a partner in his former solo practice. Among the valuable lessons learned here are that no man is an island and a chemical high is not a permeant path to happiness. (The film forgoes a critique of big pharma, however.) The lessons Sagmeister learns about himself might have been more interesting and engaging in 20 minutes rather than 95, as the film simultaneously offers us too much information while lacking real heart.

The Happy Film premiered at the Tribeca Film Festival.