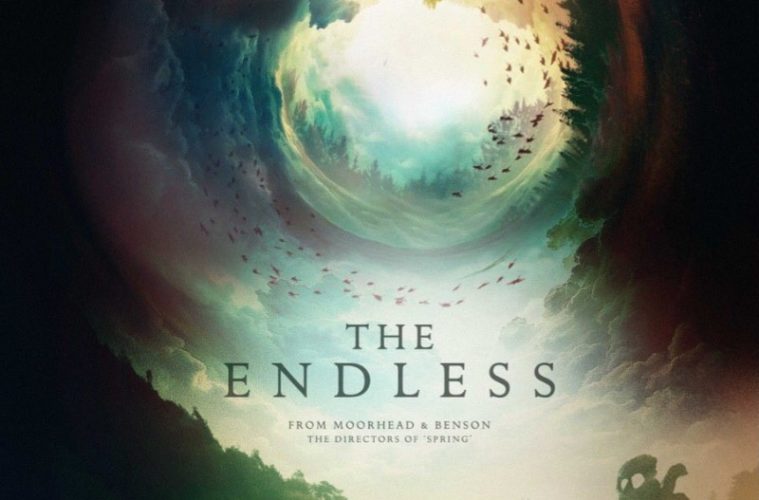 Tribeca Review: ‘The Endless’ is an Intuitive, Genre-Bending Thriller

To resolve is to settle, finding the determination to do something rather than simply wait for something to happen to you. A resolution isn’t therefore a firm ending. On the contrary, it serves to provide beginnings. That decision has the potential to set you onto a path towards freedom either from the danger of outside forces or the complacency rendering you immobile within. So to look upon the conclusion of Aaron Moorhead and Justin Benson’s debut feature (as a tandem) isn’t to relinquish hope. The being — their riff on H.P. Lovecraft’s “Unknown” — that watches the events in Resolution does want stories, that is true. It craves them enough to ensure its characters arrive in time for their test. To assume it seeks tragedy, however, is to ignore complexity. Perhaps it’s those characters brought into this mysterious forest of media (cassettes, vinyl, hard drives, film, and photos), Native Americans, UFO cult members, and unexplainable disappearances that seek it instead. Maybe the “Unknown” knows this truth so well that it yearns to supply the cliff with which they must jump. Saddled by the struggles of life, love, and work, we all need a definitive moment to awaken from the doldrums of false security and search for a means towards self-improvement. To settle isn’t living. To endure is merely to prolong an inevitability that isn’t set in stone except by our own fear of discovering the other side of the fence is worse rather than better. Resolutions are chapter breaks along a continuous journey. When one concludes another commences.

It’s therefore fitting that Moorhead and Benson would so quickly return to that forest in their latest genre-bending thriller The Endless. What might be surprising, however, is how they do it. You don’t need to have seen Resolution to enjoy what this new film offers, but it does enrich the experience ten-fold because of the expansion of mythology that’s presented through two minor characters originally dismissed as brief comic relief. I’m speaking of the innocently baby faced directors themselves as members of the aforementioned cult, both dressed in white and spewing pamphlet rhetoric about cosmic children and a forthcoming ascension. You see, shortly after Mike Danube crossed their path (and even shorter after online figure Jesse Summoner shared a dinner with them), Justin and Aaron fled the commune.

The Endless picks up ten years later, the Smith brothers now aged and barely scraping by in the real world. Fate notices their struggle — Aaron’s dissolution and Justin’s frustration — by revealing a package from an old friend. Anna (Callie Hernandez) has sent a video declaring the cult’s ascension arrives. It’s explains their journey as one taken under their own volition and that they’re communicating to let Justin and Aaron know they’ll be back soon if they happen to decide to visit. The tape obviously hits these two like a ton of bricks, remnants of a past they publicly denounced to the press by exposing damning details upon their escape. Justin is glad they haven’t “drunk the Kool-Aid” but unwavering in his stance for separation. Aaron itches to return. The former’s cynic attempts to talk sense into his baby brother, but the latter’s desire to go back and at least remember what it’s like to eat whole food instead of ramen remains steadfast. Justin agrees on one condition: they spend one day and one night only. He remembers what came with that healthy food. He remembers the lunacy of ritual castration, serving a fictitious astral God, and being brainwashed. Returning is therefore a means to an end, a way for Aaron to refresh his memory and decide to leave on his own. It won’t prove so easy, though, because everything looks the same (besides the dress code). And I mean literally the same. Anna is supposedly twenty years older then them and yet she looks their age.

So what’s actually happening here? What does any of this have to do with the events from Resolution (besides mention of a crazy meth-head shooting guns)? I’ll leave those answers to Moorhead and Benson’s rather intuitive plot progression gradually revealing unexplained phenomena and callbacks at every turn. Whether it’s magic tricks, ropes suspended in the sky, double moons, or tents housing men who appear caught in a time loop, this forest is obviously not of our world. Cult leader (but not leader) Hal (Tate Ellington) tries to dismiss things outright or chalk them up to metaphoric ramblings meant to set Justin and Aaron on a trek of self-discovery, but that only works so well when dealing with outsiders not fully cognizant of what it truly meant to leave.

There are characters introduced that mean more in their presence than actions and some the reverse. We don’t recognize the man forever running away (James Jordan), but those who dug through the trail of breadcrumbs the filmmakers left in 2010 via Twitter and WordPress should recognize his name. A blonde woman (Emily Montague) seen smoking in the distance doesn’t need to talk for us to know her identity and why she’s here. And some who’re completely new to the series (Lew Temple’s Tim) carry a sense of importance shrouded by a stoic mask we know can barely stay intact. The events surrounding this reunion and the constant appearance of freshly taken, impossible imagery possess a concrete origin point and we’ll soon be made to understand what it is. But the supernatural, science fiction, and comedic aspects aren’t the ends, just the means. They allow Moorhead and Benson (the latter once again credited as screenwriter) to take their micro-scale scenario and enlarge it on a macro level in order to expose human truths via their impact. The Endless isn’t about the device being used as much as the evolution of the characters caught within its machinations — much like their brilliant film Spring before it. The high-concept structure (that itself is often dismissed by Hal and Anna as out of their grasp) positions Justin and Aaron to discover what it is they want. It forces them to weigh the outside world against the cult, two disparate venues made achingly similar as prisons due to the choices they’ve made.

Suddenly Resolution‘s dialogue “You need to be out in five days” or “You should leave now” make sense as warnings, not threats. We’re watching a straightforward sequel serving as a skeleton key to decipher its predecessor through re-contextualization while also providing a unique story removed from it. There are as many layers to its effectiveness on both those levels as there are genre tropes rendering it impossible to classify into a ready-made box. And Moorhead and Benson do it while putting themselves (hardly seasoned acting veterans) in front of the camera to let the situation impact them as naturally as it does us. They show what it means to have free will in a world regulated by destiny — individuality beholden to nobody (God, parent, or sibling) but you.

The Endless premiered at the Tribeca Film Festival and opens on April 6.