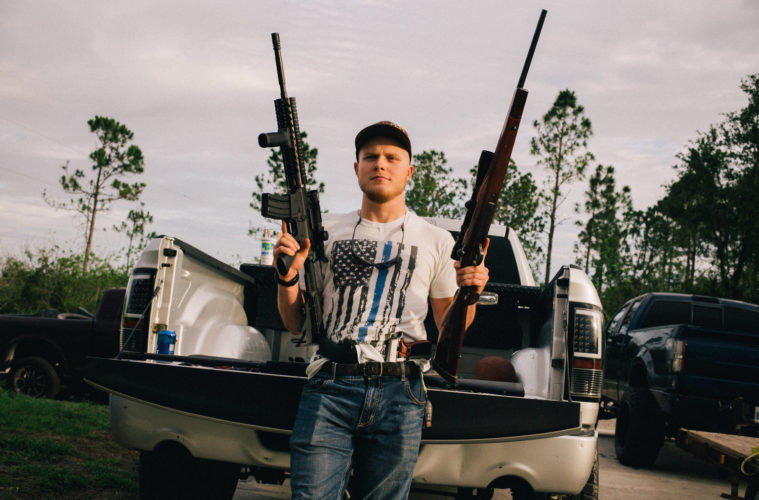 Beyond Cinderella’s castle and Universal’s Islands of Adventure is the long-forgotten Redneck Orlando. I use the term because the family at the center of Red, White & Wasted proudly calls themselves rednecks. They simply want to be left alone to take their trucks out to a mud pit on a glorious afternoon, have a few beers, and cut loose. As seen in The Florida Project, the interests of tourism rather than political correctness have threatened this way of life for Matthew Berns (aka Video Pat), an amateur videographer raising his adult daughters in Central Florida.

His daughters grown concerned about Berns, who has become increasingly closed off since the closure of Swamp Ghost, a local mud hole that’s been shut down since a brush fire. That fire, along with several other unfortunately and deadly incidents, has led to increased enforcement of trespassing orders. For Berns it was also a revenue stream as he made and sold videos of monster trucks hitting the mud along with some Girls Gone Wild-style antics that seem quaint compared to where the culture has since migrated. The film follows a last ditch attempt as Berns treks to Redneck Yacht Club, a corporate mud hole filled with pricy monster trucks, hard drinking, and plenty of twerking–think of it as Electric Daisy Carnival with Confederate flags by night. For the middle-aged Berns, it’s maybe too much.

Directed by Andrei Bowden-Schwartz and Sam B. Jones–who reside in Brooklyn, per Tribeca’s programing notes–Red, White & Wasted is a frank look at the kind of forgotten people that Trump spoke directly to in his election and they certainly repay the love. Daughters Krista and Jessi embrace the redneck culture along with Krista’s former boyfriend, who provides the kind of politically incorrect dissertation on race that is as insightful as it is will be horrific for those on the other end–or middle–of the political spectrum. Red, White & Wasted allows this realistically libertarian family and their friends to speak for themselves on a variety of topics, including race relations, immigration, the environment, and freedom of choice.

Films like this provide the ultimate kind of test for viewers that don’t subscribe to the viewpoints presented. Ultimately, however, Video Pat is a compelling character who cares about his family even if he allows the hard-partying Jessi to spin out of control and make a terrible life decision, moving in with a boyfriend with no prospects while Krista finds herself pregnant at the hands of a dangerous guy.

Red, White & Wasted explores the same ground Roberto Minervini’s intoxicating and disturbing The Other Side mined, focusing on the story of a southern community hit hard by cultural changes. While that picture largely focused on the images, this one focuses largely on character, creating a portrait of an American family glued together by common struggles. To their credit, Bowden-Schwartz and Jones have have not added an extreme aesthetic to evocative images like those found at the Redneck Yacht Club, but rather this is a muddy and honest portrait even if its not entirely an effective or polished one. The arc of the story feels a bit rushed as it darts between past and present, focused around a journey that is incomplete. Perhaps with a few more weeks or even another year, Berns’ story might have grown into something slightly more compelling as he transition into his new role as a grandfather and provider on a dwindling income.