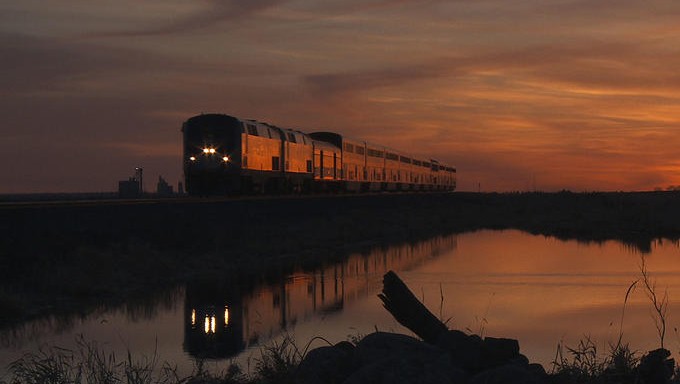 Ripe with rich source material each worthy of their own feature films, In Transit provides a glance into various lives and narratives. Some intersect and interact with each other, if only for a brief moment, others are singular: they opt to tell their story to us directly as we share an aural overview of a whole life, relationships, connections, missed opportunities and narratives yet to be written, each in transit. The final film by master vérité filmmaker Albert Maysles, the filmmaker and team (including co-directors Lynn True, Nelson Walker, David Usui, and Ben Wu) spend a few days aboard the Empire Builder, Amtrak’s long-distance line carrying passengers from the Midwest to the Northwest en route to Portland.

Documentaries such as these, chronicling anonymous everyday lives in extraordinary situations, are immense, yet carefully edited in a concise 76 minutes, at no time does a passage overstay its welcome. Whole conversations, including a young black man sitting with an elder who knew Martian Luther King, are chillingly powerful and relevant. A 10-minute conversation can change one’s life and as seen here on the Empire Builder those kinds of interactions along its three-day journey are possible.

Other lives captured on board include oil workers, notably a young man who aspires to work hard, save his money and retire early and college students heading back to campus. Some lives contain humor, some contain profound heartbreak, each willing to speak frankly to Maysles. In return, he listens, often to people whom we sense are amongst the overlooked in society, including two young mothers: one overdue, the other with four children who admits she has made mistakes in life.

Beautifully lensed, the film recalls Thomas Hellum’s TED talk on slow television: while the focus isn’t entirely on landscapes and history (although there is some commentary from a photographer on board), In Transit is the kind of experience to sink into and allow it to wash over you. Masterfully crafted, personal and engaging, many of these stories strike a deep emotional cord as each passenger is on a journey of their own.

Also of interest are the logistical challenges presented in Amtrak meetings once trains have stopped. While some crewmembers share their stories in passing, we are given insight into a meeting where they refresh procedures regarding the overdue pregnant women.

Amongst the film’s darker passages are moments where some of the men, we presume on-the-ground workers in the oil trade, have one too many drinks. Thankfully someone (we’re not privy if they are a friend or a new friend made on the train) intervenes before a drunken phone call is prematurely made. Delightful at times and always insightful, In Transit contains a range of emotions and characters rarely seen, even in the best of narrative cinema. As a final picture it’s a fitting one for the legacy of the brothers Maysles, whose vérité work will continue to influence and inspire documentary and narrative filmmakers.

In Transit premiered at the 2015 Tribeca Film Festival and opens at Metrograph on June 23, 2017.