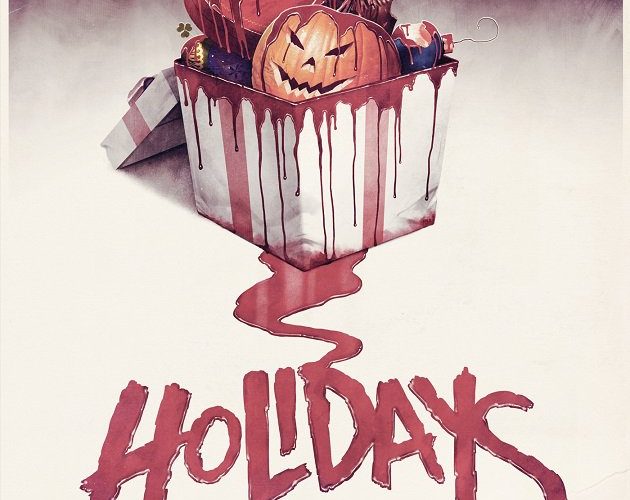 The vignettes, which are presented in order of the calendar year, open with Valentine’s Day, a story about a high school outcast, her alpha bitch tormentor, and a swim coach with a bad heart. The work from Starry Eyes duo Kevin Kölsch and Dennis Widmyer screams retro with its synth-y soundtrack and teen-centric drama, doing its very best to recall early Brian De Palma. (If the connection to Carrie wasn’t evident enough, there’s a girl wearing a red baseball cap à la PJ Soles to remind you.)

More disturbing high jinx abound in the following short St. Patrick’s Day, an Irish export from director Gary Shore (Dracula Untold) about a schoolteacher impregnated with a snake by a creepy pagan imp. The bizarre spin on Rosemary’s Baby is made all the more weird by feverish shock cuts and a delightfully zany ending. Of all the entries, this one really goes for it.

At number three is Nicholas McCarthy‘s nightmare about a little girl visited by a truly horrific Easter bunny-resurrected Jesus hybrid. Thoroughly detailed and well-executed, the short’s biggest reward is its creature design, which re-imagines the beloved fluffy buck as a fleshy, rubbery man-beast whose long ears are held down by a crown of thorns.

The fright continues with Sarah Adina Smith‘s trippy pregnancy cult thriller Mother’s Day and Anthony Scott Burns‘s haunting, dreamlike Father’s Day. Scott Stewart and Adam Egypt Mortimer provide some nice twists in their yuletide contributions, with Stewart pitting a father (Seth Green) against his son’s Christmas present, an all-knowing virtual reality headset, and Mortimer ringing in the New Year with a karmic tale about an unassuming psychopath who meets his match after stalking a woman online.

While each entry satisfies in its own unique way, the anthology as a whole makes for an impressive examination of distaff fears and underestimated ferocity. To that end, Holidays proves horror has, and always will belong to women, as the genre’s best stories focus on female protagonists serving various roles.

Then there’s Halloween. From the first line of expletive-laden dialogue, delivered poorly by a character wearing a t-shirt emblazoned with the term “Pussy Haver,” it’s clear the film has Kevin Smith‘s dirty, Cheeto-dusted fingerprints all over it. The comedic misstep about three web cam girls who take revenge on their low-rent pimp is ugly, unfunny torture porn presented with all the elegance of a crusty sweat sock to the face – that one of the girls is portrayed by Smith’s very untalented daughter Harley Quinn Smith makes the experience all the more embarrassing. Compared to the other vignettes, which strive for some degree of formal or conceptual cleverness, Smith’s contribution is a skidmark in this otherwise virtually unblemished collection.

Holidays premiered at Tribeca 2016 and is now streaming on VOD and will hit theaters on April 22nd.