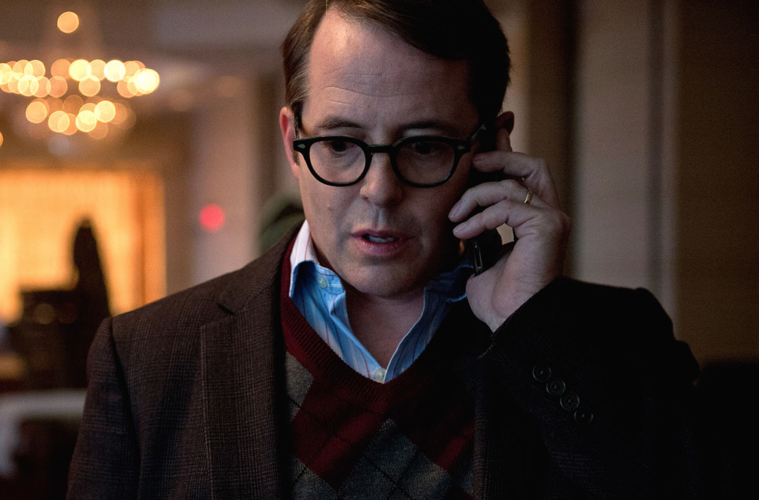 Returning again to the scope of his previous dialogue-driven films, Neil LaBute’s Dirty Weekend is a playful buddy comedy with notes of Neil Simon – and a little 50 Shades of Grey. Like LaBute’s previous outing, Some Velvet Morning, Dirty Weekend is a difficult movie to discuss without revealing spoilers as our leads Les (Matthew Broderick) and Natalie (Alice Eve) continue to reveal layers and levels as the narrative progresses. Neither is what they appear to be and that is to be expected in vintage Neil LaBute. Warning, we may spoil surprises along the way in this review.

Kinder and gentler than his uncompromisingly cruel debut In The Company of Men and his second feature Your Friends and Neighbors his later works, Dirty Weekend and Some Velvet Morning unfortunately appear tame. Despite the frankness in its sexual politics, the freshness of the taboos explored seem rather dated. Dirty Weekend could be read as a softening of LaBute as this is the trajectory of some bold indie filmmakers: while they break ground early on exploring taboos, once those taboos become acceptable as mainstream, their work seems quite safe. His latest features restrained performances with a minimalist aesthetic that mostly takes place in hotel lounges, restaurants, airports and taxi cabs.

Similar to In The Company Men, we have another business trip that doesn’t go as planned. Colleagues Les and Natalie are forced to make an emergency landing in Albuquerque in route to an importance presentation in Dallas. Broderick is perfectly cast as a neurotic WASP with his arm in a sling post surgery while Eve plays a submissive women with a secret of her own. Both bring a kind of easy platonic working relationship to the material that seems realistic in an otherwise unrealistic scenario. Lighter touches include running gags exploring just how small a town it is, or at least that of its central business core. They keep running into the same shuttle and taxi drivers who quietly judge and/or attempt to understand the duo.

Attempting to break away from the corporate hotel they find themselves, Natalie insists on following Les into town as he goes in search of souvenirs for his kids and, truth be told, for himself as he navigates a sexual identity crisis. Natalie remains supportive on this mission even as Les seeks to keep the purpose of things on the down low. As a faithful and curious friend and co-worker she thinks of them as Butch Cassidy & the Sundance Kid, often reminding him she’s there to protect the integrity of the ampersand.

Individual scenes don’t quite stand on their own as Dirty Weekend aims to escape the stage form LaBute is best know for. While it’s a great deal more open than his Shape of Things, certain exposition need not be relayed in dialogue — for instance, the film’s opening scene painfully spells its setting out for us in the way it might reveal itself on stage. The secrets do come and the film is not without unique insights even if LaBute has gotten a little kinder and a little gentler in his exploration of sexual politics and ironies.