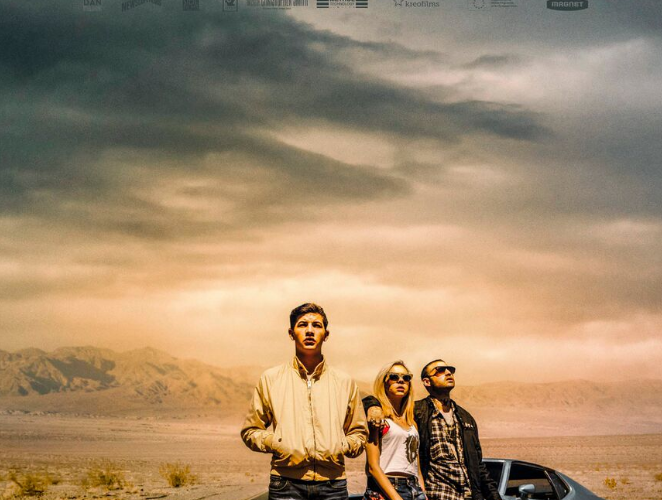 A gleeful throwback to a genre that unfortunately jumped the shark years ago, Detour harkens back to the ’90s noir that ultimately met its death with one too many Quentin Tarantino knock-offs. Detour is not that. It’s instead a playful shape-shifter (using a split-screen device) that offers a slight element of misdirection to its wild, winding road of unexpected encounters, moral decisions, and a portrait of white-trash Americana. This is lurid film noir at its best.

Thrust into this world is law student Harper (Tye Sheridan), a nice rich kid whose mother lies on her deathbed. He theorizes that his stepfather, Vincent (Stephen Moyer), is responsible for a car crash that’s left her on life support. He’s an architect who frequently travels from California to Vegas “for work” and first devises a plan to get him busted at the airport. In a moment of desperation, he shoots a video to prove Vincent forged his mother’s will.

In the spirit of another modern throwback, Mississippi Grind, Harper runs into Jonny Ray (Emory Cohen), low-level drug dealer and all-around sleaze, in a dive bar. Instead of beating each other to death, they take a bottle and walk around the corner to the local strip club, where Jonny offers Harper his services: $20,000 to head to Vegas to kill his step-dad, no questions asked. Tagging along for the road trip is Cherry (Bel Powley), a stripper who’s frequently used as bait to rob the prospective Johns they pick up in casinos. She proves to be useful as a Bonnie to his Clyde when required, and a bargaining chip when Ray accidentally screws over Frank (John Lynch), a high-level drug dealer.

Infused with character and atmosphere, Detour plays like a nightmare. Best experienced cold, the film never fails to surprise as it picks characters apart layer by layer. While some of this may seem far-fetched (you’ll know which passage I’m talking about) in the modern era of smart phones that offer GPS beacons as a standard feature, the character development and situations are often so engaging that director Christopher Smith forces you along for the ride.

Repurposed and repacked from noir tropes you’ve seen elsewhere, Smith masterfully infuses new life into the mess by keeping us guessing in a structure that, upon first glance, seems like Sliding Doors, as if Harper has stepped out of character for one crazy mission. Normally, films such as this would lose themselves in the third act, and this one indeed turns a shade predictable, yet still delivers the goods.

An effective noir thriller, it delivers the occasional white-knuckle moment as its leads, largely playing against type, mostly disappear into these roles. Detour is the kind of effective and gleefully trashy noir that would fit right at home somewhere between Wild Things, Red Rock West, and The Salton Sea.

Detour premiered at the Tribeca Film Festival and opens on January 20.