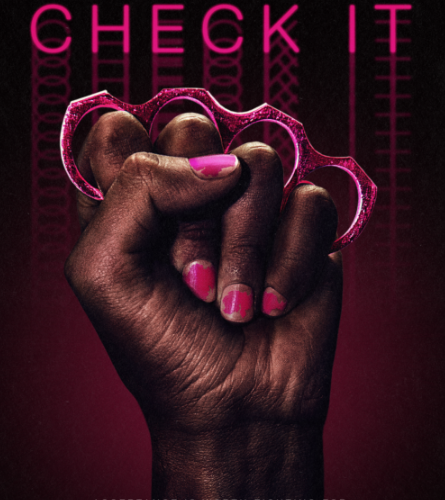 The Check It, like many other gangs, arrived out of necessity to protect their own. In the case of the Washington, D.C.-based gang which counts over 250 members, the group protects gay and transgendered youth as they struggle to make ends meet. The film chronicles a diverse cross section of Check It members as many come from the usual backgrounds: broken homes, absentee parents, homelessness, and dead-end schools — problems compounded in the community by their sexuality.

An alarming film by Dana Flor and Toby Oppenheimer, they fearlessly engage with Check It members past and present. Some are working to build a better life, others are with bleaker prospects, including those that walk K-Street, a prostitution hub only two miles from the White House. These passages are told in frank detail as the young women have virtually no safety net — missing in these scenes is an adult staging an intervention. The time the film spends on K-Street recalls David Schisgall’s Very Young Girls, a startling documentary about Rachel Lloyd, a former sex worker who intervenes in the exploitation of teenage girls. The services for these self-identified women are nonexistent, amplifying the risk of sexual assaults when a patriarchal bureaucracy refuses to take them seriously.

The film introduces us to several narrators including Tray, who is gender fluid and interested in fashion and design. He finds a mentor in Jarmal Harris, who runs an after-school fashion camp in the local public campus, providing Check It members a creative outlet. In a bittersweet moment in the film’s third act, the hard work pays off as a lucky group is treated to an opportunity that would have been otherwise impossible to achieve.

Equally as colorful is Skittles, a masculine young man with hell of a lot of energy. A trainer named Duke takes notice and focuses his energy towards the boxing ring. Skittles and Duke unfortunately do not have quite the same path as Rocky and Adonis with multiple cultural, financial and personal hurtles to overcome. The material here is rich enough for its own feature, albeit one that would not conform to your basic Hollywood three-act structure.

Check It is a vibrant, energetic and sympathetic portrait of the gang and the heroes that work to intervene (often at the risk of failure). The voice of filmmakers Flor and Oppenheimer is kept entirely off-camera even during rather difficult moments including street fights, police inquiries and illegal activities. Some passages border upon frustrating as the tone of each “scene” can change without notice — depending on who has beef with who and why — constantly keeping us and the filmmakers on their toes. Certain histories may not be understood and there’s a degree of anonymity provided to many of the film’s subjects by the filmmakers as they strike a balance between a complete ethnography and privacy for the sake of the future prospects of those captured on camera.

Approaching this material from a unique socio-economic, gender, and sexual perspective, Check It offers privileged access into a foreign culture going beyond the sound bites of a 60-second local TV news story. Documenting the socializing of gang members, Check It is a fascinating and comprehensive ethnographic portrait of inner-city youth that may inspire conversation and action without offering easy answers or artificial sentiments.