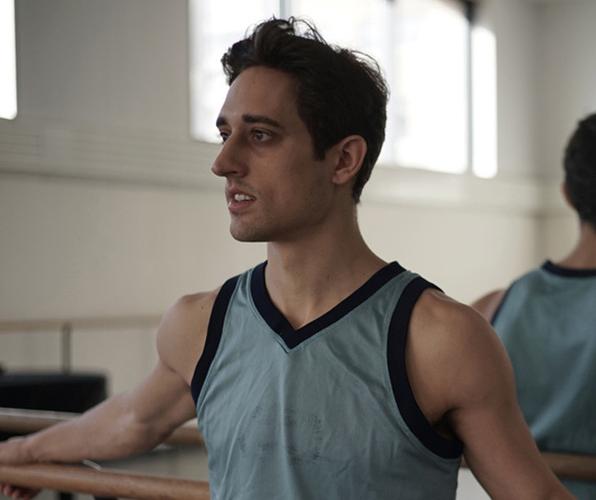 The seemingly endless hard work required to make it as a successful dancer demands tremendous dedication and determination if one is hoping to endure the art form’s many challenges. Each moment must be perfectly attuned to the rhythm of the choreography, the mind of the dancer keenly aware of each movement their body makes, closely paying attention to the minute details. The ultimate goal being that when the moment of performance arrives everything is in perfect synthesis. It is this level of focus that fascinates director and cinematographer Jody Lee Lipes as he aims his lens on a talented young ballet prodigy named Justin Peck.

A member of the prestigious New York City Ballet, the 25-year-old dancer has been commissioned to create an original ballet for their 2013 Winter Season. Noted for his tireless work ethic and acute expertise in doing what he loves makes examining Peck a fascinating character study, despite never really understanding the driving force that pushes the young artist. Instead, Lipes steps back and allows the creative process to blossom before your eyes in a detached cinema verité manner. It’s akin to having a fly on the wall perspective of these dancers, from the first rehearsal moments early on to the insurmountable tension that leads to the curtains rising. In between we see Peck directing his posse of acclaimed young dancers and the environment that surrounds him, from the musicians to the costume designers each adding their own unique creative spark. There is a fantastic unbroken shot of the orchestra conductor immersed in the music flowing through his body, highlighting once again the singular focus that Lipes is honing in on. The process of designing the colorful costumes for Paz de la Jolla, the title of Peck’s piece, requires a flurry of retro summer style from an equally talented young designer. These moments of interaction feel a bit more secondary compared to the visceral experience of watching Peck mold his dancers to perfection but it’s understandable. These scattered scenes are there primarily to show the audience the different aspects that go into making the final product something special.

The film is as much about documenting the creative process as it is documenting the intricacies of ballet. Like the opening shot emerging from the depths of a dark corridor into the bright light of the rehearsal space, there is a sense of illumination throughout. For the first several minutes there is no talking, no music, just the sound of bodies gracefully moving through space. As an audience member one becomes captive to the performance, and Lipes allows his film to simmer into an naturalistic state so that we feel a part of it. It could even be considered similar, though not quite the same, to the work by the Harvard Sensory Ethnography Lab, not far removed from the Leviathan of ballet. Lipes is also in familiar territory considering his previous directorial work includes another film about ballet in the city, the fantastically fluid NY Export: Opus Jazz and a documentary about an artist struggling with the creative process, Brock Enright: Good Times Will Never Be The Same. With its brisk pace and unique style, Ballet 422 is a cinematic gem that encapsulates the passion of two inspired artists, the one in front of the camera and the one behind it.