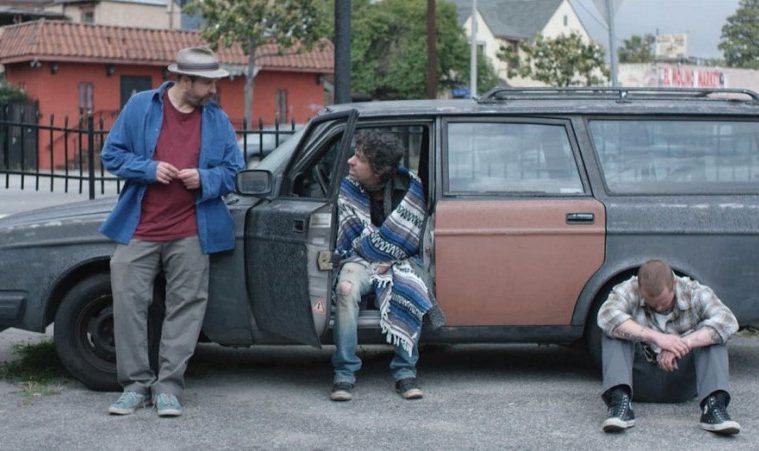 Tribeca Review: ‘A Thousand Junkies’ is a Pitch-Black, Personal Comedy

Punctuated with banter about the best places to score, which gas station bathroom is the best for shooting up, which neighborhoods have cops roaming, where in downtown can one get a bag of coke on a tight budget, and from whom can they steal to score the next fix, Tommy Swerdlow’s pitch-black slice of life A Thousand Junkies is a bleak, yet engaging look at a day in the life of three junkie friends. Simultaneously absurd, playful, and horrific, Trainspotting this is not.

Told as a matter-of-fact buddy comedy, the film is inspired by the real-life struggles of its stars. Director Tommy Swerdlow and co-writer TJ Bowen, along with friend Blake Heron, play Tommy, TJ and Blake, respectively, three guys that met randomly. Tommy is a successful screenwriter who occasionally uses his contacts for “get well,” a term they use to score a fix so that they can function. Heading to set, he encounters Bill Pullman, who offers up sage advice to his friend Tommy.

An occasional non-linear narrative, the story leaps back in time to explain how the three men met, as well as their desires. Tommy and TJ had encountered each other at a halfway house while Blake, a mechanic’s son, meets the crew at random while trying to score a fix at a drug store. They have ambiguous histories together; they may not be old friends, but it sure feels like they are. The trio remember the good times and the bad while attempting to get clean, only to go out and score again during the course of one wild morning, afternoon, and early evening spent driving around Los Angeles swapping favors for leads.

Like teen boys trying to score beer in films like Superbad, albeit with darker stakes, they find obstacles in their path at every turn, from a dealer whose wife goes into labor only to get kicked out of a hospital to Igor, the easily distracted wealthy Russian (this movie’s McLovin), played by Dinette de Freitas, who spends time with the guys for the hell of it until a better offer comes up. He’s simply trying to go downtown to score some coke.

A Thousand Junkies is a grim and fascinating character study that lives and breathes, frustrates and entertains, and very realistically knows what living on the edge is like as Tommy and Blake fight over a gas card nearly at its credit limit deciding what the best of use of a few dollars is. Examining the toll addiction has taken on Tommy’s family (as he’s the lone family man in the trio), he finds himself desperately asking his teenage daughter for a loan to get high before he’s chased away by his ex-wife. The flaw of the drama is that Tommy is given more stakes than the others, while TJ and Blake each have their own ambitions and they are selfless in their endeavor to get high.

The film embodies a statement made by Jerry Stahl, writer of Permanent Midnight: a good friend who is a junkie will do all of your drugs and then spend the day helping you look for them. A Thousand Junkies is not necessarily a morality tale, nor is it pure voyeurism. It’s simply capturing a day in a life — or three, to be more specific. Now that Tommy, TJ, and Blake have been clean and sober for several years, it’s an authentic reflection of a personal war and the men they fought besides who made it less grim.

A Thousand Junkies screened at the Tribeca Film Festival.