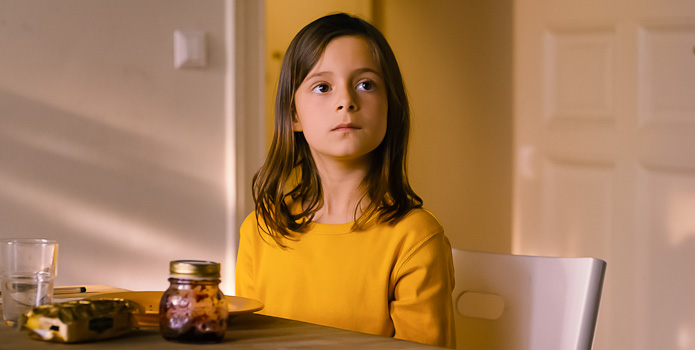 Running a brief 72 minutes, The Strange Little Cat joins the hour-long Viola as 2013’s second feature that will require multiple viewings, but ones which will pass by briskly and pleasurably so. Its aesthetic gambits are at once obvious and yet perplexingly complex, its tone a playful register mixed with sudden moments of melancholy, and its narrative at first shallow, but soon revealed to be densely layered. While some have criticized the Berlin School — the filmmaking movement that has bred terse, methodical directors like Barbara’s Christian Petzold, Everyone Else’s Maren Ade, and In the Shadows’ Thomas Arslan— Ramon Zürcher’s debut feature feels like a bold step towards something much warmer and amiable than any of these noted “contemporaries.” Given the subtlety of its narrative, questions of whether this congeals into something substantial might be up for further debate, but I’m willing to give this unquestionably unique work a very strong benefit of the doubt when the rigor of its filmmaking leads toward so many unexpected pleasures.

What, exactly, The Strange Little Cat articulates is not obvious until one either falls into its rhythms or, on the other hand, is distracted from them; often, the frame itself is closed-off from much of the physical action, only the soundscape suggesting an entire world out of sight. Set almost exclusively in a Berlin apartment (with over half its running time devoted to the very small kitchen), it follows the day of a family preparing for a dinner gathering to be held later that night. The children, Simon and Karin, are home from college; grandma sleeps in one room; and there’s the third child, Clara, herself a precocious, young, and somewhat loud-mouthed sort, first introduced by way of a deafening scream as the garbage disposal rings out with noise. Noise is a key placement for Zürcher’s approach to narrative, with almost every major reverberation staying “off-screen” while rattling around. For such a very contained apartment, Zürcher shoots almost exclusively in one-shots, giving characters Ozu-like spaces of action as he cuts between them. Because the sound is so cacophonous, characters suddenly “appear” out of nowhere; those we thought were alone are, in fact, being intruded upon via Zürcher’s methodical cutting. Each seems at peace within his or her own frame, yet these encompassing sounds preclude any true sense of isolation.

Like last year’s similar world cinema hit, Neighboring Sounds, Zürcher uses noise, itself, as a character that both connects and disassociates. Occasionally, he breaks from the action for small montages set to Thee More Shallows’s “Pulchritude,” which give us intimate close-up on the objects that have been causing this audible chaos: the dropping of orange peels, a plastic bag, a “magic bottle” that appears to spin endlessly, and even the boy outside playing hacky sack.

Where is this all leading? Perhaps the difficulty of A Strange Little Cat is the opposite of Neighboring Sounds — while that film ended up seeming too tidy in its narrative depiction of class tensions, Zürcher’s thematic articulations are harder to place. I was genuinely happy to run with this film on the laurels of cinematic design alone, but found it harder to outright comprehend things: a conversation about a dream of orange peels, or a set of words Clara has misspelled, as well as the mother’s apparent silent distress throughout. There is also the cat of the title. too, a little orange tabby who silently stalks the environment and is known for its magical purr, the purpose of which is revealed in sublime fashion near the picture’s conclusion. In that way, Zürcher certainly follows his Berlin School mentors, as Cat can, on occasion, seem more like an experiment in filmic language than a work to be examined — and, yet, there is something worth following in the traces he leaves us. While part of the film certainly feels indebted to Tati’s comical uses of sound and Bresson’s reserved acting, I found myself more engaged with its parallels to Ozu — not only in the structure of its shots, but also in its thematic patterns. While Cat engages with multiple generations of a family (while including plenty of food), the two also seem tied to spacing as a character. Many passages in films like Early Summer and Tokyo Story use the placement of people in their neatly designed homes as a means of articulating emotional relationships, the filmic conception of which Zürcher takes a step further by surprising us via spatial information delivered through clever edits. We don’t even consider the threat of the sound of a hacky sack outside an apartment until it suddenly intrudes in the space, nor, in one particularly frenzied long take near the end, how a family home can feel as chaotic as the work of Michael Bay. These moments of space and sound slowly form something of a thematic cohesion alongside sonic cohesion, the aural design both an intrusion into these characters’ lives as well as the harmony that connects this family. (Michael Sicinski compares it all to chamber music, describing “the cramped-movement allegros and the digressive-anecdotal adagios.”)

If possible, I would have watched The Strange Little Cat a second time to get a fuller sense of its depths and the sublime construction of its cinematic elements, all of which are so meticulously placed that the film’s relaxed and warm tone almost feels dissonant. Like Matías Piñeiro, Zürcher is working in something of a cinematic playground — one worth exploring simply for the pleasures it creates in new and unique spaces of the medium.

The Strange Little Cat screens at TIFF on September 12 and 13. Watch the trailer above.