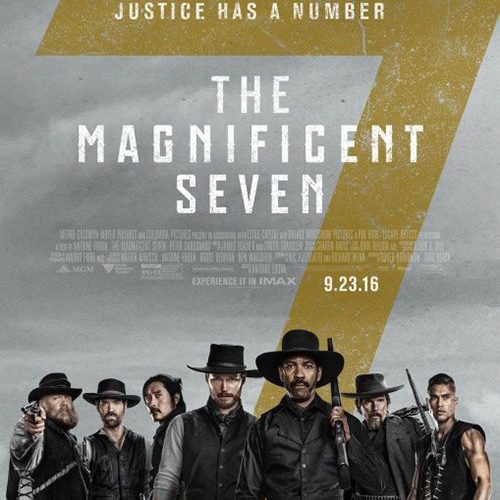 Rather than the 1960 version or the film it was based on, Akira Kurosawa’s Seven Samurai, Antoine Fuqua‘s The Magnificent Seven brought deja vu of the unexpected sort. The score pounds in with a familiar melody, Denzel Washington’s Sam Chisolm is approached by a (not-quite) damsel in distress to come and fight an evil man who’s been terrorizing her small town, and the thing that kept poking me to realize it was there finally hit its target. ¡Three Amigos! Yes, ¡Three Amigos! was a spoof of Seven Samurai and sadly it proved to be the only “western” I ever truly watched until my late teens. I couldn’t help chuckling to myself because separating the two became impossible. But it wasn’t necessarily a fault of the film on the whole as much as it was the further unfortunate proof that directors aren’t able to utilize the newfound star power of Chris Pratt effectively.

I forgave its overwrought prologue wherein the aforementioned damsel (Haley Bennett‘s Emma Cullen) and her neighbors gather together at the local parish to discuss what their next step should be to combat Bart Bogue’s (Peter Sarsgaard) greedy, homicidal prospector seeking to steal their land for pennies on the dollar. The way a revenger such as this works is by letting someone die so the inevitable search for a hero can ignite. That someone ends up being Emma’s husband Matthew (Matt Bomer) and his show of dignity in the face of a madman is as melodramatic as—and perhaps more violent and heartless than—you’d expect. But you buy into it because it leads to the action you’ve come to enjoy.

Denzel gets an appropriate introduction after the cut to black with a hellfire only a calmly confident lawman like his Chisolm could possess. He accepts Emma’s proposition—for reasons soon made clear—and finds his initial recruit in Pratt’s Josh Faraday right there in the bar he destroyed. His character’s a wild card: a gifted shooter with a drinking problem (that the film fails to render as an effective result of demons from his past) who loves to crack wise. He’s still a cowboy going for that hard-edged attitude Pratt cannot pull off when you know him from “The OC” and “Parks and Recreation,” though. James Gunn realized this, writing to his strengths for Guardians of the Galaxy, and no one has equaled that success since.

Faraday becomes the blatant comic relief with boundless quips utilizing Pratt’s wry grin before buckling back down into a blank severity. When the comedy works the comparisons to ¡Three Amigos! returned to my consciousness in a good way, but when his dry stoicism interrupts that relief I found myself praying Fuqua would cut away to someone more interesting as soon as possible. And maybe this is the inherent problem: screenwriters Nic Pizzolatto and Richard Wenk have crafted a motley crew consisting of too many eccentrics with ample intrigue that Pratt’s white-boy amateur magician can’t help but seem utterly bland by comparison.

Besides the fact they all become lazy fodder that Faraday racially derides for laughs, this diverse cast is a great thing for Hollywood and everyone ensures their characters are memorable. Manuel Garcia-Rulfo‘s Vasquez is a highlight if only because he keeps Pratt in check. He’s wanted for crimes that put Sam on his tail, but he possesses compassion underneath the bloodlust that pushed him over into joining the team. Martin Sensmeier‘s Red Harvest is a breath of fresh air if only because his Comanche doesn’t prescribe to the same style as the others. His bow and arrows are doing this because he’s a righteous man in search of a tribe that appreciates what it means unlike his brothers’ integrity being bought by men like Bogue.

Byung-hun Lee‘s Billy Rocks is similar to Sensmeier because he too is an outsider, constantly using martial arts moves to slice and dice with knives. More than action, though, I also invested in his relationship with Ethan Hawke‘s Goodnight Robicheaux—himself a conflicted ex-marksman seeking salvation in a way that renders him a liability—because you feel a kinship only mirrored by Emma and her town. The pair has fought in the trenches and have proven as honest as possible in the Wild West with hearts in the right place. And with them is Vincent D’Onofrio‘s Jack Horne to round out the seven: a welcome return to the days of yore when the actor never took a role without cultivating a memorably quirky voice.

It’s fun to watch them become a team and train the town while setting up booby-traps. This montage might be too quick to earn the mutual respect and camaraderie they show the night before war, but we’re talking about a popcorn flick. That stuff can be inferred if you desperately want it to work. Sarsgaard’s Bogue is very “El Guapo” in his theatrics and the climax introduces the tried and true cliche of powerful weapons combating a smaller yet fiercer opponent, so take it with a grain of salt because it’s your own fault if you thought this type of over-the-top operatic fight wouldn’t occur. The marketing may try to dress it up like a prestige picture, but Magnificent Seven is a summer season thrill ride.

And that’s okay. The world needs the ¡Three Amigos! treatment as much as they do Seven Samurai — just don’t expect anything more. Washington, Hawke, and Lee have come for prestige and they work opposite D’Onofrio and Pratt’s quirk; the rest of the gang toes the line to keep us having fun until the finale proves it isn’t afraid to wreak apocalyptic havoc. It may become too somber for the adventure that’s originally posed, but it would have been a full-on failure if Fuqua didn’t bare his teeth. I applaud him for that and the film for paying tribute in its own way. I still don’t know why Hollywood thought we’d need it when its target audience hates westerns, but here we are anyway.

The Magnificent Seven opened the Toronto International Film Festival and opens on September 23.