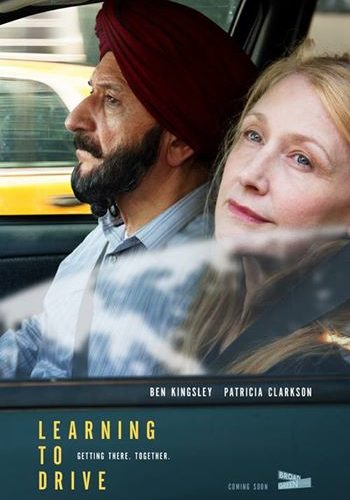 Adapted from a New Yorker essay and directed by Isabel Coixet (Elegy), Learning to Drive is often tender and delightful. Traversing territory covered in her previous work, including My Life Without Me, Coixet crafts light drama that seems perhaps a step out of sync with its New York setting. Somewhat lucid at times with flourishes of comedy, as enjoyable as individual moments are, it unfolds rather predictably.

Patricia Clarkson stars as Wendy, a literary critic whose marriage to Ted (Jake Weber) falls apart following the revelation he’s cheated on her with a younger colleague. Wendy, faced with a difficult choice, seeks a new adventure, attempting to free herself from her Manhattan routine. Her college-aged daughter Tasha (Grace Gummer) invites her out to Vermont, which lacks a sufficient public transit infrastructure. Thus she must learn to drive… both her life and a car. (Subtle, this film is not.)

Enter Darwan (Ben Kingsley), a Sikh driving instructor by day who entered New York pre-9/11 and moonlights as a cabbie. He’s saving money for his eventual marriage, a late development in the film that’s both sweet and an accurate embodiment of New York. The contemporary immigrant experience is a subplot here and isn’t quite as vivid as in Cedric Klapisch’s Chinese Puzzle, although it contains some very high stakes once Darwan’s history is revealed.

Often very on the nose, the screenplay, adapted by Sarah Kernochan from an essay by Katha Pollitt contains several nice and insightful moments, along with big laughs. The story of a woman of a certain age rebuilding her life is a common one these days in indie film (while great roles for women of a certain age at major studios are criminally rare). Learning to Drive is often pleasant but does not achieve the same insight, humor, and brilliance that Nicole Holofcener’s Enough Said achieved at last year’s TIFF.

The film largely succeeds because of its performances. Clarkson masterfully embodies the five stages of grief as she comes to terms with a new life. She confides in Darwan, who becomes a dear friend and confident, while Wendy’s other relationships feel slightly uneven, including her relationship with her daughter. Kingsley’s Darwan is oddly the more interesting and better-developed of the two stories; living in a crammed basement apartment, he protects his nephew from INS raids as they struggle to make a go of it in Queens. After all, as is spoken, “This is America, I can do what I want as long as they don’t ask for my papers.”

Like My Life Without Me, Learning to Drive contains a good deal of insight in a film that pleasantly recycles elements we’ve seen before with two stellar performances that elevate the material beyond what it might have been.

Learning to Drive premiered at TIFF and will open on August 21st. See our complete coverage below.