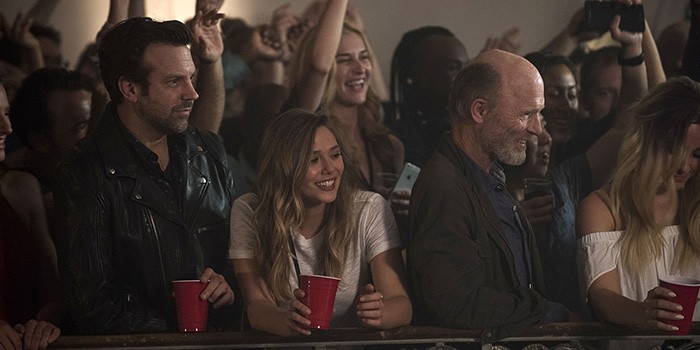 The world doesn’t need another film about an irredeemable artist who forsook his wife and child for his art only to begrudgingly (and fearfully through too many years ravaged by narcissistic cynicism) seek a second chance on his deathbed. We’d accept one if it did something different, though. Maybe the son isn’t guilted into being the “better person.” Maybe the father understands everything he missed and realizes it wasn’t worth dying alone. Just please don’t lean into the cliché by saying the hundreds of artists the father inspired make it okay that he abandoned the few he loved. Of all the trite moves you could make, that’s the worst. I’m sad to say writer Jonathan Tropper and director Mark Raso’s Kodachrome is guilty of more than a few.

Meet Ben Ryder (Ed Harris) — a famous curmudgeon, photographer, and self-aware artistic genius that’s dying of cancer. Well, don’t meet him yet. First meet his son Matt (Jason Sudeikis), a faltering record label executive who hasn’t spoken to him in over a decade. Matt just bullshitted his into not being fired by saying he has an in with one of the world’s biggest bands. So his day has been a struggle only made worse by his Dad’s nurse Zooey (Elizabeth Olsen) entering uninvited to say he wants him to drive them to Kansas and get a few “lost” rolls of film developed at the last Kodachrome-equipped establishment in America. He colorfully says, “No.” But since there’s no movie without that “no” turning into a “yes,” Matt gets extorted.

I’m not embellishing. Ben’s all-knowing manager (and deus ex machina) Larry (Dennis Haysbert) enters out of nowhere to say he’ll get Matt a meeting with that A-list of rock outfit if he drives his father. All integrity is thrown out the window so Matt can buckle and take the handout. Off he, Ben, and Zooey go to discover they’re exactly the people they know themselves to be. Add an impromptu visit with Ben’s brother (Bruce Greenwood’s Dean) and sister-in-law (Wendy Crewson’s Sarah) — the two who raised Matt after his mom died — and you could write the contrivances yourself. Will Matt and Zooey fall in love? Will Ben make things worse and hit rock bottom? Will the Ryders discover their anger is a front? Will we care about anyone? Tropper based his script on an article by A.G. Sulzberger. Its subject was Dwayne Steinle, the proprietor of the Kansas-based film development center that ultimately brought the final Kodachrome image to life in 2010. This means that the story of Ben and Matt is completely fictitious. They are a construct Tropper created to exist as patrons of Steinle’s so he could wax poetic about photos freezing time, being time machines, or doing whatever other cliché photos do. This discovery only makes things worse because it shows that he chose to write these characters as bland and familiar as he does. It shows just how rote cinema can be and why we need more original works of pure imagination rather than yet another umpteenth variation on a tired trope.

I kept hoping something more would happen, that Tropper and Raso had something up their sleeves. But they proved me wrong at every turn. Nothing happens without a very specific reason to be exploited later in the exact way you know it will. Anyone who doesn’t guess what’s on those “lost” film rolls as soon as they understand the dysfunctional family dynamic and Ben specifically needing Matt to help finish this journey is willfully ignorant or watching their first movie ever. I’ll give the filmmakers credit for one thing: putting a hiccup in Matt and Zooey’s relationship. Unfortunately “hiccup” means the film eventually course corrects to go right back on doing everything its paint-by-numbers checklist requires. At least Ed Kowalczyk got paid for a decent alternative rock gag.

Thankfully the performances try to elevate the plot since each character seems catered to the actor cast. Olsen’s Zooey is the weakest considering she’s merely the glue holding these two men together — the objective and subjective holder of attention to calm things down when they get too heated. But she’s having fun opposite Sudeikis’ cutting sarcasm regardless. She’s enjoying the quick-witted exchanges that keep his infinite bile in check. I wouldn’t be surprised to learn some of his dialogue is improvised because the timing and smugness behind every word is pure Sudeikis comedy. And while his dying father isn’t as complex as the one he played in mother!, Harris does earth-moving rage like no one else. Anytime his Ben feels weak, he unleashes on those within arm’s reach.

As such, he never earns redemption. This notion that daddy dying will melt the coldest of son’s hearts is lazy at best, patronizing at worst. All Kodachrome does is reinforce the chauvinism and entitlement too many fathers lean on to talk themselves out of feeling bad for selfishly abandoning their families. It reinforces that children should be forgiving and “less selfish” as far as believing they deserve more than the gift of life from parents. “Oh, but Dad changed the world.” Well then he can ask those for which he changed it for the better to drive with him across the country. He can’t get away with buying love with promises and refusing to reciprocate when receiving it for free. Please just watch Mad Men‘s “The Wheel” instead.