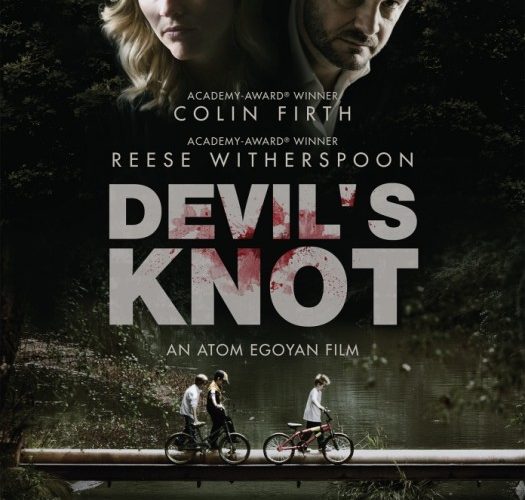 The most disturbing thing about the case regarding those most commonly known as the West Memphis Three is that some version of it can be still happening, right now. The details are public, thanks in large part to the documentaries by Joe Berlinger and Bruce Sinofsky, as well as Amy Berg‘s more recent West of Memphis, but the newest film on the subject, Devil’s Knot — a dramatization by master filmmaker Atom Egoyan — casts its glance toward the first part of this saga, only briefly including a scene wherein the efforts of those making Paradise Lost are required. The story initially focuses on the Hobbs family; Pam (Reese Witherspoon) and Terry’s (Alessandro Nivola) son, Stevie Branch, disappeared on May 5th, 1993, along with two friends, Michael Moore and Christopher Byers. Initially, the police do nothing, blowing off Pam and Terry until the community comes together. After fabricating stories and withholding evidence, the system targets three outcast youths: Damien Echols (James Hamrick), Jessie Misskelley (Kristopher Higgins), and Jason Baldwin (Seth Meriwether) claiming they had murdered the youths as part of a satanic sacrifice.

Egoyan draws on primary source material to document this miscarriage of justice, telling the story, like his earlier films, on grainy video and in beautifully lensed images by Paul Sarossy. Devil’s Knot draws on themes Egoyan has explored before, from the lost youth of Next of Kin and Adoration, the family tragedies at the core of Exotica and The Sweet Hereafter and themes of investigation & inquiry that have dominated his filmography. For Ron Lax (excellently played by Colin Firth), an anti-death penalty investigator who gets involved in the case, the journey is more professional than emotional. He, alone, becomes obsessed with the details of the case — not as a healing mechanism, but because he’s confused as to why those involve ignore and withhold game-changing evidence. Egoyan’s film focuses on the initial investigation and trials, before the likes of Peter Jackson, Natalie Maines, and Eddie Vedder took up the cause, joining Ron Lax.

Watching this play out in real-time verses in a documentary style, as Berg’s epic 150 minute West of Memphis had, offers an interesting contrast. Egoyan’s film is a slow build with a range of emotions — we feel sympathy, compassion, outrage and later intellectual superiority; this is not to say Knot is a condensing portrait of its central location, but rather that bad police work, manipulation and the need to save face cost three young men 18 productive years.

Devil’s Knot is a fine film, but those searching for Egoyan’s signature touches (which would seem apparent) will be left wanting more. The film plays it straight with dialogue direct from courtroom transcripts and primary sources. Oddly, this feels a little more like a Clint Eastwood picture than one by Egoyan. The performances are strong, including Kevin Durand as John Mark Byers (whose story is worth seeking out in West of Memphis), and Egoyan alumni Bruce Greenwood as the Judge who stacks the deck by refusing to broaden testimony. It’s also direct, with a script by Paul Harris Boardman and horror filmmaker Scott Derrickson (Sinister), while the more emotional elements are relegated to Witherspoon, who accommodates herself rather well. Like his previous film, Chloe, this represents a new mainstream direction for Egoyan, now on his 13th feature, yet he captures the atmosphere of loss, desperation, and mystery as vividly as ever.

Devil’s Knot premiered at TIFF, and one can see our complete festival coverage below.