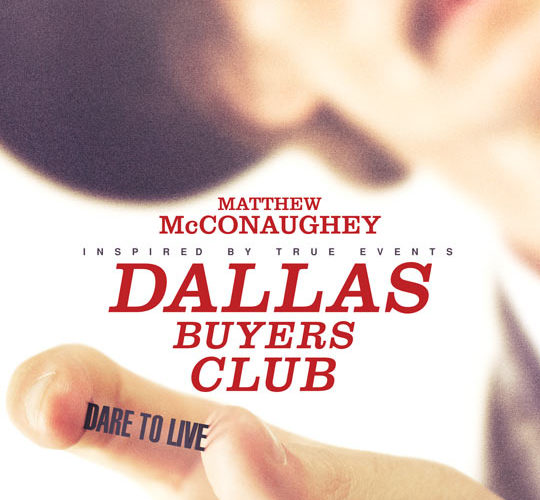 How do you stretch having thirty days left to live into seven years? You put in the work. Ron Woodroff (Matthew McConaughey) didn’t journey towards opening up the Dallas Buyers Club in order to stage a revolution against the FDA — he simply sought to prolong his own life. Director Jean-Marc Vallée’s film depicts this evolution as Woodruff’s homophobic cowboy becomes a champion of the LGBT community and a leader in the fight against government AIDS profiteering. It’s a story twenty years in the making as screenwriter Craig Borten met with the real Woodruff a month before his death in 1992, enlisted Melisa Wallack’s help to rework his script in 2000, and finally saw its debut at the 2013 Toronto International Film Festival. And it proves much more than a vehicle for the headline grabbing weight loss of its stars.

A perfect companion to last year’s documentary How to Survive a Plague, there’s nothing better than an underdog tale of personae non gratae taking their lives into their own hands when no one else is willing to help. Unlike those men and women who turned political protests into a grassroots scientific effort, Woodroff could have cared less about anyone else afflicted with HIV. He paid a hospital janitor to steal bottles of AZT for personal use before subsequently overdosing on them. He learned about alternative medicines from an unlicensed doctor (Griffin Dunne) in Mexico because he had nowhere else to go and only hours to live. The regimen’s FDA-unapproved vitamins and improved diet gave back strength and showed that while a cure was the endgame, keeping the disease in check was step number one. Well, it also gave him a moneymaking idea to exploit some green off of the hundreds of other HIV-positive residents of his Texan city. These homosexuals were barely human to him anyway—merely fodder for the bigoted vulgarity of he and his friends’ sanctimony. That’s before those same friends began doling it out to him too after discovering he was a carrier. But while we can blame them all for their insensitivity and abusive natures, the real culprit was their complete ignorance towards what AIDS was. Woodruff himself didn’t accept his diagnosis until reading at the library that unprotected heterosexual intercourse could also transmit the virus. So what reason did best bud T.J. (Kevin Rankin) and the crew have to listen? Scared and confused, Woodruff probably wouldn’t have either if roles were reversed.

He is a fascinating case study as a result—combative with doctors Sevard (Denis O’Hare) and Saks (Jennifer Garner), disgusted with gay patients sharing his plight, and a self-righteous womanizer who goes home to a pair of willing ladies right after learning his fate. But he doesn’t sleep with them. He stops himself knowing in the back of his mind that something wasn’t right. It’s a wonderful moment of clarity on behalf of McConaughey and the driving force behind his self-educating about prospective cures. Warming towards his community of pariahs, however, wouldn’t come so easy. He’ll allow himself to proposition Rayon (Jared Leto)—a happy-go-lucky transgender who helped him once despite the unchecked vitriol towards her way of life received in return—to become his business partner, but friendship is a whole other matter. No, for many closed-minded individuals so deeply ingrained with hate, it’s only when the object of their abhorrence arrives inside their home that they remember their humanity — just look at Republican Rob Portman. Change can happen and while it often takes more effort than should be necessary, forgiveness still goes both ways. A gradual alteration on behalf of Woodruff, being in the trenches so fervently and for so long can’t help but transform him into the hero he ultimately becomes. The path is rocky, but blindness is eventually cultivated towards concepts of gay and straight as the communal effort of AIDS patients against Big Pharma trumps all. It propels him into the discovery of “buyers clubs” and springboards him to the forefront of the fight for legislation to allow dying citizens the right to chance alternative medication.

The “buyers club” is actually an ingenious idea where memberships are sold rather than the illegally imported proteins and pharmaceuticals it gives access to directly. FDA Agent Barkley (Michael O’Neill) unsurprisingly does his best to shut it down while Dr. Sevard refuses to accept Woodruff’s records as research since AZT’s manufacturer is in bed with the medical board. They put as much heat as possible on Ron’s lawyer David Wayne (Dallas Roberts) while Woodruff continues traveling the world for drugs America won’t allow on the market. The club does gain some traction as Dr. Saks’ lends support, but every victory is met with multiple setbacks as new laws pass and pressure increases. Ron’s tenacity becomes more stalwart in response, though, as his membership grows in direct proportion to Sevard’s dwindling AZT test attendance.

McConaughey is the face of this film, but not because he plays the lead. This is his most nuanced performance to-date—one combining his fine work from The Lincoln Lawyer with his weightier turn in Mud—with a balance of humor and fearless determination. A man of disguise while smuggling and an unrelenting charmer with Garner’s Saks, his likeable troublemaker with dark streaks of bigotry becomes a man worth emulating before our eyes. Beyond the dedication to lose fifty pounds in four months, we see his total embodiment of Woodruff through the perpetual fierceness of his eyes whether strong, weak, angry, or joyous. Vallée counts the days off from 1 to 2557 with as much honesty as possible by letting his actor rule the frame without unnecessary aesthetic flourishes. The performance truly speaks for itself.

But while he is the face, it’s Leto who provides the heart. What could easily have become a caricatured stereotype of feminine sass to gradually whittle away at Woodruff’s machismo, Leto’s Rayon instead gives us truth. Yes, the character infuses a healthy portion of comic relief, but it’s never forced or insincere. We see her frustration instantly morph into compassion as she ignores Ron’s discriminatory nature to show kindness when no one else will, wedging herself into his life as a beacon trust and kinship despite his prejudices. Her own progression through the disease will tear your heart out and whether it’s seeing her purposefully don a suit or lay prone on the floor too weak to inject her protein, she’s the epitome of humble humanity still surviving after the world has given up.