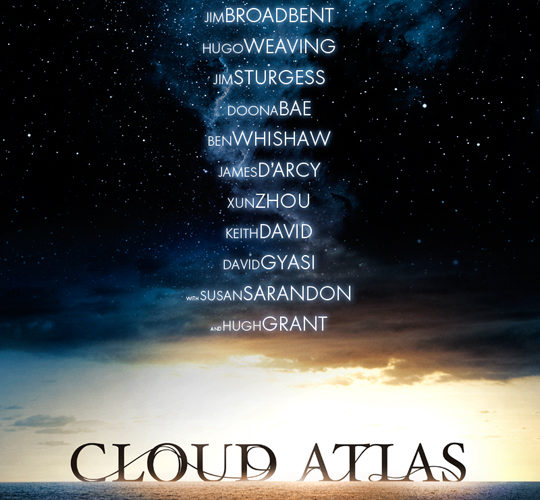 In grand fashion comes an epic about freedom and the wrongs of humanity forever marring how we’re seen through the annals of time. Every misstep is repeated; every stand against oppression spawned from the voice of one strong enough to understand equality’s worth over the cowardice of blindly hiding behind religious or societal rhetoric. There will always be some faction of life deemed unworthy, dirty, incomplete—some species, race, invention for us to lord our superiority over. And it isn’t about stepping back to gain perspective or to delve into the past so that you can uncover the patterns recycling themselves in perpetuity. No, for the human soul to survive against its own constant love affair with destruction, we must dive headfirst into the fray. Until we’re willing to give our life for our immortality, it will never be attained. Filming the unfilmable, Lana and Andy Wachowski‘s bombastic scale teams with Tom Tykwer‘s delicate precision to break apart David Mitchell‘s novel Cloud Atlas and piece it back together so their utterly unique tome can explain the universality of the human soul and its struggle between light and dark. Rather than retain the source material’s sextet of stories in episodic fashion, however, they’ve decided to interweave each by compressing time and space into reality’s infinitely revolving loop. The actors portray characters in each plot line, connected to one another by love—heroes mostly staying heroic and villains unceasingly evil. We comprehend their wants and desires as each tale overlaps and acknowledge early on that we know exactly the type of man or woman they are in their hearts.

As Zachry’s (Tom Hanks) frightened valleysman 106 years after the fall of civilization is unable to ignore the visions of Old Georgie (Hugo Weaving) whispering selfishly vile seeds of inaction, we pray he’ll prevail. When Robert Frobisher (Ben Whishaw) looks to better his lot in the employ of master composer Vyvyan Ayrs (Jim Broadbent) and finds only anger and tragedy, we hope his ideal of beauty will survive. And as Luisa Rey (Halle Berry), Adam Ewing (Jim Sturgess), and Timothy Cavendish (Broadbent) find the world crushing their resolve to the point of death, we imagine good of some kind will assist them. Maybe the direct result of a seemingly innocuous action made by the victim or their family previously—every action has the ability to change history.

Cloud Atlas doesn’t merely stick characters influencing others or high ideas of reincarnation placing each in a meaningful position through time—it also uses their legacies. Frobisher’s magnum opus symphony from the 30s becomes an enduring marker of hope; Cavendish’s retirement home jail break of 2012 a movie to possibly help a year 2144 fabricated life transform into a God; the 19th century diary of Ewing’s dying lawyer timeless inspiration; and love letters half a century old reborn as familial history of happier days expired. Our immortality is manifested through our work; one word, note, altering everything. Art survives via emotion and remains long after its creator is gone. This is how we never truly die—everyone on Earth touching at least one person who won’t forget. Mitchell’s novel is full of lofty insights distilled here in a way that aligns tonal similarities together. Imprisonment, escape, action, drama, and comedy exist in each of the six stories, growing stronger alongside their partners’ equally emotive shift. Epiphanies occur simultaneously and yet decades apart. Mankind is always left for dead and yet able to rise to the occasion when necessary. The phrase “the weak are meat and the strong do eat” comes up often and it is very apt when concerning the themes of slavery and power running rampant, but what the strong don’t realize until too late is how the weak won’t stay prone forever. Eventually they’ll have a spark of recognition to act legally, illegally, morally, or amorally. Retribution and justice will be served and the cycle will restart.

As such, it’s a brilliant move using the same actors in each component. Alluding to reincarnation, soul transfers, and the like, I never thought the familiar faces hindered the whole once. People in the audience complained about feeling it was like someone was flipping the channels on them, but to me every transition was thematically relevant. We cross between timelines at precise moments to strengthen what came before and what comes next. The emotional impact couldn’t be the same if told linearly. We need the mixed bits and pieces to understand the optimism for the future otherwise hidden beneath the depression and tragedy. Sturgess’ abolitionists concurrently strive for better; Hanks’ roles are constantly compared to show an evolution from villain to hero; and Berry’s unwavering idealism lives through the years.

If there were a caveat to this technique, however, it is the make-up. Varying from authentic to laughable, this crutch finds a way to deter from across the board stellar performances. It’s no surprise the best are Doona Bae‘s innocent and immensely integral Sonmi-451, Broadbent’s hilariously bumbling Cavendish, and James D’Arcy‘s intensely romantic Rufus Sixsmith since all act pretty much unencumbered. Adding big noses to Hanks and Susan Sarandon isn’t enough of a change to appear real and the Asian-ifying of Sturgess, D’Arcy, and Weaving is too much despite their futuristic locale. The intricate labyrinths drawn on post-apocalyptic valley dwellers, Grant’s cannibal paint, and Weaving’s demonic Old Georgie are all fantastic, though, beautifully rendered with the amazing special effects (re)creating each era.

But in the end, Cloud Atlas is about the underlying themes and humanity’s constant refusal to learn from its mistakes. It’s easy to assume the actors are playing new versions of themselves as time progresses, but the inclusion of a shooting star birthmark should prove you wrong. There’s more at play than what the surface reveals and you must give into the artifice to let the spectacle consume you and help explain how these souls are passed into new bodies and new lives. Romantic hope and love move through time, race, gender, and species, beating us over the head with the one truth we still have yet to accept. All men are created equal and should be treated as such no matter what.

Cloud Atlas screened at TIFF and opens on October 26th.