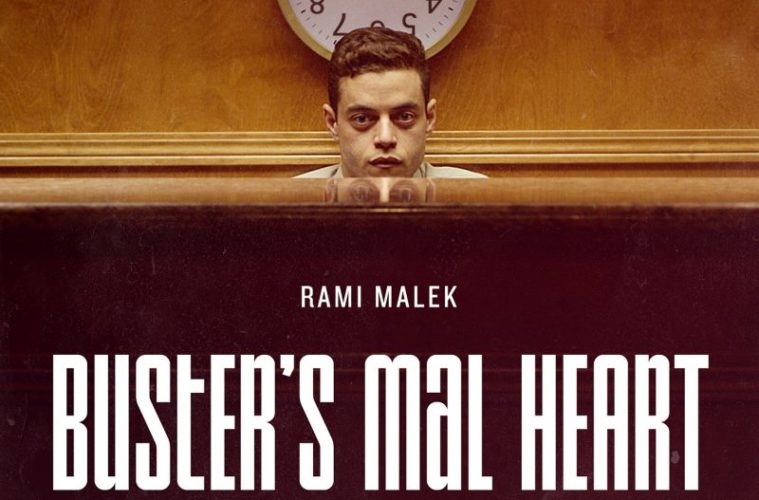 After making an impression in films from Paul Thomas Anderson, David Lowery, and Spike Lee, thanks to his new exposure as television’s most intelligent anti-social hacker, Rami Malek has graduated from indelible supporting character appearances to the coveted leading role. His first endeavor in the arena comes with Buster’s Mal Heart, a structurally oblique, emotionally flat drama which finds him once again embracing the peculiarities of the human psyche.

Opening on a pristine lake as the sun sets, we find Malek’s scraggy Buster adrift on a boat sitting face-to-face with another man — or is it? After the title card, he’s in better physical shape, but hunted in the woods, evading gunfire and on the run. Things get progressively better for our lead in the next time jump, as we see Buster’s past life as Jonah, working at a dead-end job as a hotel concierge, but doing it all with dreams to achieve the self-sustaining life of freedom that he desires for his wife Marty (Kate Lyn Sheil) and their young daughter.

In her sophomore feature, writer-director Sarah Adina Smith (The Midnight Swim) flips between these three time periods (distinguishable thanks partly to the distinct locations, but mostly to the length of Buster’s facial hair) as the story congeals towards the inevitable goal of finding out what made Buster a psychologically damaged fugitive in the first place, and if may truly find any peace. At his concierge job, the arrival of a mysterious, conspiracy-obsessed vagabond (DJ Qualls) signals we’re actually in a period piece as the dangers of Y2K come into play. As we flash back to the gaunt, unhinged Buster, we realize he’s eventually bought into these notions of an impending apocalypse, in a plan for survival that involves jumping into a “sphincter,” evidenced in drawings and calls to local radio station hosts who believe he’s pulling a prank. While these threads could have led to an intriguing sci-fi bent, the ideas are never delivered with enough clarity to truly make an impression.

This unfortunately extends to much of the other drama as we find a filmmaker who is grappling with complex themes of grief but lost in state of incoherence. A devil’s advocate might wager this is to put us in the shoes of our disoriented protagonist, but when it’s finally time to lay her cards on the table, Smith oscillates from too-obvious visual metaphors (particularly when it comes to two diverging roads) to a finale that mistakes giving us what our character hopes for — regardless of logic — for genuine emotional catharsis.

As we learn more about his current state, Malek’s “Buster” persona has been built up as a myth by the locals as he raids vacant vacation homes for supplies, correlating with a loosely hinted past life as a homeless person. As one might expect, the actor has invigorating intensity, from the ever-increasing bags under his eyes as his job sucks the soul out of him to veins bursting from his head as he recalls a tragedy. Despite Jonah/Buster failing to register as a fully-formed character, scene-by-scene it’s difficult to not by drawn into his actions, delivered with a reticent menace by Malek, however random they might seem.

As the psychological state of our lead becomes greater divulged and we head down a more sadistic and grim route, Smith’s comedy bubbles up, but it only comes across as misplaced. Jokes about not allowing guns at the table in the middle of a kidnapping and jabs at religion feel, quite literally, like an angry voice shouting into the abyss, and are more distracting then diverting. Smith, also serving as editor, uses a handful of effective match cuts, featuring frogs, soggy pizza, a fishing pole, and more, to segue between the various time periods. Making the most of their Montana location, cinematographer Shaheen Seth shoots the snowy mountain vistas with a pristine touch, making up for some of the flat lighting when it comes to the familial drama.

The structural concepts are all here to create an intriguing psychological drama, but the lack of realism when it comes to the supporting cast of caricatures makes for a tenuous emotional foundation. Despite a committed lead performance and flashes of finding beauty in the bizarre, Buster’s Mal Heart loses confidence as it proceeds, resulting in a journey of half-formed ideas that could’ve used as much focus as Malek’s dead-eyed glance.