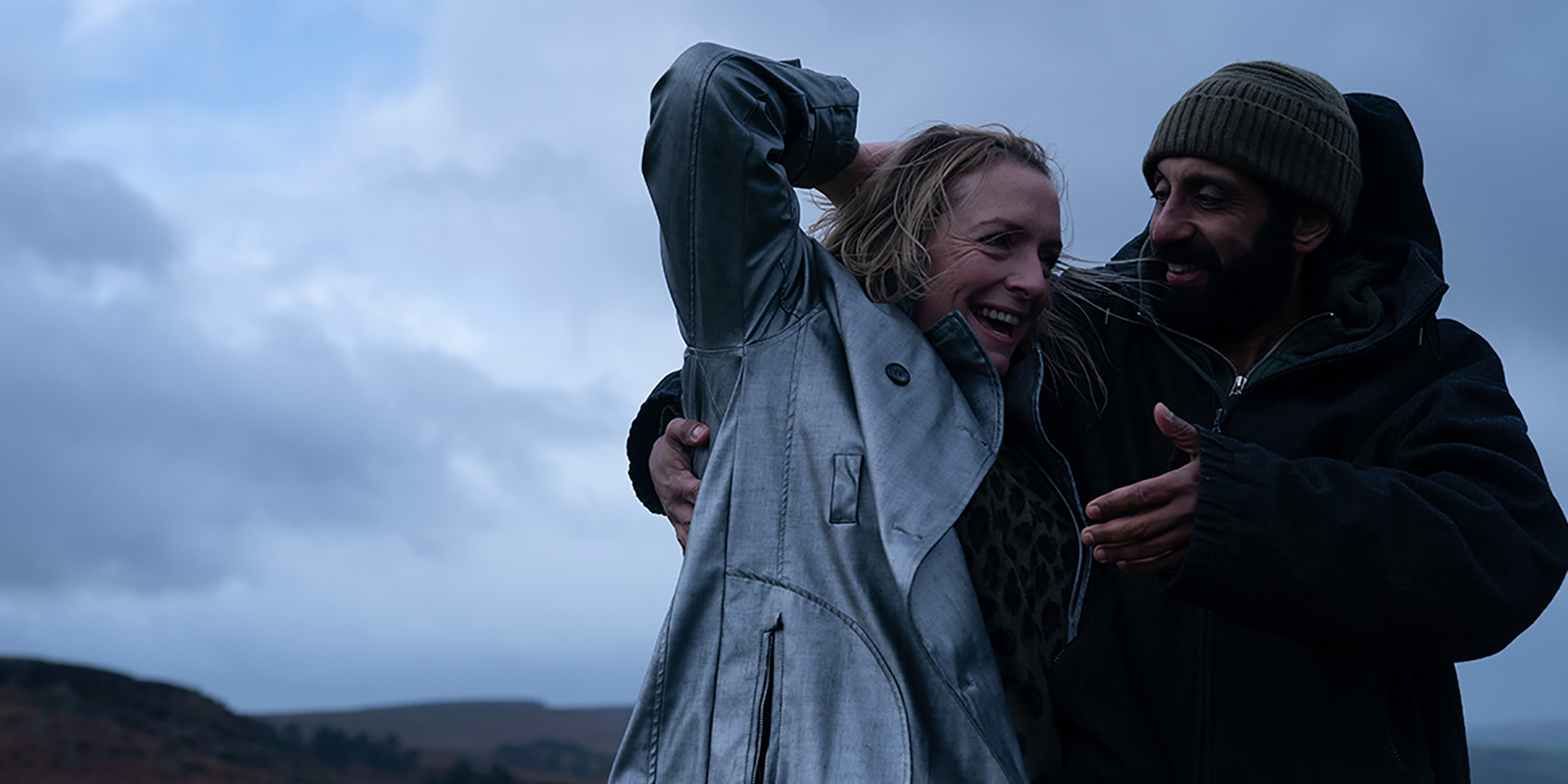 Their differences are plenty. Her heritage is Irish; his is Pakistani. She lives in a part of Britain where he knows to worry about getting stones thrown at him; he lives amongst a diaspora of immigrants from Europe and Asia. She has four kids and five grandkids; he has a wife with whom he’s separated yet still unable to admit it to his family, for they wouldn’t approve of letting her stay while she finishes school. The one thing Ava (Claire Rushbrook) and Ali (Adeel Akhtar) do have in common is a little girl named Sofia (Ariana Bodorova). Ava provides educational assistance during her schooling as an aide. Ali employs the girl’s father to help him look after his properties and tenants, of which he’s also one.

Fate brings them together. A downpour keeps little Sofia under an awning with Ava as Ali pulls up to take her home. He offers Ava a ride—not yet knowing where it will take him—and ultimately endears himself to her upon enduring those stones with a smile while cranking up a rap song on the radio and dancing amongst his young assailants before offering them a ride too. These fast friends laugh and sing (him pop / electro, her country / folk) until finding themselves happier than they’ve been in quite some time. Ali’s depression and loneliness has stemmed from seeing the woman he loves (Ellora Torchia’s Runa) every day without hope of reconciliation. Ava’s arises from looking at her son (Shaun Thomas’ Callum) and granddaughter to remember how bad things were.

Romance is thus born when least expected. Writer-director Clio Barnard splits focus as they each wallow in their past, get excited about their present, and work through the awkwardness of contemplating dating post-40. Their rapport is sweet, in large part from Ali’s inability to slow down or stop acting with the enthusiasm of someone half his age jumping around and singing at the top of his lungs and Ava’s heart of gold where it comes to her children (biological and educational alike). For all those differences stated above, though, their union can never be something that simply manifests overnight without myriad complications. Despite Ali & Ava proving a heartwarmingly funny and rich love story, its strength truly lies in the characters’ melancholic confrontation with their underlying pain.

There’s a lot to be discovered, too, once their relationship blossoms to the point of sharing more about who they are and being seen by those not yet ready for their coupling (his family believing he’s cheating on Runa and her son believing she’s disgracing his late father’s memory). Barnard’s schedule of revelations is exquisitely measured for optimal dramatic and emotional impact by her refusal to ignore the stark reality of life merely because love is in the air. Current happiness doesn’t negate all the feelings that have piled up since the last time these two felt that dopamine hit. They aren’t the type to use the other as a shield to distract themselves from their struggles either. To avoid that, however, means being honest with themselves.

It’s about closing chapters before opening new ones. It’s about allowing themselves the room to be selfish despite everyone else counting on them to be the selfless versions they know. The more they retreat from their own truths, however, the more difficult it becomes to rip off the Band-Aid and tell those who are disappointed in them that their frustration and anger is built on a faulty premise they helped construct. The film inevitably goes to some dark places; both Ali and Ava would rather their loved ones hate them than those their secrets have been trying to protect. How can he feel safe knowing her son’s rage might kill him, though? How can she trust him if appearances keep postponing his divorce?

Their meeting is thus as much about who they become together as it is finding the strength to be who they want to be alone. Ali must break free of the idea in his head that he and Runa are still a package deal while Ava must find the courage to extricate her husband from her kids’ nostalgia due to them having been too young to realize just how bad things were. And it’s only through being with each other that they are reminded of what they each have to offer on their own without that baggage that had detrimentally become part of their personalities. They can sing, read, and dance. They can laugh without worrying about what others might think. They can be their long-lost selves again.

That we get glimpses into those selves via their own unique soundtracks is upliftingly inspirational. It’s never about projecting what they like onto the other, either, even if their respective elation in it inevitably opens the other up to experiencing it with newfound interest. There’s a brilliant scene where Ali cajoles Ava into climbing atop her couch to belt aloud what they are each listening to, irrespective of the other. Barnard shifts the auditory channel from him singing his to her singing hers, showing it’s not about deriving pleasure from the other’s art of choice but rather from seeing how much pleasure the other is deriving from it and feeding off their reaction. It’s the smile and excitement borne from the music rather than the music itself.

The same goes for their growing affection. Maybe they don’t agree with the lies by omission they are each telling their families, but they understand why those lies are being told. Their vulnerability and sadness are relatable just as their mutual empathy allows them to see past surface-level fears to expose the warmth and passion desperate to escape from beneath. And we absorb it, too, thanks to Rushbrook and Akhtar’s complexly three-dimensional performances that prove as infectiously humorous as they are devastatingly honest. That’s what love entails, after all. Its fire burns regardless of the strife it also causes. Even when it ends, the tragedy and trauma driving its dissolution doesn’t have to also erase the thrill of what was otherwise good and pure.