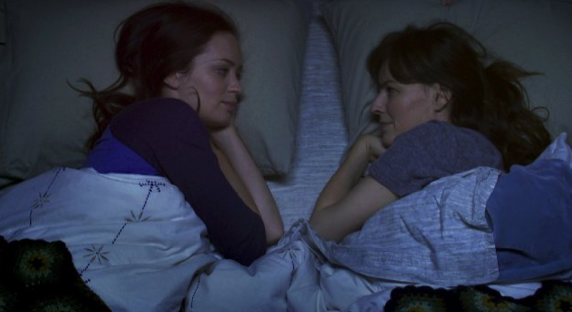 First off, days before its world premiere Sunday, mumblecore writer/director Lynn Shelton‘s comedy Your Sister’s Sister has been bought by IFC Films, who secured distribution rights for North American and Latin American territories. Shelton’s last effort, the wickedly funny buddy-dramedy Humpday, won the Special Jury Prize at Sundance in 2009 and scored an Indie Spirit Award for being the best low-budget feature. While Humpday starred Mark Duplass as a married man whose misguided quest for machismo and proof of loyalty to a childhood bud leads him into the world of amateur gay porn, Your Sister’s Sister has the mumblecore icon playing a mournful man who finds himself entangled in a love triangle with his long-time friend (Emily Blunt) and her sister (Rosemarie DeWitt). As an ardent fan of Humpday, I’m eager to see Shelton’s latest, but sadly, we’ll all have to wait until summer of 2012 for Your Sister’s Sister’s debut. {Source: Variety} In other news, Oscilloscope Laboratories, which this year distributed Kelly Reichart’s moody western Meeks Cutoff and the controversial hipster-drama Bellflower, has snatched up Brit-director Andrea Arnold’s engrossing adaptation of Emily Bronte’s Wuthering Heights. (You can check out Jordan Raup’s review here.) Arnold have previously drawn acclaim for her gritty voyeur drama Red Road and her disturbing coming-of-age drama Fish Tank, which centered on an incestuous May-December romance and featured rising star Michael Fassbender. Wuthering Heights‘ biggest star is Kaya Scodelario of Skins fame, who plays Catherine Earnshaw, the young women drawn into a tragic and brutal love triangle. Despite the speedy deal-making, eager Bronte fans will have to wait until 2012 to see this Wuthering Heights. {Source: THR}

Which of these love-triangles are you most excited to see hit theaters?