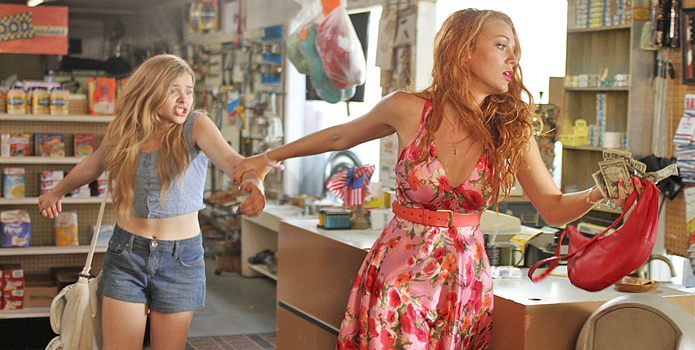 With the Toronto International Film Festival kicking off in less than a month, we’ve got a batch of new images from some world premieres. Above you can see the first image of Chloe Moretz and Blake Lively in Derick Martini‘s new drama Hick, coming off the celebrated indie Lymelife. The duo is also joined by Alec Baldwin, Juliette Lewis, Eddie Redmayne and Rory Culkin. Check out the synopsis below.

Tired of fending for herself and her mother‟s penchant for hard-drinking men and barroom drama, 13-year-old Luli hits the road on her own, heading west to realize her dream of becoming a superstar. Among her travels she meets Eddie, a drifter with a chip on his shoulder, and Glenda, a troubled but spirited woman who takes Luli under her wing. Luli‟s quick wit, some help from Glenda, the mercurial Eddie, and her colourful daydreams help protect her from the incredibly unpredictable band of characters she encounters on her journey. Hick is a road picture about a young girl who comes face-to-face with the realities of just how complicated adulthood can be. We also have the first image from Jim Field Smith‘s She’s Out of My League follow-up, Butter. We see Jennifer Garner above, but the strong cast also includes Olivia Wilde, Hugh Jackman, Ashley Greene, Alicia Silverstone, Rob Corddry and Kristen Schaal. Check out the synopsis below.

Set in the highly competitive world of championship butter carving, Butter blends social commentary, outrageous comedy and heartfelt drama in telling the story of the ambitious Laura Pickler (Jennifer Garner), the self-anointed First Lady of Butter Carving. Refusing to accept that her husband (Ty Burrell) wants to step down after his 15-year run as the “Iowa State Butter Carving Champion,” and therefore end the Pickler family‟s reign in the spotlight, Laura takes a stab at the title herself. But her bid for glory is complicated when two unlikely contestants enter the race – one, her husband‟s hard-living mistress (Olivia Wilde), and the other a 10-year-old foster child named Destiny (Yara Shahidi). Enlisting the help of her high school sweetheart, Boyd (Hugh Jackman), Laura will stop at nothing to be crowned champion, even if it means resorting to sabotage. Part political satire, part Capra-esque comedy, Butter is a story about what it means to win at all costs and against all odds. Next up we have the first look at the drama from frequent Entourage director Julian Farino‘s The Oranges. Catherine Keener, Hugh Laurie, Leighton Meester, Alia Shawkat, Adam Brody, Allison Janney, and Oliver Platt are all part of the cast and you can see the image above and a synopsis below.

The Ostroff and Walling families are best friends and neighbours, living across the street from each other on Orange Drive. Prodigal daughter Nina Ostroff (Leighton Meester) returns home for Thanksgiving dinner after a five-year absence, newly broken up with her fiancé Ethan (Sam Rosen). Rather than developing an interest in the successful son of her neighbours, Toby Walling (Adam Brody), which would please both families, it‟s her parents‟ best friend David Walling (Hugh Laurie) that captures Nina‟s attention. When the romantic attraction between Nina and David Walling becomes too great to ignore, the lives of the two families are thrown into upheaval. It is not long, however, before the ramifications of the affair begin to work on the other family members in unexpected, hilarious and even positive ways, leading everyone to reassess what it means to be happy, and how to find happiness with, and perhaps in spite of, your own family and friends. Lastly we have a batch of new images from the highly anticipated next film from City of God director Fernando Meirelles. His drama 360 stars Jude Law, Anthony Hopkins, Rachel Weisz and Ben Foster. Check out the images above and below, along with a synopsis. Inspired by Arthur Schnitzler’s classic La Ronde, in 360, director Fernando Meirelles and screenwriter Peter Morgan combine a modern and dynamic roundelay of original stories into one, linking characters: from different cities and countries in a vivid, suspenseful and deeply moving tale of love in the 21st century. Starting in Vienna, the film beautifully weaves through Paris, London, Bratislava, Rio, Denver and Phoenix into a single, mesmerizing narrative.